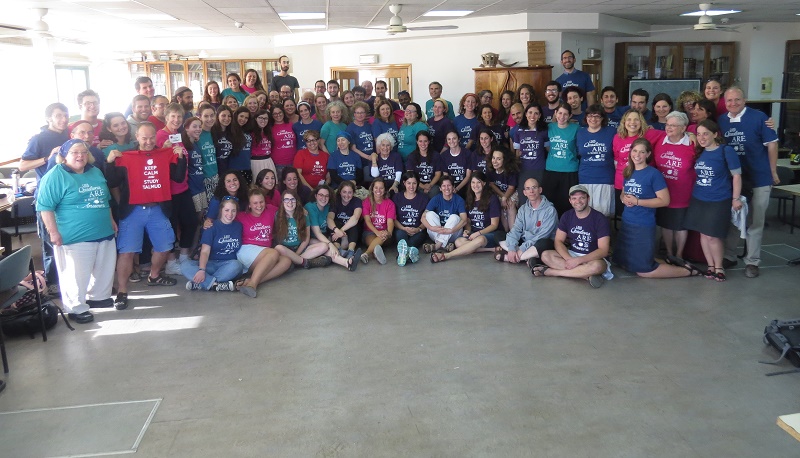 Pardes Summer 2015: The Tale Of A Brand Evangelist

If I told you I was going to study in a Yeshiva or a Seminary – or even that I was going to study Talmud – you would immediately make assumptions about the learning environment. First, it would be divided upon strict gender lines. Then there would be a dress code – at least the women would be Continue Reading »

Jerusalem is a place I dream about, a place I begin to yearn for as soon as I am back home (?) from it. I had planned my study at Pardes long ago, thanks to Yaffa Epstein; and that’s when I wrote this little verse: Seeing you in my dreams Craving your warm embrace Hoping Continue Reading »

Sitting in the Beit Midrash earlier this week, I casually flipped open a Tanakh to begin jotting down some thoughts for this blog post. What’s Parshat Naso all about, anyway? I opened up Bemidbar to find out. And then I realized I was about to write a Dvar Torah about the longest parsha ever. No, Continue Reading »

Why Swarthmore’s Hillel Should Not Become “Open”

I wrote this to Swarthmore’s Hillel in hopes that it would engage them in responding to me. I have heard nothing. I expect that some Pardes students may be interested and want to challenge/ agree/ expand my thoughts. In Support of Hillel “Guidelines” Why Swarthmore’s Hillel Should Not Become “Open” On December 8, 2013, Swarthmore’s Continue Reading »

One month was not long enough

Posted on April 2, 2014 by Ilana Arje-Goldenthal

When I received my acceptance letter from Tel Aviv University (TAU) Law School to do a semester of exchange, I was surprised that the semester only began on February 16th. I calculated the time between completing the fall semester in Toronto and beginning the winter semester at TAU, and realized that I would have over Continue Reading »

From my blog: Last night, after school, I went with the Director of Jewish Life and her five year old son to watch a hockey game between JDS (the school where I’m doing my student teaching) and Israel. I didn’t know that Israel had a youth hockey team, but they were touring DC all the Continue Reading »

My Personal Experience at Pardes

Posted on March 3, 2014 by Eileen Gamzuletova

Once I finally arrived home, after twenty seven hours travelling time, my mother asked me, “What was the best thing you gained out of your time at Pardes?” to which I answered, “A sense of belonging.” Upon completing my formal education in a Modern Orthodox and Zionist school, Mount Scopus College, and commencing life in Continue Reading »

Thoughts on Constructive Conflict and the Pew Study

Posted on February 6, 2014 by Deborah Renert

As I reflect on Rabbi Daniel Roth’s introduction to “Constructive Conflict ‘for the Sake of Heaven’…” I cannot help but also reflect on the Pew Study, and the Pew Survey program which took place here at Pardes this past December. The Pew Research Center published on October 1st 2013 findings that reflected that the intermarriage Continue Reading »

Posted on December 28, 2013 by The Director of Digital Media

From my blog: A few weeks ago, an actress came to Pardes to do a kind of skit, stereotyping Four Faces of Israel, or four different people that one will inevitably encounter in Israel. She portrayed the narratives of a Haredi woman, a settler, a kibbutznik and an Arab woman. Somehow, every experience that I have, Continue Reading »

One of the most exciting things that can happen in Jewish education is when one Jewish school meets another. This past week my two Jewish schools collided, Pardes and The Weber School. Although we are all different ages, ranging from high school to post-college to grandparents, being Jewish and being in Israel brought us together. Continue Reading »