Posted on December 28, 2013 by The Director of Digital Media

A few weeks ago, an actress came to Pardes to do a kind of skit, stereotyping Four Faces of Israel, or four different people that one will inevitably encounter in Israel. She portrayed the narratives of a Haredi woman, a settler, a kibbutznik and an Arab woman. Somehow, every experience that I have, everyone that I encounter, draws my mind back to that day. The more I think about it, the more I realize that there is so much more to the melting pot that is Israel because of all of the people that don’t fit into the portrayal. I’m on the Social Justice Track at Pardes, a class designed to teach a wide range of text relating to various social justice topics and show students what’s actually going on in Israel. For the first part, we sit in the beit midrash, the house of study, discussing with our hevruta, study partner. For the second part, we take field trips, talk to tour guides, but more importantly, talk to individuals.

While the people that we have met have been vastly different, one thing echoes from their collective stories — that they’re happy to tell us their story and wish that we tell it to others. I’ve alluded to these individuals in some of my other blogs, but I wanted to dedicate a series to the stories of these people, with whom I’ve crossed paths. 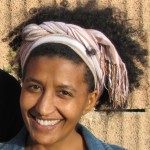 The first is Yuvi Tashome, who I met in Gedera. Yuvi’s full name comes from a word in Amharic, the language of Ethiopia, meaning good product. Yuvi’s mother, who I will call Ruth although Yuvi didn’t tell us her name (for the sake of keeping the story less confusing), was born in Ethiopia. Ruth’s parents were divorced shortly after she was born, but her mother remarried. In Ethiopia, Yuvi told us, it takes one year to prepare for marriage – you have to invite people, prepare the food, prepare the clothing, prepare yourselves. Yuvi’s step-grandfather was busy preparing for the wedding of his nephew. However, one month before the wedding was supposed to happen, the bride dropped out. After 11 months of planning, how could the wedding not happen? Yuvi’s step-grandfather told his family not to worry, he would find a replacement. He chose 10 year old Ruth. Although she was a little younger than the average age of 15 for marriage, she was perfect for the role.

Yuvi told us, ”If you ask my mother today what she remembers about the wedding, she will tell you that she loved wearing the dress.” Ruth went to live with her new husband’s family and Yuvi said it was like playing house. When Ruth’s husband wanted an older, more mature wife, a year later, he divorced her and she returned home, but she got to keep the dress. Amongst the Jewish community in Ethiopia, when looking for a suitable mate, you have to find someone who is Jewish, but also not related to you for 7 generations. In such a small community, this is often difficult. Yuvi’s father, ready to marry, was riding around villages on horseback, looking for a wife when he met Ruth. After getting married, Ruth went to live in his village and they had two children, Yuvi and her brother. Shortly thereafter, Ruth’s husband died.

The heads of the village that they were living in told Ruth that she had to leave because she didn’t belong to their linage anymore. Oh, and that she had to leave the kids because they did belong. As any good mother, Ruth thought on her feet. She approached the head of the village and said, “Let me just take my children to say goodbye to my parents and then I will return them.” Of course, she left her children with her parents and returned to the village, accompanied by a man. She knew that, according to Jewish law, she was entitled to half of everything that she and her husband owned and she brought the man to negotiate on her behalf with the head of the village. A religious man, the head of the village gave Ruth everything that she was entitled to and she returned to her family’s house. At this point, Ruth was 20. All of the other people her age were students and Ruth became friends with most of them.

“At this point in her life,” Yuvi said, “Jerusalem was a heaven that you only get to when you die.” Ruth realized that she was uneducated and that going to Israel was her only option for success. She approached a group of students who were planning to go. Initially, because she had two young kids, the group said she couldn’t come. Ruth approached each member of the group, individually, and convinced them that she should be allowed to go with them. When they had all agreed that Ruth could come with them, they informed her of their plans and told her that she had to choose one of the kids to bring and leave the other child in Ethiopia. She chose Yuvi’s brother, because he was still breast-feeding, and left 4 year old Yuvi with her parents. (Although Yuvi doesn’t know exactly how old she was, or is now, because she doesn’t know her birthday.) Ruth made her mother promise to protect Yuvi no matter what it cost. If there was a situation where their lives were in danger, Ruth’s mother should sacrifice herself to save Yuvi. Then Ruth was just gone – they had no idea if she made it or what happened to her.

Six months later, the entire village left for Israel, including Yuvi. They sold all of their possessions to pay an extremely high price for a guide. Because she had no parents, while everyone else walked, Yuvi rode a donkey. When they finally got to Sudan, the group was beyond exhausted. “It was really hell. I don’t know how people went through it and then managed to live a normal life in Israel.” As each week went by, more and more people died and less and less people went to the funerals.

Her grandmother sent Yuvi to another area so that she would be safer for a short while and they met up with each other later. They would hide during the day and walk at night. Once Sudan had a relatively good relationship with Israel, Sudanese officials came around with elders from the community to verify that the entire group was from the place that they claimed to be from and that they were giving the right name. Once they were verified, they were put on a list of Jews. When the planes landed and everyone arrived at the airport, the officials would look for your name on the list and check you off as you boarded the plane. Yuvi’s grandmother looked around and realized that her grandfather wasn’t there. “It was one of those moments where you have to make a split second decision. She had to decide if she was going to go back for him or get onto the plane.” At the last second, she told Yuvi that she should get on the plane by herself and someone already onboard lied and said that he was Yuvi’s father and took her with him. One week after Yuvi arrived, both of her grandparents arrived in Israel.

“The first white people that I had ever seen were on the plane.” Yuvi told us. “And then when I arrived in Jerusalem, everyone was white. I thought that I was in heaven.” Yuvi thought to herself, “Maybe if I stay here long enough, my skin will turn white, also.” When Yuvi approached the immigration desk, she told them her name over and over. The woman on the other side of the desk simply couldn’t understand what Yuvi was saying. “Your name will be Rahel from now on.” Yuvi was impressed by her new Hebrew name and insisted that her entire family only call her Rahel.

However, at the age of nine, Yuvi realized that, not only did she look different from other Israelis, but she also sounded different – she didn’t have the Israeli accent. She stood in the bathroom, looking at her mouth in the mirror, perfecting the Israeli accent. At this point, Yuvi was attending a boarding school, but felt that it wasn’t Israeli enough. She made the choice to attend a High School on a Kibbutz to fix this problem. “When I graduated, I did what every Israeli does. I went to the army. I worked as a teacher. They asked me if I wanted to teach Ethiopian children and I didn’t want to because I saw myself as Israeli and didn’t connect with my Ethiopian identity,” Yuvi expressed.

After traveling and working in Camp Ramah of the Poconos, Yuvi returned to Israel looking for a job. When she didn’t get hired based on, what she thought to be, her “Ethiopian-ness,” she felt that she had to push her Israeli-ness to the forefront of her identity. She got a job, working as a teacher, living the typical Israeli life. But, after a while, her perspective changed. She left her job and started working for The Society for Protection of Nature in Israel with Ethiopian Youth. When she became a counselor, her boss informed her that they would be going on a hike and she needed to be informed about how to say a variety of “nature vocabulary” in Amharic, so that she could teach the kids. Eager to get the job done, she asked for a dictionary that had the words. Denied that request, she asked if there was a computer she could use to look the words up. Without a computer at hand, she was at a loss for ideas. She went back to her boss who told her, in a very straightforward manner, “Ask your parents.”

It was a concept that was unfamiliar to her. “My family was there, but they weren’t relevant to my life,” Yuvi reflected, ”I didn’t see them as a resource. But later, they brought me back to my Ethiopianism.” She started to learn so much about her rich culture from her family and developed amazing curriculum for the youth she was working with. After 7 years, she realized that she wanted to establish something a little more holistic — something that the whole family could learn from. She left her job and moved to Gedera, where she currently lives. At that point, Gedera was undesirable and she was looking for a deeper understanding of the problems that the community was facing. The municipality didn’t realize the potential of the community, weren’t providing enough resources, and were setting the bar too low. She saw something more for Gedera.

Yuvi started an NGO in the community, ran for and was elected to the Community Council and is working towards a better future every day.

“In order to walk from Ethiopia, you need to be strong and have faith,” Yuvi told us about her inspiration to make great social change for the Ethiopian community in Israel, “I knew that it was possible.” Since arriving in Gedera, Yuvi has created “Friends by Nature,” which focuses on bridging the gap between immigrant communities and Israeli society.

Don’t just trust me, hear it from Yuvi.