In this week’s Torah portion, we move from the exciting and relatable narrative in the books of Bereshit (Genesis) and Shmot (Exodus), into the legalistic and methodical book of Vayikra (Leviticus).

In the first Torah portion, God tells Moses how the Children of Israel should go about establishing a holy community, a “kingdom of priests.” In doing so, it offends the modern sensibilities of many of us, explaining in vivid detail how the newly freed Jewish people should serve God through animal sacrifices:

“And Aaron’s sons, the priests, shall offer the blood, dashing the blood against all sides of the altar.” Gross.

“The burnt offering shall be flayed and cut up into sections.” Ugh.

“The priest shall bring it to the altar, pinch off its head, and turn it into smoke on the altar; and its blood shall be drained out against the side of the altar.” I can’t even. Stop.

Lucky for me (and my wishy-washy vegetarian ideals), the Jewish practice of animal sacrifice stopped at the destruction of the Second Temple (70 CE). So if animal sacrifices are no longer a part of religious devotion, what relevancy does this Torah portion have for us today? By sifting through the blood and gore, I believe that this portion offers us an important message of physical action and living presently in the world.

First, it’s important to step out of our 21st century shoes and into the sandals of the wandering Israelite people. At this point of the biblical narrative, the Jewish people are beginning to learn what it means to be in a relationship with God. After successfully building the mishkan, the holy dwelling place, the people are eager to fulfill God’s will in becoming a holy community.

Animal sacrifices, which were quite common in the ancient near east, served as a means for communicating with God. The Hebrew word for sacrifice is קרבן which has the same root as the verb meaning “to draw near.” By instituting a sacrificial system, the Israelites were able to spiritually “draw near” and feel more present with the divine.

The portion opens up with the first sacrifice, the olah, the burnt offering:

“And he shall rest his hand on the head of the burnt-offering, and it shall be accepted for him…” (Vayikra 1:4)

In this verse, the Hebrew word “וְסָמַךְ” has a deeper meaning than simply to “rest his hand.” The Talmud suggests that this act involves “one’s whole strength.”

“Rami b. Hama said: …the laying on of hands must be done with all one’s strength; for if you suppose that one’s whole strength is not required, what [work] does one do by laying on the hands?” (Chagigah 16b)

Rambam elaborates on this further:

“The one leaning needs to press with all his strength…[there shall not be] anything interposing between his hands and the animal.” (Laws of the Acts of the Sacrifices, 3:13).

In other words, the act of religious sacrifice was a hands-on project, one that required intentioned physical action. Those who brought sacrifices were getting their hands dirty, investing their full selves in the process. 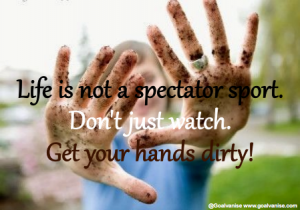 While religious rites have shifted away from animal sacrifices, the Jewish value of action and physical responsibility remains the same. Our tradition requires us to serve God through our actions, indicating that there is something about doing that brings us closer to the divine.

As the holiday of Pesach approaches, I’m reminded of this call to action. The physical preparation is just as important as the holiday itself, requiring us to use our two hands and our “whole strength” to establish a holy space and spiritual state-of-mind.

For me, this means cleaning my apartment from top-to-bottom, clearing out the clutter that accumulated over the year, and preparing my kitchen to be a bread-free zone. For others, this hands-on obligation might mean cooking a fun dish to bring to a friend’s seder, or perhaps collecting money to donate to others so that they might have a meaningful Passover celebration.

However one chooses to interpret this divine call to action, let us be reminded by this week’s Torah portion that actions speak louder than words, and by infusing our actions with intention, we have the opportunity to live more presently in the world.