Posted on March 22, 2013 by The Director of Digital Media 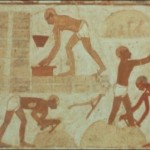 I often find myself questioning (shocker!) whether the stories in the Torah actually happened. Don’t you? I mean, it’s a really nice idea to think that thousands of years ago, maybe before humankind was as terribly corrupted as it is now, the miracles in the bible were true. They’re great stories. But if they really happened, where has God been for the last 3,000 years? Did he just get lazy or run out of ideas?

So, Passover is less than a week away, and in my attempt to gain some spiritual value from the holiday rather than mindlessly eating Hillel sandwiches for eight days, I have been thinking about the [hi]story. The story (note that that’s what we usually call it in English during the seder rather than the “history”) is a very important part of Passover; a large, usually boring part of the seder is the maggid, or “telling.” It attempts to explain why we observe the holiday and why we do the meshugena things we do (dipping our fingers in our wine glasses, opening the door for a ghost-prophet to drink our wine, drinking four glasses of wine in a very short amount of time…getting drunk so we don’t really taste the matzah…). So does it make our shtick any less fun or valuable if the story isn’t exactly true?

I subscribe to the academic theory that the “Hebrew” slaves were actually a bunch of nomadic tribes who came together and rose up in a religious revolution against the Egyptians’ idolatry and slavery. There is no archaeological evidence that there were ever specifically Hebrew slaves in Egypt. So if we weren’t really slaves, or if the slaves that were there were not only Hebrews, what’s the point?

I don’t care if it happened or how. The point to me is that there is a story, and it’s not just a Jewish story, but a human story. Even if we weren’t enslaved in Egypt, there were other times in recorded history that we have been, and not just us, but also our fellow human beings of other religions, races, and cultures. For me, the Passover story is a timeless metaphor for all peoples and all ages. There is always something enslaving us as humankind and as individuals. I’ll be the first to admit that I am my own Pharaoh.

This Passover, don’t get hung up on the details of the story. Use it however you need to. Change the characters up a bit. Reinvent it. It won’t matter whether it happened the way the Torah says it did thousands of years ago, if at all. Make it real.