Posted on April 10, 2013 by The Director of Digital Media 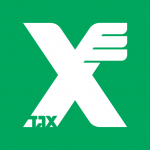