Previously, on Lost in Jerusalem, I made the grand pronouncement that I was setting for myself no less than three goals in an attempt to be healthier, happier, and perhaps something more of a writer than a poser who talks about how nice it would be if I were a writer. If you tuned into that episode, you’ll recall that I was going to read a book a week, run every other day, and publish a blog post by the end of said week, whether I had anything worth saying or not (and if I didn’t have anything worth saying, I’d make up for it by providing my hapless readers with a gripping book report on whatever novel I had decided to read that week). Well, it’s more than one week later, and I can report with certainty that I’ve already failed in all three of these lofty goals. If only my goals were to set goals and then abandon them at the first sign of an obstacle, I’d be in great shape. 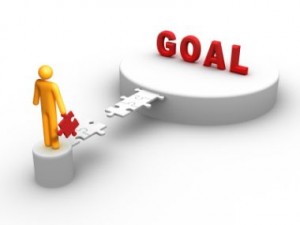 This helpful diagram depicts exactly what I do when attempting to accomplish something more difficult than clothing and feeding myself in the morning. Just put the freakin’ puzzle piece where it goes, idiot! It’s in your hand!

Now, to be fair to myself, I haven’t been a complete failure when it comes to actually achieving my goals–not yet. Indeed, I did finish F. Scott Fitzgerald’s This Side of Paradise in audiobook format on time, even though that wasn’t reading so much as listening to someone read it for me. Still, I experienced the story word for word from some very nicely voiced readers, all while doing mindless household chores, grocery shopping, or sitting on the city bus–In fact, I was so into it, that when Amory, the protagonist (who is clearly based on Fitzgerald as a young man) goes into a socialist tirade in the concluding chapter, I exclaimed to no one at all, “Oh, come on! F. you!” only to remind myself (also aloud, because I talk to myself, my books, my movies, and any inanimate object that I happen to interact with, on a far too-regular-to-be-normal basis), “Now, now, it was 1919 and he was a young, disillusioned man after the Great War, so let’s be fair…” Upon finishing the novel, I am happy to say that I am hungry for more Fitzgerald upon learning about how This Side of Paradise was semi-autobiographical, and that his charismatic debutante wife, Zelda, also wrote an apparently under-appreciated novel called Save Me the Waltz after living in his shadow during their intense and tumultuous marriage.

I also have been writing poetry. Clumsy, clunky, rusty poetry, but poetry none the less. I have even sent a few trusted confidants the drafts of those poems, and self-consciously shared a number of them at a salon that I participated in with some friends, and nobody pointed at me and laughed, and as far as I know, I’m still friends with the people who were present at the reading. My awkward lamentations about the complications of relationships, sex, and how my bizarre brain insists upon processing those things hasn’t made anyone turn suddenly and walk the other way when they see me coming down the halls of Pardes or the sidewalks of Jerusalem…at least, not yet. So far, so good.

As for running? Well, I had a few days where I was under the weather, then Jerusalem got confused and thought it was winter for about a week (and now it’s suddenly summer…like, Middle East summer), and I’ve been so stressed about finances, the Sword of Damocles that is my student loans hanging over my head, boys, and my inability to handle stress in the first place, that all of my life energy had been sucked into whatever deep abyss it disappears into whenever I attempt to work up the nerve to take care of myself. That energy is coming back, just now today. So, I’m going to publish this little update and go run around the Valley of the Cross for a while. No time like the present.

But before I go and try to get this show of life back on track and on the road, I guess what I’m trying to say is that even if I haven’t been keeping up as much as I’d like with my new reading/ writing/ running goals, I have been working at them, and with some success. I may feel inclined to get myself a custom made t-shirt that states “I Put the “Suck” in “Success,” and wear it on days when I don’t measure up to my own expectations, but maybe I should be a little easier on myself. 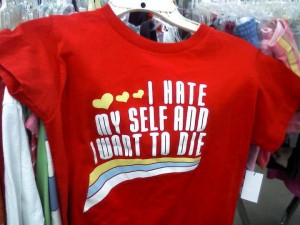 This is coming from someone who once ordered and publicly wore this exact shirt in my early college years. I am, unfortunately, 100% serious.

I am, after all, not doing so bad. I could do better, and as long as I realize that and take my own life seriously enough to realize that the alternative to not striving for better is the compounding sense of personal failure that drags me down all too often, well, then it’s quite an incentive to start reaching those goals and making new ones all the time to strive for something better.

There you go. A blog that isn’t a book report, my running shoes are on, and Philip Roth’s Portnoy’s Complaint awaits me when I get back from my run. See? This isn’t so hard after all!