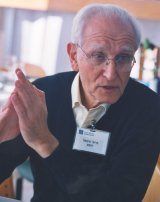 The loss of Mike Rosenak is of particular significance to the world of Jewish education, and certainly to Pardes. Mike was an early leader of Pardes and saw and promoted its promise. From my vantage point, he was interested in two large ideas. The first was the creation of two groups – the first was an educated laity who would incorporate the enthusiasm for Jewish living into the very fiber of their beings. He saw Jewish communal living as well as Jewish text study as vehicles for the creation of, as he put it, these “lively and alive” young Jews. The second group was a new core of Jewish educators who would have charisma and a sense of the Jewish journey that would be attractive to young Jews throughout the diaspora and in Israel. He was an eager supporter of the Pardes Beit Midrash and, as a consequence, he was an early supporter of the Pardes Educators Program (PEP). Mike urged us early on to make sure our program would not merely accomplish a checklist of the acquisition of important and needed skills, but we should constantly look to see whom we were producing. He wanted enthusiasm, the ability to respond quickly to new facts on the ground (i.e. the classroom) and to lead Jewishly as major traits to be found in our graduates.

And he wished that these graduates of Pardes and of PEP – and this was his other major concern – would embody an ongoing concern and grappling with great Jewish values, and not only the language and literature of Judaism that he so greatly loved. In the end, he told us it was crucial that chesed, shalom, cheshbon ha’nefesh be not only ideas, but become the ongoing instruments of Jewish creative life.

His advocacy was done with a quiet argument that was relentless in its logic, and irresistible in its charm. He was a great ironist who was able to see the other side and incorporate it as he argued and taught his side. He had no trouble, and indeed relished, argument and diversity of opinion; but he would not relinquish advocacy out of politeness. People were drawn to Mike Rosenak – his authenticity, his humor, and simply his goodness. Finally, he embodied all that he taught.