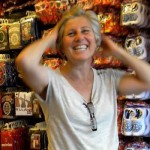 In Pirkei Avot (5:25) we find, “turn her, turn her, everything is in her” – הפוך בה, הפוך בה, הכל בה. We knew this theory before coming to Pardes, but feeling it on an almost daily basis for the last three weeks has been a whole different story. Perhaps there is no better place to see this in action, than in this week’s Torah.

This Parasha includes the words “ve’achalta vesavata uverachta” – “and you’ll eat, and you’ll be satisfied and you’ll bless” (Deuteronomy 8:10), which provides the foundation for Birkat Hamazon, and for many of us in Talmud with Zvi this often overly familiar blessing will never be the same. The immediate practical implications came in handy when some us went for falafel at lunch and were joined by a stranger just because he wanted to be part of zimun. If we doubted the messages and cross-class connections until the last minute, Tova-Leah last class about relationship used Birkat Hamazon as prime proof text for being present.

The parasha is part of Moshe’s farewell speech, and we examined his leadership with new eyes in Alex’s class. The opening words are, vehaya ekev, a difficult phrase to translate, but regardless of midrashim and Rashi, ekev – shares its root with Ya’akov, and in Chasidut we learned that Ya’akov, Jacob, is the story of every person; our need to journey away in order to grow and be able to return with greater understanding to the home base. And, because he is each one of us, his other name – Yisra’el doesn’t quite stick, unlike others who went through a name change: for example, once Abram is called Abraham, and Sarai – Sarah – their name never changes back, but Jacob, like us, constantly travels the stretch between earthly existence and the Divine aspirations. In the parasha our chavruta noticed it when, though we begin with ekev, later we read, “shma Yisra’el” and also “va’ata Yisra’el ma hashem elokeicha doresh me’imach”. By the way, as fitting to the Chasidut class, we opted not to punctuate this verse. After all, is it really “ve’ata Yisrael! Ma hashem…?” OR – “ve’ata Yisrael ma? Hashem…”

It turns out that Ekev holds another recent hero. Said Noam, said Lotem per Yafa’s Talmud class: Akiva is Jacob’s Aramaic name- with the alef at the end. In hachi nami (yes, this too), Akiva also was a shepherd and married a Rachel, who waited for him for a long time.

Akiva is also the one who enters the Pardes is peace and comes out in peace. I was wondering if one of the reasons for the tragic outcome of their journey is the fact that we read about “arab’a who entered a Pardes” – four, as in four separate individuals, rather than “one group”, or “chavruta”. In our own Pardes, we saw over these three weeks that chavruta may enter where no individual wants to find him/herself – alone, and emerge not only safely but supportive, and therefore stronger and smiling. Indeed, more than anything we were reminded over these weeks about the power of relationship: internally, with ourselves; horizontally, with others around us; vertically, with our past and future; and with G-d whom we sometimes called “Bigness” because at the end of all the words, we learned that we don’t know what we’re talking about… Like in the parasha, we too were introduced to a new Land, which God inquires (doresh) of always, demonstrating a relationship not only with people but with the location and space around us. Personally I was especially honored to learn Torah with two of my children, which is kind of like being in Sinai. Then again, Sinai is in the parasha too.

May we all have a Shabbat Shalom and may we meet again somewhere on the derech.