Behind the Scenes: Q&A With Two Inspirational Pardes Students

Posted on August 7, 2013 by The Director of Digital Media

Earlier this year, a group of students from the Pardes Institute of Jewish Studies got together to make a video to tell the world what Pardes is all about. We sat in the Pardes beit midrash (study hall) in Jerusalem and interviewed two students who starred in the video to hear what brought them to Pardes and what they got out of their year. 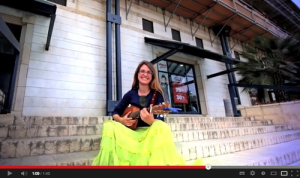 How did you choose Pardes?

I was an English major in college, and in my sophomore year I took a course called “Bible and Literature.” It changed the entire way that I related to Judaism. Suddenly I realized that the text I was reading in synagogue or in Hebrew school was a really deep literary tool that I could use. I was fascinated by it, and disturbed by the impact it has had. So I started delving deeper into these texts. Eventually I went to speak to the rabbi at the Reconstructionist synagogue in New York, which my family attends. I told him that I was going through a really difficult faith conundrum, and he said that he thought I would benefit, after graduating, from going to Israel and actually devoting some time to these questions. He had heard of Pardes, and told me to check it out. I found out that I got in and thought ‘why not?’.

What kind of Judaism did you practice growing up?

We had a strong grounding in tradition — Reconstructionism does that well. But my family only joined the synagogue for my bat mitzvah. My dad is a musician on Broadway, so Shabbat was never much of a thing for us — we lit candles and then he went off to work. Ritual observance didn’t really exist for my family. But we did gather together as a family to celebrate holidays.

My family has a difficult story, but it’s something that I’m very proud of. My grandfather on my mom’s side is a Holocaust survivor. He went through seven concentration camps, came to America, married my grandmother, a Protestant Southern belle, converted to Christianity and became a Christian minister. Many years later, in a full circle, he came back to Judaism. Now he is a theologian and Jewish scholar, and teaches in Northern Carolina. This was something I always knew and really respected my granddad for.

I grew up seeing Judaism as a scholarly pursuit, without a real sense of knowing what I was talking about when I talked about it. In college I became much more involved through Hillel. In my year abroad in Edinburgh, Scotland, I realized that I wanted a Jewish community while I was there. I found a tiny little Jewish community, and realized how much was at stake because they were so tiny. So my involvement in Judaism grew more, more and more as I got older.

I came here because I want to be a leader in my community, and I want to go on to pursue this as an intellectual endeavor as well.

How has studying here changed your Jewish identity and practice?

It has been an incredible year — at first quite an emotional rollercoaster. I’ve never felt more distanced from everything that I knew before. I’m curious to see what I do when I get home, especially in how I explain changes in my practice to my family. I’ve been exposed to a Jewish community that I just never had — people my age who are really passionate about this.

That’s why I came here — to be able to talk about these things. I’ve grown so much, gained some really great friends, and been immersed in a life of ritual that I find very beautiful and challenging. I’m excited to have been given these tools so I can keep playing around and experimenting. I now know the kinds of questions I want to ask myself and other people, and the texts I can turn to. And I can now read them in the original Hebrew, with some help!

What was it like coming to Israel for the first time?

People told me that I was extremely brave to come here. But I think that you don’t get a sense of what a place is about without living there for an extended period of time. A lot of it has been painful for me, and I’ve done a lot of political questioning.

I also fell in love with the Hebrew language. I love ulpan and the thing I’m going to miss the most is the ability to practice my Hebrew. I don’t know how I’m going to keep doing that in New York!

I joined an amateur orchestra while I was here. It’s a complete cross section of Jerusalem society — kids, older people, religious people and secular people. It was a really good way to be involved in the community while being here, and their love of music is inspiring.

I’m really grateful to Masa for helping me come here. I’ve had a tremendous experience and I would simply not have been able to come without the financial aid.

Read more from Gabby on the Pardes blog 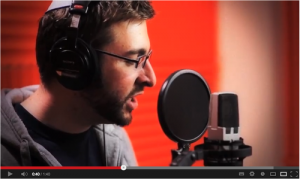 What did you think of the video?

I think it captures the magic of Pardes in a very real way, especially the line that the writer of the script, Andrew Lustig, wrote — “they told us this wasn’t cool.” I remember growing up always feeling that I was a little weird for loving this stuff a little too much, for being the kid in religious school who actually wanted to be there.

What brought you to Pardes?

A few years ago I was working as a bartender. I thought I was really happy in my job. I ended up going on a Birthright trip because I had a few weeks free in the summer — it had been 13 years since I had last been to Israel. When I got back to the States I realized that I wasn’t happy at all. I was just desperate to be back in Israel. So I spoke to my father about it, and he told me that if I applied through Masa I could get funding, leave my job and go to Israel for a year to study. I was looking through the list of Masa—approved programs, and Pardes jumped out at me as a place where I could learn with people and be inside of a very welcoming community. It was absolutely the right choice.

How has being here helped you grow Jewishly?

I grew up in Reform and Reconstructionist congregations (my father is an ordained Reconstructionist rabbi), and before Pardes I hadn’t ever spent any serious time with other types of Jews. I didn’t understand the breadth and width of the tradition, and I didn’t quite comprehend what was happening across the denominational board. Pardes has not only expanded my circle of friends — I can now say have friends from across the Jewish spectrum — it has also increased my knowledge of what’s going on within Judaism, and vastly improved my knowledge of Jewish texts and contemporary Jewish issues. I really credit Pardes for vastly expanding my horizons and opening me up to the wider Jewish world.

Before coming to Pardes I had never been in Israel for more than a month. I love it — it’s difficult sometimes, I struggle with Hebrew, but I’m working on it.

When I hear people speaking loudly and in English with a New York accent, I feel very Israeli, and when I’m at the bank or a restaurant, I often feel very American. I feel Israeli at the shuk. I feel very Israeli when I can understand a good proportion of a talk in Hebrew. Those are my key moments when I catch on to what I’m saying, and then I lose it, but for a brief moment I really got it.

You’re going to the Reform rabbinical school in Jerusalem next year. Is that something that came out of being at Pardes?

Read more from Sam on the Pardes blog