The Value of a “Safe Space” Sticker 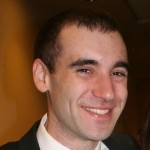 Living in a new place surrounded by new people has given me a new appreciation of how great it is to move past the “coming out” stage with Jewish communities. Coming out with subtlety, in individual conversations, is exhausting, and when I’m around large groups of people who don’t know I’m gay I try to simplify the process pretty regularly. I recently found myself in what I believed was an “unsafe” space to come out, risked coming out anyway, and only after doing so realized that my assumptions were wrong.

It takes time to get to know a community’s standards and practices and to find the true “safe spaces.” But something I took for granted in the liberal enclaves in which I’ve found myself are literal labels on safe spaces — stickers on teachers’ offices, classrooms, and Hillel offices indicating that one can identify oneself as LGBT there and be met with support. At this time where changes are happening so rapidly in the observant Jewish community regarding LGBT individuals, I now see the value of labeling those spaces where one knows one can be out and proud.

On a recent Shabbat, I had a picnic with some people from my ulpan. Without going into details, the situation arose where jokes were made about an LGBT synagogue, Rabbi Joel Roth was spoken of in a favorable light regarding his teshuva against ordaining gay and lesbian rabbis, and fatherly, but critical, advice was offered to two of my friends about their professional futures.

I’m not sure why I was so bothered by the gay jokes. Perhaps it was the unspoken idea, maybe not even present, that gay Jews are somehow unusual — or that a “gay synagogue” is inherently less worthy of respect than any other group that chooses to establish a kehillah. But that coupled with the references to Roth led me to believe that I might not be in a safe space. “I have an obligation to identify myself and clarify why this conversation is making me uncomfortable,” I thought, “but if I do, I could have to spend the next hour being criticized for my identity, and I don’t have the energy to have that argument right now. And now I can’t breathe.”

Some incomplete information led to my incorrect assessment of the situation. I’m embarrassed to admit that at this point I hadn’t done enough research about what Roth actually said about gay Jews. From what I’ve been able to gather, his position is not nearly as inflammatory as I’d thought, and he seems like someone with whom I could have a valuable conversation. I would tell him, “it seems intellectually dishonest for you to encourage gay people to be a part of observant Jewish communities,” but there doesn’t seem to be any element of truth to this personal vendetta against the LGBT community for which he kind of seems to be known. But anyway, during lunch I was under the impression that “supporter of Rabbi Joel Roth” meant “likely to prefer that anyone who is gay remain closeted right now.”

The more ambiguous aspect of the conversation, however, was the gay jokes. When it comes to the observant Jewish community, in the absence of a “safe space” label, one doesn’t know if they’re mean-spirited or not. One doesn’t know if one’s host is “fine” with gay people but expects them to stay in the closet (which is to say, “not fine”), or if one is going to be the first out-gay-observant Jew one’s host ever meets. The truth is, while I know people who have encountered all of these situations, I have yet to personally be present in an “unsafe” Jewish space, and so an area of teshuva for me is to stop assuming the worst about gay-positivity and to focus on articulating concrete areas for improvement, like stopping with the gay jokes and calling allies to lead in that way. Because as it turned out, actually speaking the words “I’m gay” at lunch did not provoke any sort of a reaction.

I soon have to make a decision about where to daven on Rosh Hashana and Yom Kippur in Jerusalem. Anywhere with a mechitza is probably out — too distracting on already difficult days. But additionally, on Yom Kippur afternoon during the reading of the holiness code (which prohibits same-sex sexual relations), I want to be in a place that acknowledges the complexity of this tradition.

From my time at Penn, I have high expectations, as the gabbais in our Orthodox community organized an act of compassion so subtle that I absolutely would not have noticed it if I’d been new to the community. As I’ve previously mentioned, the out-gay-observant Jews at Penn all have come out pretty publicly. Everyone in shul at Yom Kippur mincha who’d been around for longer than a few months knew who we were, so it definitely sent a message when we were given honors in the Torah service and when one of us gave a dvar Torah. I did not interpret these decisions as a gesture of defiance toward halacha; rather, they seemed a gesture of humility. They demonstrated that our community still has questions about the intent of this tradition that speaks of gay sex in the same category as incest, adultery, and bestiality — at the most terrifying and awe-some time of the year.

So, if this is the way that a community thinks, how do they show it to visitors? We were in no way identified as “gay” that day, plenty of straight people were participating in services as well, and nobody spent time talking about what the holiness code means. Rabbi Steven Greenberg has published a supplemental prayer to be used with this Torah reading, and it’s great — but it’s not a stylistic fit for a service with no other supplemental readings and it’s not in the machzor.

I am blessed to know who to ask about community standards and practices for this year. But moving forward, for communities and individual homes that want to indicate they also don’t have it all figured out, I’m interested in a standardized solution. A logo or sticker, placed on a program or a wall (or a doorpost?), could work.