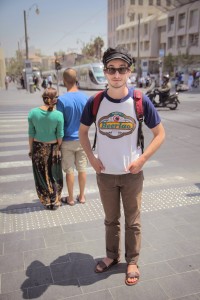 I want to be a creator.  To do my own stuff.  Write songs, write music.  Ever since I was like fifteen years old I wanted to do this.  I started listening to music that influenced to me in a different way, a more powerful way than before.  Before, okay, music was something.  In the car there was music, but then I started to look for solutions and meaning, and music which I felt helped me grow up and educate myself.  Because I also was looking for role models, which I did not find in my parents, with all due respect.  The very first one I liked was Aviv Geffen.  Now, I don’t like him.  He’s gone on TV and ta ta ta… Then I really liked Pink Floyd and Led Zeppelin and Bob Dylan, of course, and, you know, the good ones.  With the good lyrics.

I am from Mazkeret Batya.  Near Rehovot.  I am 24 years old.  I came to Jerusalem two years ago to study, to study music. Not exactly right after the army.  I spent a year up north.  I worked at a hotel, and then I came here to Jerusalem.  I came to Jerusalem mostly for the school. There’s a school here for arts.  I mostly study experimental music, noise, electronic music, all sorts of music, but that’s the direction that the school points you at.  Some music for films.  My girlfriend studies in a different school here, the visual theater school, and she did a twelve minute film, and I did the music for that.  We are only seven students in my class.  There’s a place called HaCasseta.  I’m playing with my flatmate on the 24th of August.  It’s not going to be so much.  Just loud.  Two guitars.

There’s a big school here in Jerusalem, a music academy, and lots of classical musicians come study, but most of the industry, or what you call “the industry,” is in Tel Aviv.  That’s probably where we will go.  I would like to stay in Jerusalem, but it’s, like, small…

I like it here.  I always like the atmosphere in Jerusalem.  And the air, the weather.  I also like the diversity.  I find it interesting, I suppose.  And a lot of people live how they believe they should live, all the way.  And I think that’s strong.  Of course, I have my problems with some of the fundamentalists, etc., who do it aggressively, like right outside my door, they’re screaming “Shabbas, Shabbas!” but… I suppose I accept it as part of life.  I try to do my own thing.

I can see myself living in Jerusalem for a long time.  But one thing I would change… if I could change the tickets for the Rakevet HaKalah (The Light Rail)…  make them go faster!