Posted on October 15, 2013 by The Director of Digital Media

You can’t really know me at this point and not know that I spent a summer in Uganda working for the American Jewish World Service or AJWS. If that’s the case, we should talk some more! AJWS is a non-profit organization supported mostly by American Jewry that works to realize human rights and end poverty in the developing world. AJWS works by partnering with NGOs on the ground to achieve their goals. They do this because the NGOs are familiar with the people of the community as well as the needs of the community and they feel that this is the best way to make sustainable change. They partner with about 350 NGOs in 32 countries. They give educational and financial support to the organizations and the year that I did volunteer summer, AJWS sent volunteers to four of the organizations. [Unfortunately, Volunteer Summer no longer exists. But, fortunately, AJWS is still doing amazing work!]

Along with 14 others, I went to a small village called Ramogi Village in Southeast Uganda and Partnered with an NGO called Uganda Orphans Rural Development Program. The goal of the NGO was to support the orphans in the community by providing lunch before school, providing health care, working closely with the schools to provide extra help for students, education on parenting techniques and general support in the community. In Uganda, you are defined as an orphan if you lost one or both parents. 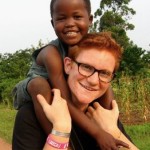 While there, our group lived on a compound in the middle of the village with some of the employees of UORDP. The CEO of UORDP is named Jaramogi Apollo. Apollo’s four-year-old niece, Jane, used to live with him, but a little while before we arrived, she went to live with another Uncle.  We called her Jen. Maybe it was because she was intrigued or maybe because she liked the familiarity, but she always found her way back to the compound after school. I love kids and she was the most adorable little girl, so, naturally, we spent a lot of time together. She spoke about four words of English and I spoke about four words of Dhopadola, the language of Ramogi Village and some surrounding areas, so our verbal communication was limited, but it didn’t limit our relationship very much.  Every day when we would return from the worksite, it wasn’t long before Jen showed up. We would all be sitting in the common room eating lunch and, sure enough, Jen would come walking in looking for some food. I would give Jen baths, made sure that she always drank her tea and ate her bread before school, played with her, danced with her, went on walks with her. Basically all of the free time that I had was spent with Jen. 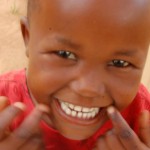 After asking around a little bit, I found out Jen’s father had contracted HIV from an extramarital affair and lied to his wife about his illness. Due to the stigma around HIV in Uganda, he also refused to seek treatment and medications. By the time Jen’s mother found out that he was sick, she was already infected. When Jen was very young, her father died, leaving Jen’s mother with 3 children and HIV. I met Jen’s mother once, after I begged Apollo to have her come visit. She was very weak and sick, unable to care for herself, let alone her children. As a result, she was living with her Aunt and Uncle. However, her Uncle was very abusive to his wife and his children. Although he never abused Jen physically, it was an emotional roller coaster to live in their house and it made a little more sense why Jen was always hanging around the compound.

Even though I understood what our relationship meant, I felt like it wasn’t fair to Jen, especially because she wouldn’t be able to understand it when I left. One Saturday evening, she had fallen asleep in my bed while I was eating dinner. Before Shabbat ended, and it was very dark, I wanted to wake her up and take her to her family’s house where she was staying because I felt that letting her stay the night would be pushing the boundaries too much. I woke her up and motioned to her that we were going outside. We left the compound and started walking on the road to her family’s house. When we got there, Jen put two and two together and realized what was happening. She immediately began to cry.  She grabbed onto my legs and refused to let go. Someone came out of the house and said, “It’s okay, I’ll take her.” Who I later found out was Jen’s cousin began talking to Jen in dhopadhola, saying something, I’d assume, along the lines of, it’s time to go, you have to stay here, you can’t go back with her.

However, the older girl’s tone was not one of compassion or care, but instead one of frustration and annoyance. My heart couldn’t take it. How could I allow Jen to go into that house with the girl when clearly, I knew what was best. I picked Jen up and started running back to the compound. Both of us were crying. At that moment, I didn’t know what else to do.

This week’s parsha is Vayera. In it, Hashem informs Abraham of his decision to destroy Sodom and Gemorrah. The text of Bereshit Chapter 18: 23-33 is below from Chabadworld.net.

To me, it seems like Abraham is trying to find the tipping point. How much good has to exist in order for the bad to be cancelled out? There has to be some sort of balance established and Abraham was pushing G-d’s limits to see what the balance was. When is the good good enough? This question comes into play constantly in my life. Does a little white lie fix enough of the problem to outweigh the fact that I lied in the first place? Is it okay to send computers to villages in Uganda because we feel like people need them when a computer uses more electricity than the entire village has? Is it okay to send thousands of Zephyrhills bottles to a city with no access to drinking water only for the community to be in the same position as they used to be in when the bottles run out? Was it okay for me to take Jen from the stability of her house because I thought it was better for her?

Now that I’ve taken a step back, I’m able to consider the options that I was presented with that night. Would it be better for Jen to stay with her Uncle, in a consistent yet, negative environment than it would have been to stay in a variable, safe place with me?

What was the right thing for me to do? How do we know when we’re doing something that is actually right versus something that we have just told ourselves is right? When Jen woke up the next morning, I decided it was time to have a real talk with her. I got someone to translate and slowly explained to Jen who I was. That I lived in a place far away and that I was only going to be in Uganda for a short amount of time. I tried to tell her that she couldn’t stay with me anymore. I tried to tell her that it was best that she stay with her family. Was I trying to make her feel better or was I trying to make myself feel better? Was I contributing to wrong doing or working against it?

Abraham challenges God. He advocates for the people of the cities and for G-d’s own moral standing as a G-d of justice. He is not questioning the existence of G-d’s justice, but instead its extent and limitations. How much good has to exist to make it worthwhile not to destroy the towns? Even though the wrong doings of Sodom and Gomorrah were so terrible, ten righteous people could have saved the towns and the people therein. In this parsha, we learn the concept of merit. We learn that a little merit, the quality of being particularly good or worthy, in a sea of evil, could have prevented the destruction.

The sea of evil that faces people today covers the vast expanses of the Earth and it is sin both great and small. Certainly injustice, poverty, hunger, and malnutrition are not sins of the affected populations, and no nation or people is without them; rather, the sin is upon those who allow them to occur. In an effort to right those wrongs, we need to make sure that we are evaluating the best ways to make sure that wrong doing does not exceed the limits of justice. We need to make sure our actions don’t cause more harm than good.

Abraham spoke on behalf of all of the people of Sodom and Gemorrah when he questioned G-d’s justice and I challenge you to do the same. I may not have done the best thing by taking Jen home that night. However, now when I make an attempt to do good, I force myself to consider the consequences. I ask myself the questions that I didn’t answer when I stood between Jen and her cousin. Is what I’m choosing to do the most sustainable option? Is the decision I’ve made going to bring about the most good or am I causing more harm? No doubt, we all have the power to enact great change, but we must question justice now so that generations to come can follow our lead.

It is through our own advocacy — when we raise our voices and use our own political power to demand righteousness and justice — that we demonstrate that we are indeed the children of Abraham, keeping the ways of G-d.