The Day my Little Brother Moved to Israel

The Day my Little Brother Moved to Israel 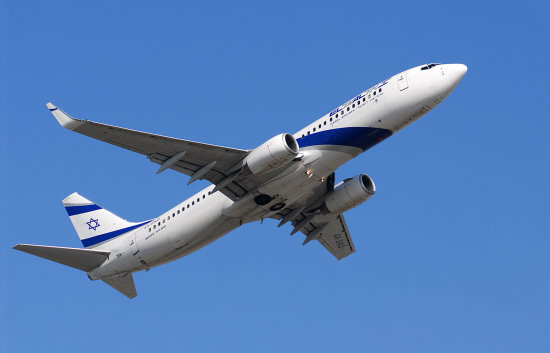 Since then, I have been asked a certain two questions more times than I can count:

In response to the first question, I can probably give you an educated guess because I know my parents very well and I talk to them on a regular basis. However, if you want the facts, give Barbara and Jonathan a ring.

In response to the second question, I would prefer it if you did not call my parents; their phone will be busy enough with the first question and they will probably give you the same answer that I will, so there’s really no point in making the extra call. And what is that answer that we will both give? A resounding I DON’T KNOW.

Here’s the why:
Currently, I am studying at Pardes.
When I am finished, I will probably be a transformed person (Pardes has the tendency to do that) and I will get back to you on my choice of country. But I must warn you that I might not even have a decision then, so you’re better off waiting for the morning newspaper because at least that will definitely arrive (albeit late).

But enough about me. I have to talk about my little brother for a bit, because this is his story, after all. Now, I really can’t claim to know all his reasons for making aliyah. I know there’s something about a laid-back Israeli culture, a pressurized, anxiety-producing American culture, a desire to learn Torah, and an intense connection to the land that all of our ancestors have called holy. But those are just mere factors. To get the real story, contact Uri Bilmes, the Food and Beverages Professional himself.

(Hm. I am realizing as I write this that truthfully telling someone else’s story is very difficult. So far I have outsourced the narrative to three other people, which probably shows that my research is shoddy and that I really should have spent more time gleaning facts and feelings before I began to write. Oh well, now that I’m in it, I might as well keep going.)

I’ll begin with Tuesday morning, October 8, 2013. My alarm was set for 6 am, so naturally, I woke up at 5:47. Eli and I had arranged to catch a 6:55 bus from the Jerusalem Central Bus Station to Ben Gurion Airport, and I had budgeted just enough time to get there. I got on the 4aleph at 6:15, and realized, sadly, at 6:45, that I was in Mea Shearim and that this bus was not going to the Central Bus Station.

I got off and started running in the direction of the CBS. I waved my hand out for a taxi, and

This doesn’t apply to Jerusalem.
But it’s still funny.

hoped that we could make it in the eight minutes before my bus left. We did. Thoroughly thrilled with the ingenuity with which I had solved a problem that I myself had created by not checking the bus routes, I relaxed into my seat, dreaming of the excitement that would await me at the airport.

In Mevaseret Tzion, Eli got on the bus. We rode happily together, he with his coffee and me with my rolled-up “Welcome Uri!!” poster that I had made the night before. Close to the airport, we transferred to an airport shuttle bus, riding it all the way to Terminal 3 (in Hebrew: terminal shalosh טרמינל שלש). We confidently walked in and rode down the escalator to the Arrivals area. I looked at my watch: eight o’clock.

Perfect timing! I thought. Uri’s flight landed around 7:30, so it will take an hour or so for him to get his bags and his paperwork. When he comes out, Eli and I will be right here waiting for him!

Eli and I both davened shacharit. We ate breakfast. I bought a newspaper. Around 10:30, a crowd of people began to gather around the entrance. Not wanting to miss a thing, Eli and I joined them, hoping to find Uri’s Israeli friends whom he said would be waiting for him. The task was easy: they were holding signs that said אורי on them. And so began the schmoozing!

You’re Uri’s siblings? Are you excited? What are you doing in Israel? When are you making aliyah? They spoke rapid Hebrew (and a little bit of English) but I managed to keep up and happily answer all their questions. Soon it was 11:00. Then 11:30. It seemed that the more we talked about Uri, the less likely he was to show up. 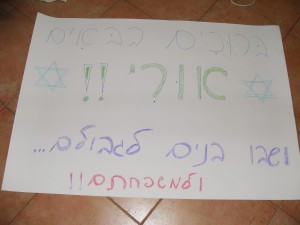 The sign that I made to welcome Uri at the airport!

Finally, a representative from Nefesh B’nefesh (the aliyah organization) stood before us and announced that the first of two groups of olim was about to come out. He read a list of last names. “Bilmes” was not heard. I sighed and retired to a seat to read my newspaper.

Out came the newcomers. People sang and clapped and hugged, and I was engrossed in an article whose content I cannot rightly tell you. People milled around, basking in the presence of their loved ones and slowly wheeling those huge luggage carts out to the taxis. I continued to read.

All of a sudden, I heard a shout go up. I looked toward the sliding double doors and saw a young man walking out with one fist raised, as if he had won something. He was pushing his cart with the other hand, and before the cheerers enveloped his form, I recognized the face of my little brother.

I shot up from my seat, stuffing the newspaper back into my bag, and sprinted towards Uri, thinking, I’ve been here for four hours and I’m not even paying attention when he walks in?! By the time I got to him, he was being accosted by Israeli male hugs, so I pulled on his backpack, yelling, “Uri! Uri!” Finally, one of the guys said, “Uri, your sister!” and Uri turned around and gave me the hug and the smile that I had been waiting for.

Someone hoisted Uri up on their shoulders, and the guys formed a circle around him and danced and sang. Us girls clapped on the side. Now, I normally have great respect for gender separation here in Israel, but seriously, he’s MY brother!! I wanted to shout. Let me dance with him! After the initial excitement subsided, we made Uri show us his teudat zehut תעודת זהות (Israeli ID card). Then we gathered around him in a small huddle and he shared some words of Torah (classic Uri move). Then his friends slowly departed and it was just us three: siblings united at last. 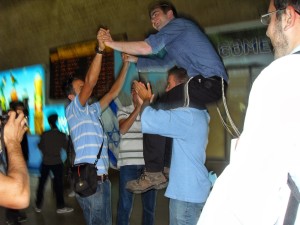 Our next task was to figure out how to obtain the legendary free taxi ride that one receives when he or she makes aliyah. Seriously. A FREE ride. Too bad none of the drivers knew what we were talking about. We were told to go to the second floor (where there is no street entrance), then the third floor (where there are no taxis) then back to the first floor, where we eventually got a cab. After five hours, I finally left the airport. Oh, right, and Uri was pretty happy to get out of there, too.

Me and my brothers climbed into the back seat of the van and enjoyed our crazy Israeli taxi ride together. The hills, the sun, the swerving driver…all made better by the presence of my brothers. At one point, I looked over at them and said, “Hey guys, we’re all in the same car! When was the last time this happened?” We didn’t know.

The taxi was headed to Ma’alei Adumim (where Uri’s yeshiva is), but I was mercifully dropped off outside of Jerusalem, whereupon I hopped two more buses and finally made it home around 3:30. I was happy to let Eli handle things from there; I was sure the two boys could use some “brother time,” and girls aren’t allowed into all-boys yeshivas, anyway.

Although exhausted physically, emotionally, and linguistically (I had spoken a lot of Hebrew that day), I headed over to Pardes for the last hour of class. Concentration wasn’t really an option, but I just wanted to be in a place where I felt safe and comfortable and knew what to expect. No more public transportation. No more periods of interminable waiting. Just Hebrew books and a calming beit midrash.

I went to bed at 8:30 that night, having spoken to no one about the events my day – or, rather, Uri’s day. Because, the truth is, that I did not (and still don’t) know what I was feeling, other than exhaustion. There were moments when I was caught up in the jubilation of others, moments when all I wanted to do was stop waiting, moments when I marveled at the conviction of both my brothers to continue their lives in a new country. And so many moments when I felt the power of I don’t know.

Half of my immediate family now resides in Israel. The other half lives in America. I will spend the rest of my life choosing whom to be closer to. It is not an easy choice. I jokingly told a friend that I should move to Australia and just avoid the whole thing. But then all I would have are koalas and kangaroos.

So there are no resolutions yet – only thoughts. All I can say is that I consistently thank God that I have a family that I want to be close to. May everyone have the problem of having so many people to love. 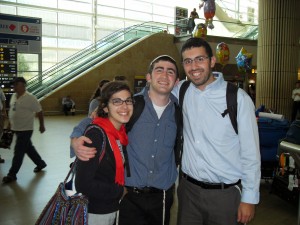 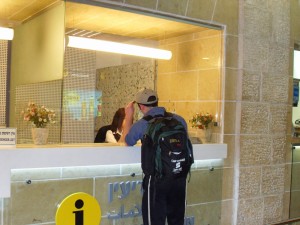 Uri trying to get his FREE cab ride 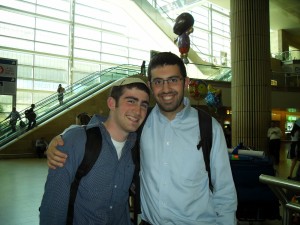 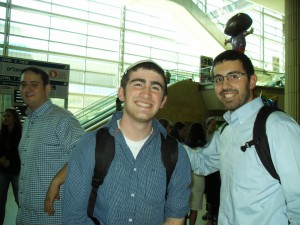 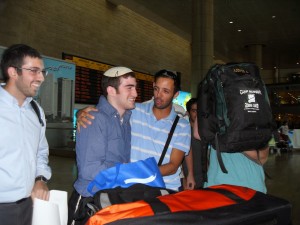 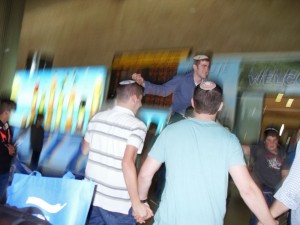