[PCJE Dvar Torah] What Would Avraham Say About the Pew Survey? 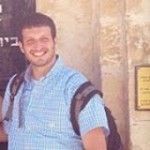 Yes, that Avraham. The Jewish world has been afire in recent weeks with responses to the new Pew survey on American Jewish life which shows an increasing rate of secularism, intermarriage and the like within the Jewish community. In one of the more inflammatory responses, Gabriel Roth of Slate.com advises American Jews to “embrace your secular, intermarried selves.” What would our first patriarch have to say?

Hayyei Sarah paints for us a new picture of Avraham; a man advanced in years, approaching his death and beginning to look towards the future of his line. While Avraham has been blessed in many areas, there is one clear problem; his son Yitzchak, who is supposed to carry on the family legacy, remains unmarried. Avraham calls his servant near to him and adjures him to swear an oath, using an unusual oath gesture that we only see physically repeated one other time in the Torah:

There are two plausible meanings of this oath gesture: it seems to either relate to circumcision or to progeny; in Torah language, “those who come out of the thigh.” Rashi assumed this to be a reference to circumcision, a sensible interpretation given the apparent connection of this gesture to the circumcision covenant sworn a few chapters earlier. Interestingly, however, Avraham refers not back to the circumcision covenant when giving this oath, but rather to the covenant sworn two chapters earlier in the בתריםברית בין ה, “the oath between the parts.” In asking his servant to swear to find a wife for Yitzchak, Avraham reassures the servant, telling him:

This seems to be a clear reference back to the בתריםברית בין ה in Chapter 15, which says:

Upon closer look, Avraham’s rationale for invoking the הבתרים” ברית בין” when asking his servant to find a wife for Yitzchak becomes clear. At the time of this covenant, Avram was childless. God tells Avram that he shall receive an exceedingly great reward, to which Avram replies:

God responds by taking Avram outside and asking him to count the stars, assuring Avram that his descendants will be as numerous as the stars in the sky.

Nearing death and fearing that Yitzchak will never get married, Avraham gets worried. He summons his servant, who is Midrashically understood to be the same servant Eliezer mentioned in Chapter 15, and has him swear to find a wife for Yitzchak, thus continuing Avraham’s covenant and lineage. As God promised Avraham that his heir “יֵצֵא מִמֵּעֶיךָ”- “Will come out from your loins”, Avraham has his servant swear by this same organ that he will do his part to continue the covenant.

It is clear that this oath gesture is not as random or mysterious as it initially appears. We know from archaeological evidence that an identical oath gesture was used in Ancient Mesopotamia, which is assumed to have been used to invoke the oath giver’s family spirits to ensure that the oath-taker lived up to his promise. Additionally the one repetition of this oath in the Torah, later on in the book of Bereishit, also concerns the maintenance and purity of the family. In the later instance we see an elderly Yaakov, recognizing that his death is approaching, make his son Yosef swear to bury him with his fathers. Avraham, similarly nearing death and unable to physically hold his servant accountable, seems to invoke the spirits of his progeny, those descendants promised to him by God, to compel his servant to follow through with this oath.

While Avraham’s oath gesture might reflect a common practice in the Ancient Near East, there is a clear adaptation- the invocation of God in this oath. Unlike the parallel oath gesture in the Ancient Near East, in which the gesture itself was seen as sufficient to compel the swearer to follow through, we see Avraham add in a second powerful piece to this oath. He has his servant swear “בַּיהוָה אֱלֹהֵי הַשָּׁמַיִם, וֵאלֹהֵי הָאָרֶץ”-“By God, God of the heavens and God of the earth.” By using both a physical oath gesture understood in the Near East to invoke progeny as well as an invocation of his new familial deity, Avraham creates a doubly powerful oath which would seem to ensure that the swearer would feel compelled to follow through with his promise.

Strangely, this seemingly powerful oath disappears after Bereishit. It would seem that an oath with a perfect success rate would be adopted by the nation, but we never see Moshe, or anybody after Moshe, use this same formula. I believe that the reason for this change is alluded to in the “Burning Bush” story of Shmot. In introducing Godself to Moshe, God declares to Moshe, “I am the God of your father: the God of Avraham, the God of Yitzchak, and the God of Yaakov.” In becoming the father of the Israelite nation, Avraham was becoming the father of two separate entities: a religion and a lineage. By the time of Moshe, however, these two separate entities have merged into one. It was no longer possible to separate the religion from the lineage; in swearing by God, a person was implicitly swearing by the ancestors who established and maintained a covenant with God.

So does the religious legacy of Avraham Avinu contain, in the words of Slate.com’s Gabriel Roth, “Terrible ideas about racial purity?” Sure. Is it, “tribal?” Absolutely. Would our first forefather, whose final wish before he died regarded the continuation of not only his line but his also his religious tradition, take Roth’s advise and embrace our “secular, intermarried selves?” I’ll let you answer that question for yourself.