I’ve been suffering for some years now from a self prescribed disease known as “Shtetl Nostalgia.” Perhaps unique to 4th generation Ashkenazi Jewish Americans of the Galician frontier, it mainly consists of an intense longing for a time and a place that I never knew and that wasn’t nearly anything like I imagine. Yet I’m not sure I care that there seem to be all those places that history and stories diverge.

I can tell you some facts. I can tell you that Mayer Jacob Hecht was the first to make the trek, my great-great grandfather on my mother’s mother’s father’s side. He arrived in the early 1880s on the far side of pogroms. He made his way to St. Louis, had ten children, and died in 1925.

Or I can tell you about David Nagelberg, who was born in the small Shtetl of Rohatyn in the late 1880s, a town that was Austrian, and then Polish, and then Soviet, and today Ukrainian. Orphaned in his teens, he escaped Galicia in 1902 and slowly made his way to Manhattan’s Lower East Side. He married, had a daughter (my maternal grandmother), and moved to Cleveland, where he died in the 1970s.

The facts of their lives are important. But it doesn’t convey the stoic, observant nature of Mayer Jacob’s life. Facts would struggle to tell you that David Nagelberg never fasted on Yom Kippur because he had missed enough meals in his younger years. The facts of their lives are what I researched in archives and at cemeteries. The stories that I carry with me were told by someone I love about someone who they loved.

What is the story I have to tell? I could start it with the facts, that I graduated college in the spring of 2009, that I attended the University of Michigan where I studied Public Policy. I could tell you that I left for Ukraine as a Peace Corps Volunteer in March, 2010, and that my service ended in June, 2012. And I could add up the years and the days and give you a list of the places I saw but frankly that sounds boring and doesn’t really count for squat. 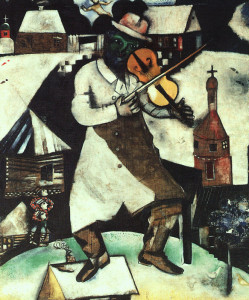 The Fiddler by Marc Chagall

My father once asked his grandfather David about the Shtetl. He had just seen Fiddler on the Roof on Broadway, and wanted to know if Rohatyn was anything like Anatevke, the famed home of Sholom Aleichem’s beloved Tevye. David’s reply? Sholom Aleichem had a wonderful imagination.

So here it will come, I suppose, part past, part present, a bit of myself poured in to this Shtetl that time forgot but that I never will. For beyond these words and over the hills and valleys and fields of Ukraine, there lies a place called Boyarka. And she has a story to tell.