Posted on November 16, 2013 by The Director of Digital Media

When asked what I do with most of my day, my answer is learning Torah. I sit from 8-3 most days of the week (sometimes till much later) learning text. During my summers and in part of my free time I am teaching text as well. I even try and learn text (like Daf Yomi) during my free time- just because. Do I enjoy what I do? Yes, most of the time. Is it something easy? No, not at all- there are many times I don’t understand what I am reading and all I want to do is hit my head against a wall, or times that I don’t have energy to sit there and try and understand a text, or times that I want to yell at the rabbis because I don’t know why or how they can say what they said, and other times it is just that I am too tired to look up every other word in a dictionary because without it I wouldn’t understand, and everything I am reading is either in Hebrew or Aramaic. 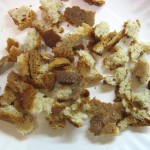 This past month in the Daf Yomi cycle, we were learning Mesechet Shkalim, and I learned that I am not the only one (nor the first) to feel this way.

R’Chaggai said in the name of R’Shmuel bar Nachman: The earlier scholars ploughed and planted, weeded, trimmed, hoed, reaped, gathered, threshed, winnowed, selected, ground, sifted, kneaded, formed and baked- but as for us, we have not what to eat. (Shkalim 13b)

According to the Korban Edah, R’ Shmuel bar Nachman is saying that, although previous scholars tried to make it easier for us to understand and remember, we still find it difficult to comprehend the Torah. In another version of the gemara ends with “but for us, we have no mouth with which to eat.” According to the Pnei Moshe, R’ Chaggai is saying that we lack the tools to absorb the teachings that were prepared for us.

So my question is, if it is so difficult to learn, maybe so difficult that I won’t be able to understand anything, then what is the point in spending my day learning and teaching (even if I didn’t learn full-time, why learn at all)?

These rewards do not seem to have to do with the act of learning at all! According to Rashi (Brachot 6b) the reward for having a halachic discussion is mainly for the mental effort spent in understanding its reasoning.

Our reward is not based on those ideas that we just know, the things that we are born with, or grew up knowing. We are rewarded for our efforts. Yes, learning can be easier if we grew up in a place where we learned how to learn, or if Hebrew was our first language. But we are not rewarded for our luck of where we were born, we are rewarded for the efforts that we put in. We are told to struggle, to fight, to push ourselves to try and understand.

So maybe our goal is not to know or comprehend everything, because that is just not possible. But just because something is “too great” for us, doesn’t mean that we shouldn’t try to work hard, and learn a bit on the way. And hopefully, we will be merited to understand a little bit here and there, and have the energy and strength to continue toiling through the Torah and be able to nibble on a tiny crumb of the bread.