Why was Rosh Chodesh Tevet different?

Originally posted on her blog.

This month, Tevet, at the Kotel really felt different. Maybe it was logistics. It started at 8am and not 7am. I decided to walk. Someone (from WoW) stopped on their way when they recognized me, picked me up, and gave me a ride. Pardes is on Hanukkah break so I didn’t have to run stressfully back to school in fear of being late for my lesson. I went out to breakfast afterwards with four other people who prayed with Women of the Wall (WoW) at the Kotel. We relaxed, reflected, laughed.

I’m sure all of these things contributed to a nice morning. But it was more than that, I really felt that the davening (prayer) itself was nicer than usual. First, there weren’t as many people there in general. The summer is gone, the tourists went home, the weather wasn’t great. Only the “die-hards,” the men and women who always come were there. And really, it was nice. It was intimate, I could here the shaliach tzibur (the prayer leader). Even though we did a nusach (tune) that I didn’t know, we did everything out loud together. It was slow, some of my friends at school would have found it very difficult (they prefer to daven quickly). But I liked it. I knew many of the women (and men) who were there. I was greeted with loving smiles and hugs. What it really felt like what my normal morning minyan (or for people who believe only men can make up a minyan, then I can use the word tefilla.) I like praying in a group of people I know and care about and who care about me. And that’s what happened this morning. 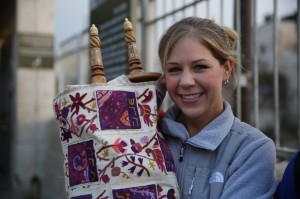 Holding the Torah outside the Kotel because we’re still not allowed to enter with it or use it in the women’s section.

From the first moment that the woman picked me up on the street, to the women at the entrance who let me hold the Torah for a few minutes before going into pray, to women coming in around me and rubbing my back to let me know they were standing close (protecting each other from the screams from the other side of the mechetza). From the personalized blessings from Nathalie, the shaliach tzibur, to warm accepting laughter I received when I was standing under the tallit for a blessing and I told the women around me to pray hard because I wanted to find my husband. There were mothers and daughters praying together. Women who could have been my mom. Young women my age who have been empowered to stand up for what they believe. Older women who have seen change and stagnation. Because of all these things, I felt cared about and important. I felt that my prayers were significant to this group and our prayers were rising together. For me, this is why I like to pray in a group and specifically why I like to pray in a group of women. It’s safe, it’s strong, it’s supportive, and it’s non-judgmental. I really hope and pray that every woman gets to experience an openness of prayer like this.

Last month contained it’s own beauty. It was a success that hundreds of women from all over Israel and America came to pray together. But it wasn’t intimate, it was big and successful in celebrating the 25th anniversary. I was happy for those women to be able to come and have a wonderful experience at the Kotel. Something they will remember for the rest of their lives, but they went home. And what was left, were the women who give themselves every month. The women who don’t want it to be a show, who will keep coming no matter how long it takes. Maybe that isn’t provocative, maybe that doesn’t make the headlines, but it’s exactly what I want. And talking to these women this morning, I realized I’m not alone. I’m not going to Robinson’s Arch. I am going to pray in the women’s section, with tallit, tefillin, and one day, one Rosh Chodesh, hopefully soon, I and others will read from the Sefer Torah.