“And Receive Every Man with a Pleasant Countenance”

Contrary to my previous belief, “Jewish Renewal” is different than the Jewish Renewal rabbinical movement in America involving kabbalah and spiritual re-invigoration. This “Jewish Renewal” is התחדשות יהודות, the movement to renew Jewish culture in the state of Israel. Jewish culture (sometimes called “Hebrew Culture”) consists of Israeli literature, music, theater, philosophy, shopping, food, the bar scene… basically anything that doesn’t involve being religious. Some Jewish Renewalists, however, study Jewish (and secular) texts in a beit midrash, and use these texts to inform their art, or their ideas about social justice.

It was an interesting day, but by the time evening rolled around, I was fed up with being told that living with Israeli culture is enough and who needs Shabbat and the synagogue and halakha? And of course Orthodox Jews are insistent on hogging the keys to religion, plus they are and close-minded and they unfairly dominate the politics of the State of Israel. And really, living in Tel Aviv is amazing because the bar scene is so cultural and there is so much culture here and you are constantly surrounded by culture and you can get culture anywhere you turn so why live anywhere else but Tel Aviv?

Anyway, there is one moment I want to share with you. During one of the many speeches we heard over the course of the day, the phrase was said: “I assume most of you here identify with the Reform, Conservative and Reconstructionist movements?” Me and a few other people immediately spouted an audible “No,” while the rest of the audience laughed, albeit uncomfortably. The speaker continued, “Well, at least most of you do…” and then bustled on with his speech, although what it was about, I do not know. I was too lost in my own thoughts and frustrations.

Here is the result of my scribbles: a list of beliefs and practices and where they fall on the religious spectrum. Oioioi; it’s a jumble. And I’m not even sure all the classifications are right. But here goes:

There you have it. Make of it what you will. I am not going to add up the Os, MOs, Cs, Rfs, and Rcs and see which one makes up the majority, because the items in this chart have different weights. Some are daily actions; some are fundamental principles of faith. When it comes to Judaism, simple tallies just aren’t valid.

So after I scribbled my heart and soul onto a piece of paper, I was a little too distracted to listen to any more speakers. When the female Reform rabbi started telling us that there are many Jews on the spectrum between non-religious and Haredi (as if everyone in the room didn’t already fall into that category), I left. I went to the bathroom, evaluated the fact that I was hungry, and wandered into an art gallery filled with pictures by a Jewish European painter whose name I can’t pronounce or spell (we were being held hostage at none other than the Jewish Diaspora Museum. Too bad we didn’t actually get to see the exhibits). 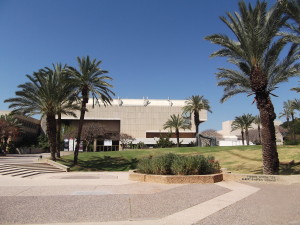 Except it was pouring rain.

Before I could really get a look at the art, however, the security guard engaged me in conversation. First he asked if I had a ticket to the museum. I said no, but that I was with the group in the auditorium. That got him interested.
“There’s a girl wearing a kippah in there!” he said. (I had been surprised that there was only one).
I explained to him where we were from, what we were doing, and that it had been a long day.
“So you’re Reform?” he asked.
“No.”
“Conservative?”
“No.”
“Um, Orthodox?”
“Well, not really. Somewhere in between.”
“I grew up Haredi,” he said. “I just made aliyah from England a few years ago.”
That’s funny, I thought. You don’t sound like you’re from England. And you have a tattoo.

He proceeded to tell me that he grew up in a family that is half Chabad, half Breslov Hassidim. They spoke Hebrew at home, and sometimes Ladino. Ladino, he explained to me, is to Mizrachim as Yiddish is to Asheknazim. A dying, unique language, Ladino is a blend of Hebrew, Italian, Spanish and probably something else, too. That’s why he speaks English with something like an Israeli accent. He’s 26, and just got out of the army a few weeks ago.

“Why are you working here?” I asked.
“I wanted a quiet job,” he said. “Something where I could have time to figure things out and study when I want to.” He showed me the book he was reading: Pirkei Avot. In Hebrew. With commentary. “It’s a Hassidic thing,” he said. “Hassidim say you should spend all your free time learning Pirkei Avot. Halakha teaches you how to be a good Jew. But Pirkei Avot teaches you how to be-”
“A good person,” I finished.
“Yes.” He smiled. “I keep reading it over and over again.”

“Shammai would say: Make your Torah study a permanent fixture of your life. Say little and do much. And receive every man with a pleasant countenance.” (Pirkei Avot 1:15)

So he’s figuring things out. He first stepped out of the Haredi world when he went to university in England and studied physics. Now he’s thinking about getting a Master’s or Ph.D. He still wants to be a religious Jew, but doesn’t know how to define himself. Welcome to the club, I thought.

“You know why I want to be religious?” he said. “I really like the Hassidic philosophy of always trying to do better. You’re learning how to observe Shabbat, you’re trying to pray, and Reform and Conservative Judaism say ‘that’s enough.’ But the Hassidim say to always reach higher. You can always try to be better. And that’s what I want to do.”

We exchanged names (but not handshakes), and I told him I’d like to come back sometime to actually explore the museum. I left with a smile, thinking, Only in Israel can I exchange Jewish ideologies with the security guard watching over an empty art exhibit. It was the most authentic Israeli experience I’d had all day. And I loved it. Too bad it didn’t have anything to do with “Hebrew Culture.”