Posted on December 15, 2013 by The Director of Digital Media

Early last week, we made our first trip to the shooting range. Winter, which had been largely absent until that point, decided to arrive. The winds picked up, spraying sand and dust onto and into everything. I had no idea that dust could actually accumulate in the folds of a person’s ears, but I suppose you learn something new every day. Before any shots can be fired, we are required by army regulations to go through a refresher session on the rules of the range, who is authorized to give commands, when a cease-fire must be called, so on and so forth. In the middle of one such session, the skies opened. Torrential rain. While it definitely served to settle some of the dust, what followed the rain was even more remarkable. A rainbow. Even the commanding officer stopped to admire the spectrum of colors as they spread across the far end of the range. 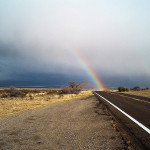 For the rest of the week I could not shake the juxtaposition of guns and rainbows from my mind. There we were, learning how to shoot with proper technique, so that all of our bullets end up within a very small radius. Obviously we were taking aim at targets, but ultimately the purpose of these exercises is to little-by-little prepare us for war, when the targets would not be paper. The rainbow, slowly emerged from the clouds, and then was gone, almost more quickly than it came. God, in Parashat Noah, uses the rainbow after the flood to symbolize the covenant, and commitment, that the world will not be destroyed again. What was I to do, holding an assault rifle while admiring the beauty of a rainbow?

I was left with two enduring understandings. The first: While the shooting range is hardly at the level of the Biblical flood, I became keenly aware of the destructive power that I was holding in my hands, and the importance of retaining my humanity even in the course of training for something that is inherently destructive and unthinkable. The second: The rainbow of Noah suddenly came into focus. God could have selected any means by which to demonstrate the covenant.  The bow became a symbol of peace, even though in its time the bow was the weapon of choice. Therefore, the bow was the logical choice to demonstrate God’s promise of no further destruction, (perhaps also the fact that water was the source of the destruction and the covenant, but that is for a Parashat Noah dvar Torah). While I am not sure of a modern equivalent to the rainbow, that rainbow in the desert this week underscored the human desire to seek symbols of peace regardless of the prevailing circumstances.