Every Thursday afternoon, Misha volunteers for the Domari Gypsy Society, a non-profit organization that operates out of the Shu’fat neighborhood in East Jerusalem. Domari Gypsies have been living in the Middle East for centuries, and the Jerusalem Domari Gypsy community has been present for over a hundred years. Although Domari Gypsies speak Arabic and practice Islam, the people in their community often discriminate against them because of their ethnic background. As a result of such prejudice, children in the Domari Gypsy community of Jerusalem often drop out of school early, and adults are often unable to find local jobs. 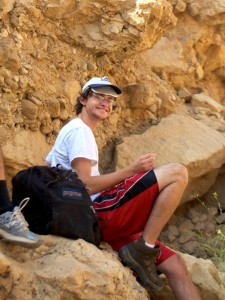 At the Domari Gypsy Society, volunteers and employees work to create a safe space for the Domari Gypsies of Jerusalem. Amoun Sleem began the program in 1995 and built the program’s community center six years later. In this community center, the Domari Gypsy Society runs a variety of educational programs. Such programs include entrepreneurial and skill-building classes for women, after-school tutoring for children, and several programs built to strengthen Domari identity and culture.

As the “resident English speaker,” Misha takes on a lot of responsibility at the Domari Gypsy Society. Whether he’s writing grants or editing public statements, Misha is committed to his work. It doesn’t hurt that: “I really like hanging out with my boss because she’s way cool,” and “She makes great tea.” Besides spending time with his fantastic supervisor, Misha truly enjoys the opportunity to interact with a group of people that he had never interacted with before this year, in an area of Jerusalem that he may not have ever encountered otherwise. It’s comforting, he says, to help out in a way that is outside of the contentious realm of Jewish-Jewish or Arab-Israeli conflict that we often seem bombarded with in Jerusalem. For Misha, it feels incredible to be a representative of the religious Jewish community among Domari Gyspies.

Of course, the Domari Gypsy Society would love more representatives of the Jewish community (or any community) to donate and volunteer at their community center. For more information, please contact Misha at misha dot brenner at gmail dot com.