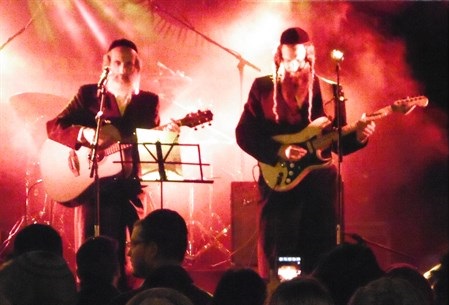 A few nights ago I went to a music and light festival in the old city.

Earlier that day, I signed a contract for my job next year- working with Jewish communities in the South, based in Jackson Mississippi.

I’ve become aware of what little time I have left in Israel, and the huge shift that will take place with this next move in my life.

As we entered the Jaffa gate, we were greeted by a Tom Jones-esque man, singing to a crowd of young, hip Israelis.

The next band was a family of Mizrahi Jews, playing varied instruments and jamming out to liturgical tunes.

This was followed up with some gypsy music, and a violinist playing on the street corner.

In the Jewish quarter, A hasidic reggae band played on a massive stage inside the cardo. Halfway through one song, the lead singer pulled out a shofar and began calling out to the crowd reminders of tekiah.

Looking down upon the crowd, I thought “This is more Jews than I will see in the next two years of my life combined.”

As we journeyed into the Muslim quarter, another gypsy band greeted us at the corner of a narrow street.

The next band was the only non-Jewish one. Singing beautifully in Arabic, this band caught the attention of two yeshiva boys, who stopped, sang along and shouted with joy at something the lead singer said in Arabic.

Just when I think I have dynamics in Jerusalem figured out, people surprise me.

Next we stopped to listen to black Hebrews from Dimona singing on a huge stage in the Christian quarter. Along the via delarosa, a man with a fiddle played upon a roof.

The night ended with Red Band, an Israeli cover band that did an amazing Western rendition of Paper Planes, accompanied by puppets.

The night left me feeling high on culture and religion. I walked away proud to live in such a city, and devastated by my future away from it. I am forever surprised by the interactions between peoples, both good and bad. I was embarrassed by the lack of stages and music in the Muslim quarter, compared to the incredible presence in the Jewish quarter. That being said, I’m reminded that the festival spanned all four quarters and sent tourists down winding alleyways they would probably otherwise avoid in the night. I’m one of those tourists. I was struck by the beauty of the city at night, the vibrance. I’m blessed to be here, and i’ll spend my last moments in this city constantly reminding myself.

I will again be a minority in Jackson, but I will bring with me memories from the holy land. Next year in Jackson.