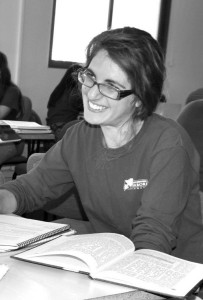 As I got ready to lead the Seder for the first time for my family in New York City this year, I remembered last year when I was at Pardes, when I wondered at the fact that I would be sitting at a Seder table in Jerusalem and saying “hashanah ha’ba’ah b’yirushalayim!” I was physically in Jerusalem; I had made my pilgrimage (in fact, I am pretty sure that I went to the Kotel during Pesach) but at the Seder table in Baka, I knew that the next year, when I was outside of Jerusalem, that phrase would hold more meaning than ever before. The following year, my pilgrimage would be more difficult: the task would be to find a Jerusalem that I could go to that was not a physical space, but a mental state.

This post is for those who are getting ready to leave Pardes and go to the next stage, and in acknowledgement of all of us who are searching for ways to have our previous time at Pardes fill in and brighten our present stage of life.

The Torah explains that one is expected to make pilgrimage to the Temple in Jerusalem three times (shalosh regalim) during the year: Pesach, Shavuot, and Sukkot.  Studying Mesechet Chagiga as part of the first Kevah / Pardes alumni learning group in New York City helped me to understand that this mitzvah of pilgrimage is one that accepts, and even asks for, something different from physical movement. 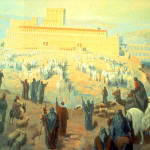 Studying Chagiga with the Kevah group, I found companions that were also searching for how to make a mental pilgrimage back to Jerusalem, but one marked by the freshness of our current situation, and not nostalgia for our time at Pardes.  Every other Monday night from late January to late March was a treat amid my profoundly harried and fast-changing schedule.  Although I was in a place that is the most familiar in the world to me, with all my various commitments of part-time jobs and looking for more part-time jobs, applying to graduate school, traveling to graduate schools, waiting and waiting and waiting to hear back…it was hard to find peace in the present.  All my work was about pushing forward to the next step. Paradoxically, I could feel grounded in text entirely about movement from all angles, sitting with people coming from I did not always know where. The Gemarrah, our teacher Jon Kelsen (himself a Pardes alum) and the members of the group, helped me to think about pilgrimage not only as a traveling to a particular geographical location, but much more as a journey to a state of heightened awareness about a current location and situation.

Pilgrimage began to mean a celebration of the new and the unexpected, of the things that did not quite fit along the way.  I am learning to recognize and hold those moments of uncertainty up as the key components of a holy encounter.   The first Mishna states that “ALL are bound to appear [at the Temple] except… ” It is that first ’כלה’ that appears bold and decorated in the Gemarrah text, and yet the list of exemptions was impressive and troubling: is the emphasis on inclusivity, we wondered, or on keeping people out? And the Gemarrah only added layers upon layers to that question: what about the people who did not fit neatly into exemption categories like “blind” or “deaf” that the Mishna mentions – what about those with one eye, those who can hear but not speak, or vice-versa. The Mishna says slaves are exempt from pilgrimage, but what about one who is “half slave and half free?” Should these people, who are halfway between clear obligation and clear exemption fall into the ALL of the obligated? If not, it seemed that there would be few people who fit the bill for worthy of pilgrimage… fully whole, fully healthy, fully-aware people ready to see and be seen, hear and be heard, and who felt fully free, physically or spiritually.

In a world outside of Pardes in Jerusalem, where pure studying and prayer cannot be the focus of every moment of every day, it feels especially important to accept the rarity of that pure, perfect pilgrimage, where one can give oneself wholly to spiritual pursuit. I yearned for those moments where everything would go away, when I could study on my own, and when it would just be us and the text.  Not being able to have those moments all the time made these hour-and-a-half-long encounters so very poignant.  In the finding of a little space between everything else, we could help each take whatever situation we found ourselves in, take those up into our pilgrimage back to Jerusalem, back to the Temple of study.

Our first meeting took place at the Pardes office in New York that made us all laugh that it was much like Pardes in Jerusalem! The office is part of a much larger building marked by ongoing, rather mysterious renovations; the windows need some help opening. We met in a back room, at a long white table, with a single, small dry-erase board on the wall behind it. After that, we migrated to the cozy apartments of different alumni. Laura Herman, our group organizer, always laid out chips-ahoy cookies, chips, and honey-wheat pretzels, and there was always tea and diet coke. As I munched and learned, I remembered perusing the snack rack and hunting for a clean mug to get some tea while listening to David Berman’s music in the kitchen, dropping shekels into the little blue collecting box.  I realized that everyone else around these tables probably had similar memories, just from different years, and different arrangements of people. I walked up new hallways and new steps, always knowing that I would find warmth and energy in this apartment to which I had never been, and listen to perspectives that would make me pause, and that we would challenge and support each other to slowly unravel the tightly wound wisdom of the text. 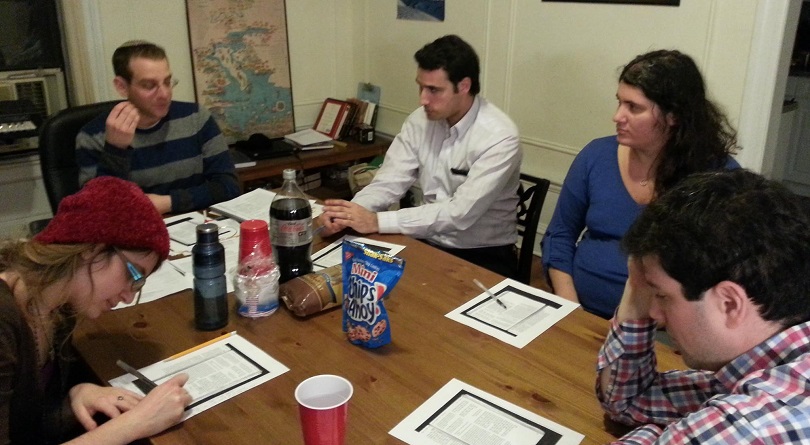 Mesechet Chagiga also features the famous character Elisha Ben Abuya, who, after his encounter in the overwhelming world of the Pardes, names himself Acher (other), and turns away from a life of Torah.  Although he insists that there is no place for him anymore in the house of study, his story is marked by a quiet insistence from the voice of Rabbi Meir that he can still come back, he can always still come back.  And Acher brings gems of wisdom from his outside perspective, and uniquely marked because of his outside experience.  The character of Acher, I realized as we were coming to the end of the study session, was putting a seal on a pattern the Gemarrah had established from the very first sugia: it is the people who occupy the in-between categories with whom the Gemarrah was the most concerned, and wanted to bring into the conversation. Occupying the in-between space is so much of the focus of the mesechet, and acknowledging the reality of imperfection and the constant human experience of transition is a key component of a complete, pure encounter with God.

During our penultimate session on Chagiga, Jon turned to the immediate aftermath of the Exodus to look at this idea of a journey in process– when the Israelites taste of a different kind of maror: they are out of slavery, but it is lingering in the waters of their new freedom (Exodus 15:22-25).  God makes the water sweet again, and thus reminds the Israelites again about the multi-step process that their transition will entail.  As I was preparing for the Seder this year, I finally was able to address one of the questions I have had for a long time: why, after going through all of maggid, and making it to the other side of the Reed Sea, after washing our hands for a second time and tasting the matzah of our redemption, do we then double back to eat the maror, and then the matzah with the maror?  I learned that korech means embrace, or entanglement, and that by doubling back upon the difficult bits of the story, we acknowledge that this move from slavery to freedom cannot be a clean break. So many of our texts and rituals hold up the idea that we are always in between – and in joy we come together during the chagim to share our respective journeys and the ups and downs along the way.

I hope that you all found meaning in the pilgrimage of Pesach this year, in your current geographical location. May you continue to recognize and enjoy the many steps of your transitions.