It All Started With the Priest on the Plane

It was about three weeks ago that my mom was flying to visit me in Israel. Another blog about that to follow, hopefully soon. She flew from Miami to Tel Aviv, through Rome. She highly recommends this flight because you get to Rome in the morning, have breakfast, fly to Tel Aviv and land in the evening. Just in time to go to sleep and avoid jetlag. It was on the second leg of the flight that she was sitting next to a Priest, flying to Israel for Holy Week.

Passover and Easter were on the horizon and many people were making pilgrimage from all over the world to converge at a place buzzing with holiness, excitement and hummus. The Priest explained to my mom how, when he graduated from law school, he was offered a job at a big firm. When he walked into the office to have “the” meeting with the partners, he bore bad news all over his face. He had been called by G-d to dedicate his life to the Church and he couldn’t accept the position. He just knew, somewhere deep inside of him, that

he was destined for something else, another path. He took vows of chastity, poverty and dedication and completely changed the direction of his life. He went on to explain the values of The Church and have deep, philosophical discussions with my mom about the cross section between religion and nationality in Judaism, about the importance of the State of Israel and the inner workings of religion.

He then explained something, which in the second hand telling of the story, I found to be fascinating. He said that the Church of the Holy Sepulcher has been in the hands of a Muslim family that lives in the Old City for thousands of years. Each evening, the Nuns, Priests, Monks and other employees exit the Church. After they have proceeded out, someone climbs up on a ladder in order to reach the very high key hole of the door to the Church and locks the door from the outside. The individual then hands the key through a small opening, to a member of the Muslim family who owns the Church, and he remains inside all night. In the morning, the same procedure is done, but in reverse. I had no idea! 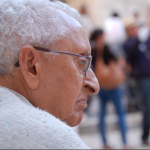 When the blog about my mom’s visit finally appears, you will see the immense programming that we fit into every single day, how much walking we did, and how many interesting people we spoke to. This story will fall somewhere amongst those. One day, after miles of walking, standing in the hot sun, exploring the Old City of Jerusalem, we decided to try and make our way to The Church of the Holy Sepulcher. Screen Shot 2014-05-02 at 4.52.08 PMWe were tired and probably dehydrated and two approximately 10 year old boys convinced us to allow them to show us the way to The Church. We ran after them, trying to keep up with their nimble steps. They went down back alleys, pushed their way through crowds, soared up stair cases and emerged at the courtyard of The Church. It was at this point that they also convinced us to give them each payment for their services.

When we arrived at The Church, the door was closed and people were gathered around staring at something that we couldn’t see. We just didn’t have enough energy to push our way to the front of the crowd, so we decided to sit down. We asked around, but nobody knew quite what was going on. The man to the left had waited his entire life to make it to The Church and he, too, arrived to find the doors locked. Disappointed is to put it lightly.

The noise level of the crowd began to pick up — something was going on. A ladder appeared and a man began to climb up. We couldn’t believe it. Exactly what the Priest told us was happening exactly at the moment that we arrived at the Church. We were going to see the key ceremony! It happened almost verbatim to the story. The Priests, Nuns and Monks filed out of the front door, holding crosses made of silver and wood as well as Rosary beads. When the procession was complete, the door was closed, the man climbed up, locked the door and handed the key in! We were amazed.

The rest of our trip was amazing — we laughed, walked, explored, investigated and ate our way through Israel. Visted Tzfat, Tel Aviv, Yaffo, Rehovot, Petah Tikvah, Talpiyot, Baka, Kiryat Yovel, Mea She’arim, Kiryas Belz, and many more places. We ate a lot of matzah, but managed to fit in Shakshuka, Hummus, Shwarma, Falafel and so many salatim. And then I bid my mom farewell on the beach of Tel Aviv.

Today, I went to East Jerusalem with Encounter, (Also, blog to follow. Oy – where does the time go?) and met with Hiba Nusseibeh. Hiba, an approximately 26 year old Palestinian woman, told us that she was born and raised in Jerusalem and that she has lived here for her entire life. She had never been to West Jerusalem without her parents before the age of 18 and spent most of her childhood in East Jerusalem in a neighborhood called Sheik Jarrah. She told us about her love for the Old City and about her family’s history in Jerusalem. And then, casually, she said that her family had been in Jerusalem for thousands of years and held the key to The Church of the Holy Sepulcher. WHAT?! Her family? I was sitting across the table from someone who held the key to The Church, to this story, to this continuous stream of events that had been going on for three weeks?

Jerusalem, a city buzzing with interconnectedness. Stories overlapping, mingling. Narratives occurring simultaneously. Take a step back and observe another perspective. Who knows who you will be sitting next to.

It all started with the Priest on the plane.