To Capture a Moment

This past Tuesday night was the Masa Israeli Cultural event at the International Convention Center in Jerusalem.  Top Israeli artists of all kinds were brought in for us to hear from, and the night culminated in an incredible performance by the Voca People. I chose to go to the session with Alex Levac, a renowned Israeli photojournalist and street photographer. He studied photography at the London School of Printing, and has worked in Brazil, London, Los Angeles and Israel. He used to work at Hadashot and since 1993 has worked at Haaretz, and does a photo of the week for them.

You might think that living behind a camera is not really living. But hearing Alex, that couldn’t be farther from the truth for him. To do the work he does, he has to be incredibly observant and aware of everything going on around him. Throughout his talk, he kept reiterating how unbelievable it is what we miss when we’re not looking. Amazing things happen around us all the time, and we rarely stop to notice.

Alex gave us a window into his unique way of capturing the Israeli experience. He showed us a number of his photographs and shared the story behind each of them. He humbly said, “I don’t really like talking about my pictures. I think pictures should speak for themselves.”

Here are just a few: 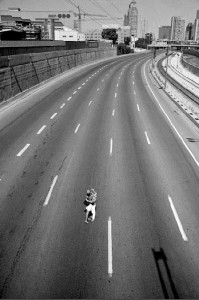 This picture was taken on Yom Kippur in Tel Aviv. Alex was assigned to go out and capture the atmosphere of the day – and he clearly succeeded. No other day of the year would anyone be able to stand kissing in the middle of a Tel Aviv highway. Lucky for Alex this couple lingered there for a few minutes, so he was able to set up the shot perfectly from the bridge he was standing on, and this was the result. 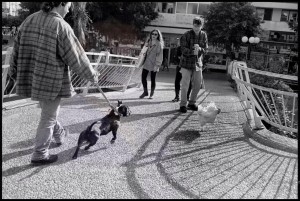 This was taken at Dizengoff in Tel Aviv. The guy with the chicken was making a Purim shpiel for his yeshiva in Jerusalem. They didn’t want anyone from their yeshiva to see so, naturally, they went to Tel Aviv. None of Alex’s pictures are staged, but he has mastered the art of waiting for the perfect photo opp. He talked about seeing one interesting element, but then waiting for something else to happen to make the photo even more unique. In this case, he first saw the guy with the chicken, which is interesting in itself, but had a feeling it could be even better. When the guy with the dog came by, Alex was ready to capture this photograph. 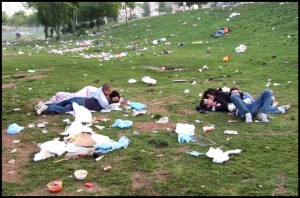 The morning after: This was taken at 6 AM after Erev Yom Ha’atzmaut (Independence Day Eve) at Gan Sacher in Jerusalem. I think I’m going to go with Alex on this one – this picture speaks for itself 😉