Some of the most interesting stories from this year have happened on buses. (Maybe it’s because Israelis will talk to anyone like they’re family, whether you’re interested in talking or not. Maybe it’s just because I spent a lot of time taking buses.) Here are just a few:

– A religious woman gets on a Jerusalem city bus, plops down on the seat facing me and asks, in an American accent, if it makes a certain stop. I tell her it does. Oh, where am I studying? How do I like it? She had heard such wonderful things. As she’s getting off the bus she calls back to me “Move back here and raise your family! Great medical insurance and no yeshiva tuition!”

– A couple of friends and I boarded a bus to go to Sataf, right outside of Jerusalem. We were talking amongst ourselves (in English), trying to figure out what stop to get off at, and the woman sitting next to me chimed in (in Hebrew). She told us, yes, we had the right stop, and oh where are we from, where are we learning, we learn with boys, too? That’s good. Do we have enough water for our hike?
At the end of the day, waiting at the bus stop to go back to Jerusalem, we see the bus pull up, and who’s on board? You guessed it – the same woman from that morning. When she sees us, she smiles and waves, and as we get on the bus asks us how our day was. 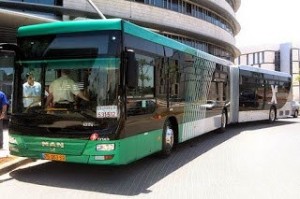 – A middle aged man sits down next to me on the bus to Tel Aviv and starts talking to me in rapid fire Hebrew. He pauses and says, “Can you understand me?”
“If you speak more slowly I can”
“Slowly I can not do. I will talk and you’ll understand me.” Naturally, he starts asking about my whole life story: where I’m from, what I’m doing here, what I studied, why I’m not going to move here, do we have this beautiful view in America?, am I religious, do I know what is intuatzia? (yes, intuition. Hebrew took that word from English.)
“Eh… so, you like music? You know, I have a son who’s studying music at Haifa University. Very smart, good boy. I am his father, so of course I say this, but it’s true. He would kill me if he knew I was talking about him to a girl on the bus. Do you have Facebook? Here, I tell you his name, look at his profile…”
Before I knew it, we had talked the whole way to Tel Aviv (almost all in Hebrew). When we arrived at the station, he kindly asked someone where I should go to catch my next bus, and made sure I walked off in the right direction.

Miscellaneous “Only in Israel…”

…During the largest snowstorm Jerusalem had seen in years, would people use squeegees to clear their porches and tractors to clear the roads. And try melting the snow with hot water.

…Would policemen outside of the Knesset (parliament) have a snowball fight with each other.

…Would Kah Echsof play in the Jerusalem Central Bus Station Thursday night, and the security guard sing
along.

…Would a friend of a friend come up to you at the bus stop and say “I just learned some incredible Torah from the guy sitting by the garbage can! He said: ‘Trash. It’s like truth. Everybody has it, nobody wants it.’ Brilliant, right?!”

… (Photo below) Could this happen on your way up a mountain for a tiyul. Upon seeing this, the driver of the second bus says “beseder, zeh lo norah!” (“okay, this isn’t terrible”), gets into the driver’s seat, and without batting an eye nonchalantly maneuvers his way past the sharp curve back onto the path, completely unfazed. 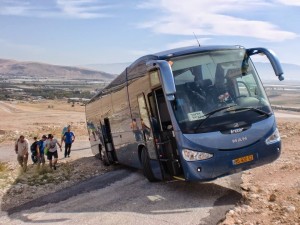 Maybe this should’ve gone with the bus stories