[PCJE] The Heart of Israel

Posted on September 22, 2014 by Samantha Vinokor 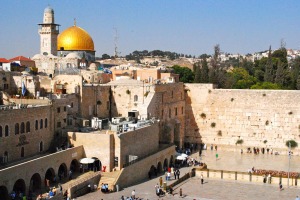 I struggle deeply with my feelings about Jerusalem. For years, I felt like I didn’t “get it.” I didn’t understand that feeling that I heard people talk about. That sense of holiness, of connection to God, which they only experience here. While others longed for Jerusalem, my mythical city was Tel Aviv. The fast-paced, modern city, full of bars and coffee shops, the ultimate symbol of the Zionist rebuilding of the land of Israel has been my promised land.

When I learned in religious school about Israel being our homeland, I was able to understand that literally, thanks to an Israeli father, and a family that gave me a physical place to call home in Israel. Years of visits were marked by Tel Aviv, by the annual return to my great-grandmother’s apartment, to the beach that my grandfather played on as a child, to the coffee shops that had been there since my father was born. This was my Israel, and this was sacred to me. My Zionism was shaped by my connection to this newborn city, which symbolizes the success of an ancient dream.

But my challenge comes from the ancient city, only an hour away, yet a world apart. While Tel Aviv is comfortable for me, a modern Jew, Jerusalem calls up all of my issues with the Jewish people. It’s a place where I feel trapped, unable to go out to restaurants and bars on Shabbat if that’s what I want to do. It forces me to think every day of what route I’ll take when I walk around, because I have to remember to be respectful and not enter Haredi neighborhoods if my outfits aren’t appropriately modest. The welcoming water of the Mediterranean Sea isn’t here, and instead I am met with stone. Cold stone, slippery stone, hard, like the city that it represents. This isn’t a place of fluidity, where the sand moves and shifts as the people do. Jerusalem is carved in stone, set in history, in memory.

Why Jerusalem? Why is this city so beguiling, at once beckoning and resisting?

I am drawn in by the energy that vibrates through the ancient alleys here, leftover spiritual entreaties from thousands of years of prayers directed here from around the world. I feel the pull of history, of understanding that while I figure out my feelings about connecting with Jerusalem, I am fortunate enough to have been born in the generation that has had constant access to this city throughout our lives, something that many of us take for granted, but that has been the most fervent dream of the Jewish people for thousands of years.

I am pushed away by the sea of black hats that press against the stones of the Kotel, making this place more theirs than mine, even though I’m a fellow Jew. I’m rebuked by the tension that lingers in the air, a result of a multitude of contradicting opinions and voices comingling in such a tight space. I feel all of the problems facing Israel when I’m here, and am unable to turn away, to return to the paradise that this country offers in other areas.

Naomi Shemer, in her iconic song Yerushalaim Shel Zahav, Jerusalem of Gold, said that the Western Wall, the Kotel, is at the heart of Jerusalem, and she was right. The new city spreads out from the old, and the Old City has as its heart, its pulse, the Kotel, and all that it represents. It stands for centuries of longing, of the physical embodiment of the holiness of this land, the remnant of the Temple. It stands for tension over whom it belongs to, both between Jews and Muslims, and Jews and Jews. It is the heart of Jerusalem, which is the heart of Israel for so many, and yet I struggle.

I think it’s holy when I swim in the sea and look at Tel Aviv, seeing the successes of modern Jews, modern Zionists.

I think it’s holy when I sit in the desert, feeling the vastness of the universe, and know that I’m in the land that both my immediate and biblical ancestors called home.

I think it’s holy when I walk the streets of any city in Israel, rubbing shoulders with people of every color, all speaking Hebrew, the revitalized language of the Jewish people.

But stone isn’t holy for me. My understanding of Jerusalem as holy isn’t because of the physical structures. It’s the symbolism of them: the dreams and wishes tucked into the Kotel, because that’s the place that Jews have directed smiles and tears towards throughout the centuries. With every note that I’m asked to place, I square my shoulders and go to a place where I don’t think my prayers are heard any more than they were in New York, or would be in Tel Aviv, London, or Beijing. I walk ancient streets, teeming with modern problems, and I arrive. And for just a moment, when I lean my uncovered head in amongst a sea of black hats, I feel it.