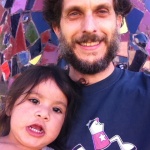 It was a sweet irony that during a break in my Gemara shiur yesterday, I found out that my first teacher of rabbinic texts, Reb Judith, as she was affectionately called, died suddenly of a heart attack the day before. She would have appreciated that, with a patented mischievous laugh and twinkle in her eye, wanting to be with “her guys,” as she referred to the talmudic sages, in the news of her death as much as she had been during her life. I want to dedicate this occasional series of posts reviewing my learning to her memory, that she may have a quick passage to the Beit Midrash On High.

Any great insights herein are my teachers’, and any mistakes are my own.

Gemara ג
This week, we started in on מסכת ברכות/tractate B’rachot, diving, in true Talmudic fashion, into the middle of it, on 17b. The Mishna starts with a phrase the immediately sets our tone, “one, which their dead has been placed in front of them,” and straight away, true to form, goes to list the mitzvot from which they’re exempted–recitation of Sh’ma, saying the Amida, putting on tefillin, and all the mitzvot that are discussed in the Torah. Your immediate relative has just died! How can think of mitzvot at this time*? Exactly.

Next, it explains when that the pallbearers–not necessarily immediate relatives–are exempt from mitzvot: before they’ve carried–exempt; after they’ve carried–obligated, even if they’re needed to carry again later. (You have to go back to the days before funeral homes and hearses to understand that carrying the dead was no small feat! Think of how many sweaty shifts of carrying it would take to transport your big-boned uncle Harry even a half mile.) But, it says, both those who have carried and have yet to carry are exempt from reciting the Amida.

Once you’ve buried the body and are returning, if you could start and finish your Amida before the receiving line, you should start, if not, you shouldn’t.

Those who are standing in the receiving line: if they are toward the front, they’re exempt (from what, it’s not clear), and those toward the back, they’re obligated.

And then, a most fascinating juxtaposition. We get a clause from a later mishna that seems to be mostly unrelated: Women, slaves and minors are exempt from recitation of Sh’ma and putting on tefillin, but are obligated in saying the Amida, mezuzahs and saying the blessing after the meal. What?! This isn’t about the customs of mourning! What might we infer by this juxtaposition. My teacher tabled the entire clause to study “in its proper place,” and my chevruta didn’t seem phased by this placement, saying only, “the sages wanted to remind us that these are other things we know about exemptedness and obligation in mitzvot.”

I don’t buy it. The Mishna is SO terse in its use of ink and real estate–why reprint this out of context? I don’t claim to have an answer, but it begs the question: what is it that we’re REALLY learning about here? Perhaps, simply, it is an object lesson in obligation, as my chevruta suggested. But these words–חייב obligation, פטור exemption–are so much the language of the entirety of the mishna, it doesn’t seem to be a chidush, a new learning. Is it that these categories of people inhabit a place that share some aspects with the mourner–not able to fully concentrate on these mitzvot, and thus exempt from them? What is it about Shema and tefillin that tell us that? I believe Rahel (Berkovits–a Pardes teacher) uses this passage as a jumping off point for a whole class on women and mitzvot that I’m not enrolled in, and my limited understanding thereof I won’t attempt to summarize, but I will submit that the Shema holds special status in the kavannah it requires, which might be at least part of why mourners, who are otherwise occupied, and women (at least in the historic time period), slaves and children, who are likewise not entirely unpreoccupied, are exempt.

Going in another direction, does this come into to tell us a bit about mourners? Do they share some characteristic with children? Even an adult child grieving a parent might, in the enormity of the realization that they’re truly an “adult,” might feel that same helplessness. With slaves? I can see how the immediacy of grief, for a parent, a sibling, a spouse or a child, could render anyone not their own master–emotionally or even physically. With women? In our culture, anyway, where tears and strong emotion are associated more immediately with women (halavai there’ll come a day when it’s equally culturally acceptable for men to cry and show a fuller breadth of emotion), then the mourner most definitely shares traits here, too.

Back on the page, however, Rashi immediately gives us an 11th century hyperlink to another piece of Gemara (noting we haven’t even gotten to the Gemara on 17b), back a few pages on 11a. He notes that the mourner is exempt, the same way a groom is exempt on his wedding day. (By the way, I’ve noticed that this is one of Rashi’s pet themes: how are weddings similar to funerals, and vice-versa. Perhaps I’ll write about that some other time.)

On 11a, we find a discussion already in progress between those paradigmatic arch-rivals, Hillel and Shammai, on when you should say the Shema. We pick up the argument with the introduction of a beraita, a piece of wisdom from the Mishna’s cutting-room floor: “בשבתך בביתך” (in your sittings in your house–from the Ve’ahavta paragraph of the Shema) refers to when you are obligated to recite the Shema, but to the exclusion of someone who’s pursuing a mitzvah; “ובלכתך בדרך” (in your walkings on your way) is to the exclusion of a groom. This is where you can say, “huh?”

And just to “clarify,” from here, we understand when the groom is on his way to the bridal chamber with a virgin, he is exempt, but when doing so with a widow, he is obligated in the mitzvah of Shema. Yeah. Welcome to the Gemara.

This is where having a guide really helps. Meesh explained that the presumption is that the one marrying a widow is also not in his first marriage, which really focuses us on the first wedding night–a first sexual encounter for a pair of virgins. OK, might be a bit nerve-wracking. Ha! Who are we kidding? For a boy who’s been fantasizing about sex since the age of 10 or 11 to finally be confronted with the imminent act itself? Completely distracting is putting it mildly! So, this says something about mental state and our obligation in mitzvot.

The anonymous voice of the Gemara then asks, “what does this come to teach?” Rav Papa answers, “concerning דרך ‘way,’ just as you go on your way of your own discretion, so to this means any time when you’re acting on your own discretion, you’re obligated in the mitzvah of Shema.” Cool as cucumber. He seems to be saying that the groom’s exception is about volition or lack thereof, as well as, and not just because of, mental state.

The matter gets challenged again, and gets clarified again in a manner I thought I understood better at the time, but essentially makes it clear that the exemption for when you’re occupied in a mitzvah stands.

A question is brought about a merchant who loses his fortunes in a sinking ship–is he exempt? He must, after all, be feeling pretty distracted and bereft. It turns out that this might be a necessary, but not sufficient condition for exempted status. You need to be actively obligated in pursuing another mitzvah to be exempt from the second, and perhaps the Shema, in particular. In the case of the Shema, Meesh suggested we think of a soldier saying “I pledge allegiance.” When he’s in war, not necessary! He’s already demonstrating his allegiance to the flag. Likewise, someone pursuing mitzvot, especially these liminal-moment mitzvot of inception and caring for the dead, you don’t need to bear witness to G-d, taking upon yourself the yoke of the kingdom of heaven (which, after all, is what the Shema purportedly does).

So, nu? What do we learn? On the one hand, it’s a lesson in practical halakhic reasoning. On the other, it’s a glimpse into the human scope of Jewish law. In Modern Jewish Thought this week, we were reading A. J. Heschel’s take on the tension of halakha (law), on one hand, and agada (story) on the other. “Halakha deals with the law; agada deals with the meaning of the law…halakha deals with subjects that can be expressed literally; agada introduces us to a realm that lies beyond the realm of expression.” Now, while this sugya was full of halakha, the agadic lies just below the realm, and it’s hinted at by the odd juxtaposition we discussed above, as well as Rashi’s connection between burial and marriage. There is something going on here about the human condition in the moment of contact with great the spiritual energy released at the moment of death, as well as that created in the consummation of marriage.

The halakha is important, I won’t say it’s not. But, as Heschel writes, “the chief aim and purpose of mitzvot performed with our body is to arouse our attention to the mitzvot that are fulfilled with the mind and heart, for these are the pillars on which the service to G-d rests.” Just as there is something in the mere focus on the do’s and don’ts that misses the point, so to is a reading of our texts without attention to the human-divine connection that underlies them. “Halakha without agada is dead,” Heschel writes, “agada without halakha is wild.”

And so ends this blog post, more out of pre-shabbes necessity than completion of thought! May you be blessed to study and practice our tradition in the balance of halakha and agada, knowing moments of great intensity in which you can leave the structure behind, as well as mundane moments where the structure holds you up.
* This status, which I loosely call “mourners” in my post, is that of אנינות, deep sorrow, a period which lasts from the time of death until the burial. If you’re interested in an overview of practical halakhot on mourning (or anything else), I can recommend Isaac Klein’s classic Guide to Jewish Religious Practice.