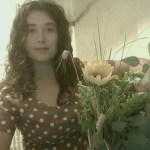 At Thursday’s Pardes open mic, I shared a version of the story (midrash? heresy?) below. Tonight, I wasn’t sure whether or not it would be appropriate to post it on the blog — after all, I can hear fireworks and gunshots in the distance, and I feel as though I should be writing about that instead of spinning fairy tales. But love permeates the air here as much as smoke and fury does, and in the last few days I’ve been trying to remember that. So, here’s a story about love.

They say that God created the world 103 times before creating the world we know. Each time, God would change a single particular thing, like a draftsman at his easel, drawing and erasing and redrawing, drawing and erasing and redrawing. And so there were 103 worlds that came close, so the story goes: worlds that were so right, so well-crafted, that they were allowed for some time to exist. Given time they would destroy themselves, or take the first steps on the path towards destruction. Then God would sigh for a moment, and erase a line on His easel. In the erasing of that line, the old world vanished. In the first new pencil mark, the new world was created.

As hard as it is to imagine, the first one hundred worlds existed without people. It was in these worlds that the order of the universe was refined, its physical layout, its immutable principles – what we might call the laws of nature. Water learned to evaporate into the air and return once more as water. After a few unpleasant and poorly timed disappearances, matter was made to conserve itself. Things no longer floated, but were carried always down as though swooning. The corporeal world got closer and closer to perfection. And yet, as God looked at it, He felt a distinct lack of something. All these phenomena were so beautiful, so well-designed. But they were just toys, separate from one another, certainly separate from God Himself. He looked at the 100th world he had made, and he felt cold.

And in the 101st world, he decided to set down an echo of Himself. He resolved to make a thing with a body, but with a glimmer of His own intelligence. Thus, man was set upon the earth. He was a able creature, bright, with the capacity to organize and name the world around him. He was more than the earth’s steward: he was its butler, humming with facts, labeling the world and keeping it running like clockwork. God felt things brought into a kind of order, and felt that order always maintained, and was pleased.

As the world went on, though, He sensed that something was still missing. Now, with the addition of men, nothing was really wrong. It wasn’t like the other worlds, where mountains had caved in on themselves or pigs had woken up in the mornings with giant blisters bursting from their udders. Rather, all that God had to go on was a sense – that there was a great potential for beauty and wonder in this world, and no way of bringing it to life. Nothing happened to surprise God, or to dazzle Him. God was becoming bored with His creation, and what was the use of pouring His time and sweat into a boring universe?

So he took smart, organized, deadly dull man and placed in him a dangerous gift: the desire to create. He pulled the human race from bright to brilliant, and lit up their logical minds with the fire of imagination. And the things they made, the pace at which they learned, were inconceivable. They bred leviathans and grew figs the size of babies’ heads. There were buildings that pierced open the sky, and there was a man who burnished himself in gold and rubies until his every step shone like the sunrise. So, too, were there explosions that popped craters in the surface of the earth, vast and ingenious scythes that shaved the trees down to stumps, drugs that caused people to cough their bellies out through their throats. Men wanted so badly to make wondrous things that they saw the world as a hindrance, and saw one another as enemies. The world was a smoking ruin within ten years. God didn’t need to destroy that world in order to create a new one; it had destroyed itself already.

When God created the 103rd world, then, He created people who could not help but be tied to one another. It was a world of perfect love, because the lovers were inseparable. Each human being was two souls: a body like ours, but with a pair of heads perched on the broad shoulders, and four arms with four hands and twenty fingers, and four legs all around the body like the points on a compass rose. Together they went through the world, two in one. They ate from the same long trays, and sometimes their hands fed one another’s mouths. They spoke constantly, as though talking to themselves, observing the world and loving it and creating it anew in kisses. Two-headed, two-souled, they were complete, and all was happiness.

When I imagine the end of this world, I imagine a world that ends not through blasphemy but through comfort. They treasured one another’s company so fully that they needed nothing else, and drove themselves towards nothing else. The buildings that men had once imagined were never built. The languages they spoke grew stale, and eventually disappeared, replaced only by shared glances and tender thoughts. Slowly but surely, they forgot to be stewards, and the organization of the universe began to fall apart. God looked down at the world and saw no longer a cohesive thing, but again an assembly of many separate pretty things, and at the shaky center, human things consumed in bliss.

Here is how He destroyed the 103rd world: he cleaved the two-souled bodies into two bodies, unzipping them down the middle. They woke up looking like us, and feeling like us, and no longer able to feel their third arm when their partner decided to move it. With so few limbs they didn’t know how to feed themselves, and having never needed help before, they couldn’t be helped or help one another. Mostly, though, they felt a part of their soul gone. Some took their lives through poison – their first truly self-determined act. Others starved from hunger of the stomach or the heart. And quietly, sadly, that world crumbled away.

And God thought about the things He had found – the creative drive that spurred men on and destroyed them, the love that nourished men and destroyed them – and He created the 104th world, the world we know. Male and female he made them, each of them brilliant, each of them driven, each of them drawing joyfully closer to one another but so thoroughly alone. In their longing for one another, their imaginations grew splendid and their hands made marvelous things. They wanted so badly, they tried so hard, to please the ones they loved – and to please God Himself – and as they came to realize that they never could, they only tried harder. The earth was full of desperate and fruitful cries. And God saw the pain that coursed through them like fire spreading, the crazy things they would do for one another, the temples they would build and the fights they would pick and the music they would write and the mountains they would climb and the loneliness that none of it would wash out. He saw the way their nostrils would flare in anger when they gave something precious of themselves and it was tossed away. Then He looked at Himself, and His own nostrils, and His own 104 created worlds, and the knowledge that there could never be anything like Him, and He smiled. “Finally,” He said, “these creatures are in My image.” And He saw that it was good.