Shouting Down From the Women’s Balcony, a Latter-Day Yentl Discovers That Prayer is Protest

This article originally appeared on The Sisterhood blog on the Forward.

I have always been adamant that my personal prayer was not a protest or a fight for something. Then a recent interaction with a rabbi — me on the women’s balcony, him down below in the men’s section — made me rethink my stance.

Like so many Jews, on Passover my husband and I went to South Florida. We stayed with wonderful friends who so graciously hosted us for the entire chag, the holiday, and enjoyed the sand, sun and, of course, the kosher restaurants. One of the highlights of the location was that there was a Sephardic synagogue (I am Ashkenazi and my husband is Sephardic) at the end of the block. When we arrived for mincha, the afternoon prayers, on Passover, I climbed upstairs to the women’s section, prayed and enjoyed the peace and quiet. To be honest, I had an ulterior motive for going to services: I had heard there was Israeli chocolate spread for the matzo, so I was getting excited for seudat shlitshit, the celebratory meal eaten as the Sabbath closes. I left my Talmud, which I was studying, on my seat and went downstairs.

While looking for my husband, I was told which table is normally set aside for the women. My husband saw the interaction, and when I made eye contact with him I knew he had seen this face before. I’m not a fan of being told where to sit at a meal based on my gender. Eventually, it was clear that there were too many men for the amount of seats set up, and men had to sit at the “women’s table” anyway. My husband moved to the table to join me, and we enjoyed the chocolate together. The rabbi gave a very beautiful talk on the Torah portion of the day, and I was pretty happy to get back upstairs to my Gemara while the rabbi spoke about the laws of Counting the Omer.

The first time my ears perked up from my Gemara was when the rabbi said, “I’m sure there aren’t any Ashkenazim here, but I don’t think they say shehecheyanu [the blessing one says before doing something for the first time] before Sefirat HaOmer.” Three thoughts quickly went through my head. One, there is at least one Ashkenazi person here, even if she’s upstairs! Two, I never remembered saying shehecheyanu before counting the Omer, but there is a lot of counting; maybe we do say it the first night and I forgot. Three, why comment on an Ashkenazi practice if you’re actually not sure. I flipped through my Koren (very Ashkenazi), Shalosh Regalim Machzor, the prayer book for Passover and other major festivals, and didn’t find shehecheyanu, there which confirmed my original thought: Ashkenazim don’t say shehecheyanu before counting the Omer. Okay, whatever. Back to studying the Talmud page of the day.

But then the rabbi changed topics and said, “Maybe you have heard of Women of the Wall. You should be cringing every time you see their faces on the news.” Damn, really, you cringe every time you see my face?! Why did you even bring this up on Passover? Well, he definitely got my full attention. Talmud would have to wait. Even though I could already feel my body getting warm, I calmly closed the book to listen. He explained: These women who go to the Western Wall with tallit and tefillin are provocateurs. Eh,okay, I don’t totally agree, but he didn’t say anything new yet. Then he started going into the laws of why these women shouldn’t be davening, or praying, at the Wall.

“Are women even obligated to daven?” he asked. No one said anything. Really? None of the men downstairs knew the answer? They don’t care? They’ve never thought about it? Silence. So, close your eyes, imagine: I, the lone woman, call down from upstairs, “It’s commonly accepted that women are obligated in at least shacharit [the morning prayer].” Phew. Although I’m not shy, it’s still nerve-racking to draw so much attention to oneself, especially in a situation like this. The rabbi agreed with me, explaining that there are different opinions, but yes, women should be davening shacharit. I scooted to the edge of my seat, closer to the railing, ready for the next question. “Why aren’t women allowed to lay tefillin?” Even though I don’t agree that women aren’t allowed (I personally lay tefillin), after no man seemed to know the answer again, I called down the next answer: “Because it’s a positive, time-bound commandment.” Ah… yes, another right answer. The discussion continued; a man downstairs asked about lulav on Sukkot. Good question; the Talmud asks the same. The rabbi, returning to the topic of tefillin, says that women aren’t obligated. A little more confident now, I yell down, “Not obligated doesn’t mean that something is asur [forbidden].” He agreed, kind of, but then he asked, “Why are tzitzit and tallit asur for women?” Okay, I also know the answer, even though I don’t agree. I yelled down for the last time, exasperated, “Because it’s considered beged ish [men’s clothing].” Yes, of course, he continued with his one-sided discussion of Halachot, or laws. This was not the traditional Jewish approach to study that I’m used to, where different sources and opinions are brought from many generations, allowing the student to think on their own to come to a conclusion about what the rabbis had said.

He concluded by repeating that indeed, we should be cringing not only when we see them but also when we hear about their actions. Great. Was it time for evening prayers yet? Yes, finally we davened. I headed downstairs to meet my husband; he asked if I was ready to go. I said: “Are you kidding? I need to speak with the rabbi!” My poor husband said, “Oy, I was praying that you were studying and not listening, but then you answered all his questions.” I smiled and walked straight into the men’s section, right up to the rabbi.

“Oh, hi, rabbi, chag sameach. Listen, one, Ashkenazim don’t say shehecheyanu before counting the Omer, and secondly, I don’t know who HaShem is playing a joke on, me, you or my husband, or how I ended up in your shul when you decided to speak about this topic, but I want you to know that I lay tefillin and wear a tallit when I daven.” The rabbi stared at me, “

“Yes,” I replied. “I also don’t agree with all the tactics of Women of the Wall, which is why I left their group.” (I am a part of Original Women of the Wall, and actually a plaintiff in a lawsuit against the Israeli government to allow the use of a Torah in the women’s section.) “But you should know when you tell the men here they should be cringing, you’re talking about my face.” My husband added, “Yeah, the pictures are always of her.” The rabbi was shocked; he didn’t know how to respond. Finally, all he said was: “Do you have a rabbi that is mainstream Orthodox? Everyone should have a rabbi.”

“Yes, rabbi, I have quite a few, thanks. Chag sameach.” With that, I walked out. On the way home, my husband said, “I kind of like when you get worked up!” I rolled my eyes and said, “Good thing HaShem buttered me up with the chocolate spread before, or who knows what could have happened!” My husband laughed, but added seriously: “I don’t think people think of someone like you when they think of women who daven at the Western Wall with tallit and tefillin. You study Torah, Gemara [Talmud]… you daven, you don’t fit the stereotype of what people think of these women. So, when people meet you, they have a hard time understanding the sincerity of who you are.” Well, thank you, love of my life, I knew I married you for a reason. My husband is right. I’m not “typical.” I became observant a few years ago while studying full time in Jerusalem at The Pardes Institute of Jewish Studies for three years. I teach rabbinic texts at a Jewish day school in Michigan. I daven, a lot. When I go to the Wall, I daven there how I daven everywhere else. I wear a tallit and lay tefillin. I’ve learned the laws of both many times, with many different rabbis and women who should and, God willing, will one day be able to become rabbis themselves.

So what did I actually learn from the rabbi’s talk? I learned that I really misunderstood parts of Orthodox Judaism, and many of the people who criticize the way I practice. I had always assumed that Orthodox Jews were educated and knew Jewish laws. Maybe this is an obvious statement to others, but this synagogue made me realize there are mass amounts of Orthodox and observant Jews who really don’t know and have never studied Jewish text. They go to synagogue and listen to a rabbi and assume that what he says is all that was ever written on the topic. They aren’t aware of the massive discourse that has taken place on these topics for thousands of years.

As I stated above, I never wanted to think of my prayer practice as fighting something. But now I realize I am fighting when I lay tefillin and don a tallit. I am fighting the ignorance, lack of education and close-mindedness of so many Jews. I personally didn’t need the rabbi to know that I pray this way, but I felt it was important for him to meet s a type of Jew who practices in a way that he has never been exposed to except through the media. I also hope I debunked a few of his stereotypes. Maybe this is wishful thinking, but I hope he thinks before he speaks, and understands that he should be teaching multiple perspectives and approaches. I hope next time the rabbi tells people to cringe about something they see, he’ll educate a little more, share his opinion a little less and let his congregation members come to their own conclusions. 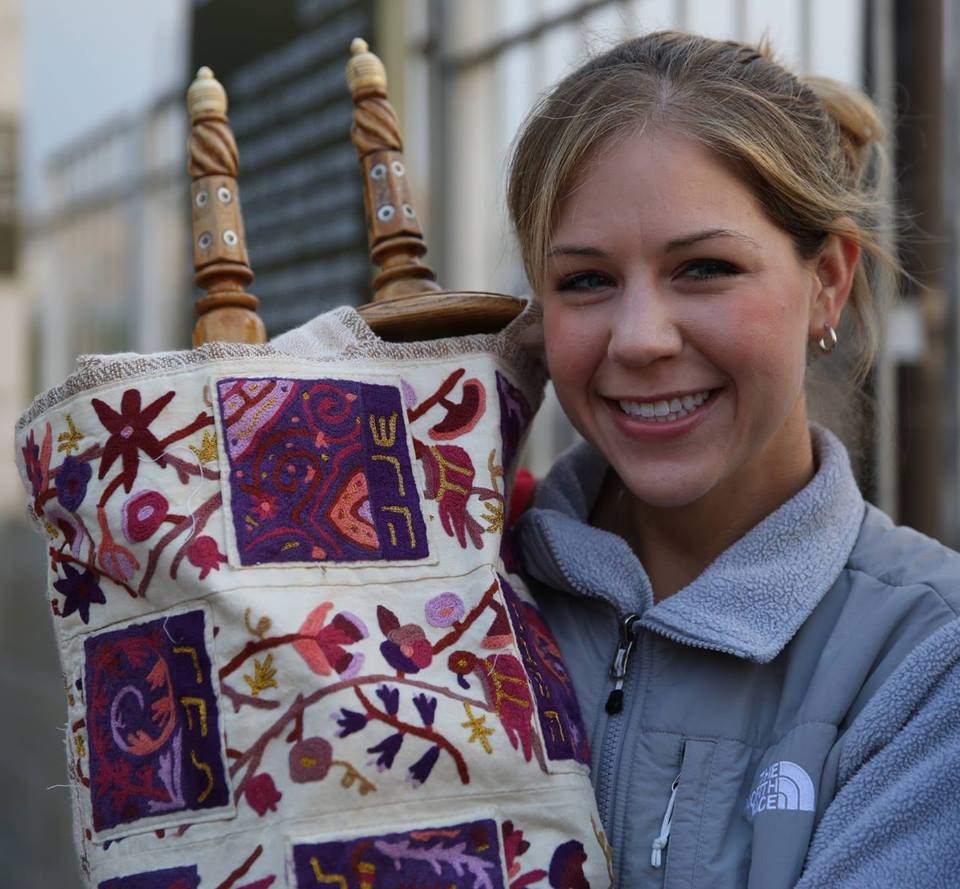