Cain and Abel, Jacob and Esau, Joseph’s enslavement. Reading the stories of Bereshit often makes me wonder what the Torah is trying to tell me about my older brother. Three paradigmatic stories in their own right, all emphasizing the volatile and jealous nature of the brotherly relationship.

Cain murders Abel, all because a jealous God accepted his brother’s offering and not his own. Jacob wrests from Esau both his birthright and his blessing, using his control of the food resources and deception. Joseph’s brothers are jealous of his magnificent coat and the favoritism it represents. They try to kill him, but have to settle with his enslavement.

Though I am skipping most of the nuance of these stories, I hope I have included enough to distill one poignant continuity between these three stories: What seems at first to be jealousy of material wealth is, in fact, a manifestation of angst relating to interpersonal struggles. Esau spurns the birthright after relinquishing it. He seems to be more upset about being manipulated than about losing the actual birthright. Joseph’s brothers care more about what the technicolor coat represents – Jacob’s favoritisms – than the mere fact that Joseph has a nice outfit. Cain and Abel, which establishes the paradigm, has God as the recipient of the object. Since God is infinite and needs nothing, it is obviously not the fact that he needs Abel’s sheep more than he needs Cain’s fruit. Instead, it is the fact that Abel brings the best of his resource and is evidently willing to sacrifice the most, compared with his brother who seems to sacrifice something less subjectively importance. Understanding this principle – that value exists in both the object and the object’s psychological context – is central to understanding the profound moment of Jacob and Esau’s reconciliation.

In Vayishlach, we witness both the fundamental transformation of Jacob and the unprecedented resolution of Jacob and Esau’s painful struggles. For 20 years, Jacob has worked in the land of Haram for Laban. He has gained two wives, children, and immense wealth, by the time he returns. When he does, he is terrified of Esau’s vengeance – פן־יבוא והכני אם על־בנים – “Lest he come and kill mothers and children alike.”

The scene of reconciliation is perhaps the greatest moment of reconciliation between brothers in the Torah. Jacob sees Esau surrounded by 400 men, indicating that Esau’s original intention was likely violent. Jacob bows seven times. וירץ עשו לקראתו ויחבקהו ויפל על־צוארו וישקהו ויבכו. “Esau ran to greet him. He embraced him and, falling on his neck, he kissed him; and they wept.” What lead to Esau’s change of mind? It states many times throughout Esau’s story that he was a man of אדום ‬our sages understand this to mean that he was a man of blood and violence. He is the ancestor of Amalek. Sentimentality, embracing and kissing seem to be fundamentally at odds with his deepest nature.

Though this question invites much thought, I would like to point out a couple textual details that link this story closely with the story of Cain and Abel. After Jacob and Esau embrace, Jacob offers him – even pleads with him to accept – gifts of wealth, animals, and whatever possessions he had amassed. Then Jacob says, “ויאמר יעקב אל־נא אם־נא מצאתי חן בעיניך ולקחת מנחתי מידי כי על־כן ראיתי פניך כראת פני אלהים” Please, Please, if it is pleasing in your eyes, take my offering from my hands, for seeing your face is like seeing the face of God. Wow. This language is so intense that it might make a cynic suspect Jacob is deceivingly placating Esau in order to save his family. However, Jacob then says, “קח־נא את־ברכתי”. “Please, take my blessing.” First, Jacob asks Esau to take his offering. Then he compares Esau to God. Then he asks Esau to accept his gift, but uses a different word than he had been using previously: ברכה. In Jacob and Esau’s story, the blessing and the birthright, בכרת, are intertwined and initially both belonged to Esav. It is possible that this is an allusion to fact that Jacob took from Esau both the rights of the firstborn and the firstborn blessing, and this gift is an attempt to atone for that theft. Additionally, there is something else happening here. The language of מנחה, ברכה, and פני‬ draws us back to our first brother story in Tanakh, in Bereshiet chapter 4.

“In the course of time, Cain brought an offering to the LORD from the fruit of the soil; and Abel, for his part, brought the choicest of the firstlings of his flock. The LORD paid heed to Abel and his offering, but to Cain and his offering He paid no heed. Cain was much distressed and his face fell. And the LORD said to Cain, “Why are you distressed, And why is your face fallen?”

We deduce that God noticed Abel’s offering because, for Abel, it was the greater sacrifice. God needs nothing but our love, and the greater the sacrifice, the greater the offering. The worth of the sacrifice is dependent not only upon the value of the object in itself, but its subjective value to the person who is doing the sacrifice. What Esav experiences is not merely his brother providing him the opportunity to increase his worldly wealth. He sees Jacob, his humiliator, his deceiver, his target of twenty years of rage, humble himself by bowing and sacrificing both his material wealth and his pride for a chance of reconciliation. More than Esau wants wealth, he wants his brother’s humility and apology. Jacob is rewarded in his sacrifice. Esau hunts him no more, and he is able to see in his brother the face of God. Cain failed to learn this lesson, thinking that he could take what he wanted, the approval and love of God, by force. He did not realize that God cares primarily about the internal, and cares about the external world only insofar as it is a manifestation of the internal.

Today, especially in America, there is an obsession with the physical. Materialism dominates the culture. This has pushed many people who conclude that materialism is erosive for the spiritual values toward which they strive. What we see in the story of the reconciliation of Jacob and Esau however, is a more nuanced picture. The Torah does not imagine that an anarchic world where there is no private property is the ideal. It does not vilify material goods as an intrusive obstacle toward knowing God. Rather, if we use them correctly, if we elevate their sparks of holiness into a flame, as the old chassidic teaching says, we can transform them into a path to the transcendental. As the language in the Parshah teaches, our gifts to one another are not merely gifts, they are an offering – a מנכה. Jacob’s reasoning for his actions is, “אכפרה פניו” – To appease him. The root כפר, of course, also means “atone.” He sends the offering acknowledging his error. And if we need more proof that it was the deeper interpersonal message of the gift that mattered most, more than the financial benefit of the gift, Esau at first rejects Jacob’s offering! Jacob must insist a second time that Esau accept his gift. Clearly, this is not a story in which Esau is simply appeased by his newly gained livestock. He says, “I have enough my brother. Let what is yours be yours.” Rashi brings Genesis Rabbah 78:11 which says that here Esau is also admitting Jacob’s right to the blessings as well.

There is something warm and loving about this language too. Perhaps this is our first instance in the Torah of brotherly love and brotherly affection.

The things of this world are connected to a vast emotional and historical network. To understand their meaning is to understand their history. And to understand their history and their meaning is to know their power. This has serious implications for how we look at our relationship to material objects as they relate to both ourselves and our close relations. Though we interface with this world on the level of the physical, let us never forget that all meaning is derived from the divine. If we are to make peace between warring peoples, we must follow in the footsteps of our patriarch Jacob and pierce the veil of arrogance and pride to see the face of God in the other. 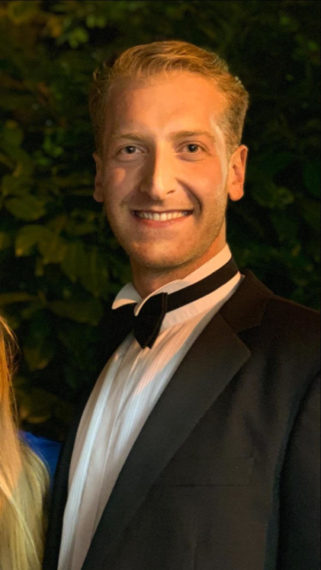