I love living in Jerusalem, surrounded by my fellow Pardesnikim, all of whom—in addition to being generally lovely people—share my deep commitment to spending our days in the Beit Midrash, translating texts and debating over the latest tractate of Mishna or Talmud, who love to discuss the weekly Torah portion even as they munch on their lunchtime falafels. Living and being in community with these folks enriches my learning and life in innumerable ways…but we’re admittedly a self-selecting crowd. Despite our diversity as a community—that we come from different countries and different backgrounds, that we have different Jewish practices, and even different understandings of what Torah is and why it’s important—we’ve all dedicated this moment of our lives to full-time Torah study, and that can create a bit of a bubble.

Sometimes, it’s easy to forget that the rest of Israel doesn’t necessarily also all live in the Beit Midrash. And that’s why I’m so grateful that part of the Pardes program includes tiyulim—trips that take us out of the Beit Midrash and out of Jerusalem, enabling us, every once in a while, to pop that bubble.   And our recent Modern Israel seminar was an especially good example of this, in that we met with and learned from three non-Jewish communities in Israel. On this trip, we traveled North from Jerusalem to the Haifa area—which, we learned on the trip is one of the most diverse cities in Israel—and spent time with the Druze community in a nearby village, glimpsed the gardens of the Bahá’í Shrine of Bab, and spoke with members of the Ahmadi Muslim community in their mosque on Mount Carmel.

We first visited a Druze village nearby Haifa, where a member of the community met us and gave us a tour of the village, explaining the basics of the Druze faith to us. That Druze people believe that God defies any sort of human attributes or personification, that they believe that every human soul reincarnates after death, and that there are five major prophets who retain memories of their past lives and have in every generation striven to help humanity understand the divine, and that the reincarnations of these prophets include the likes of Yitro (Jethro) and Aristotle. 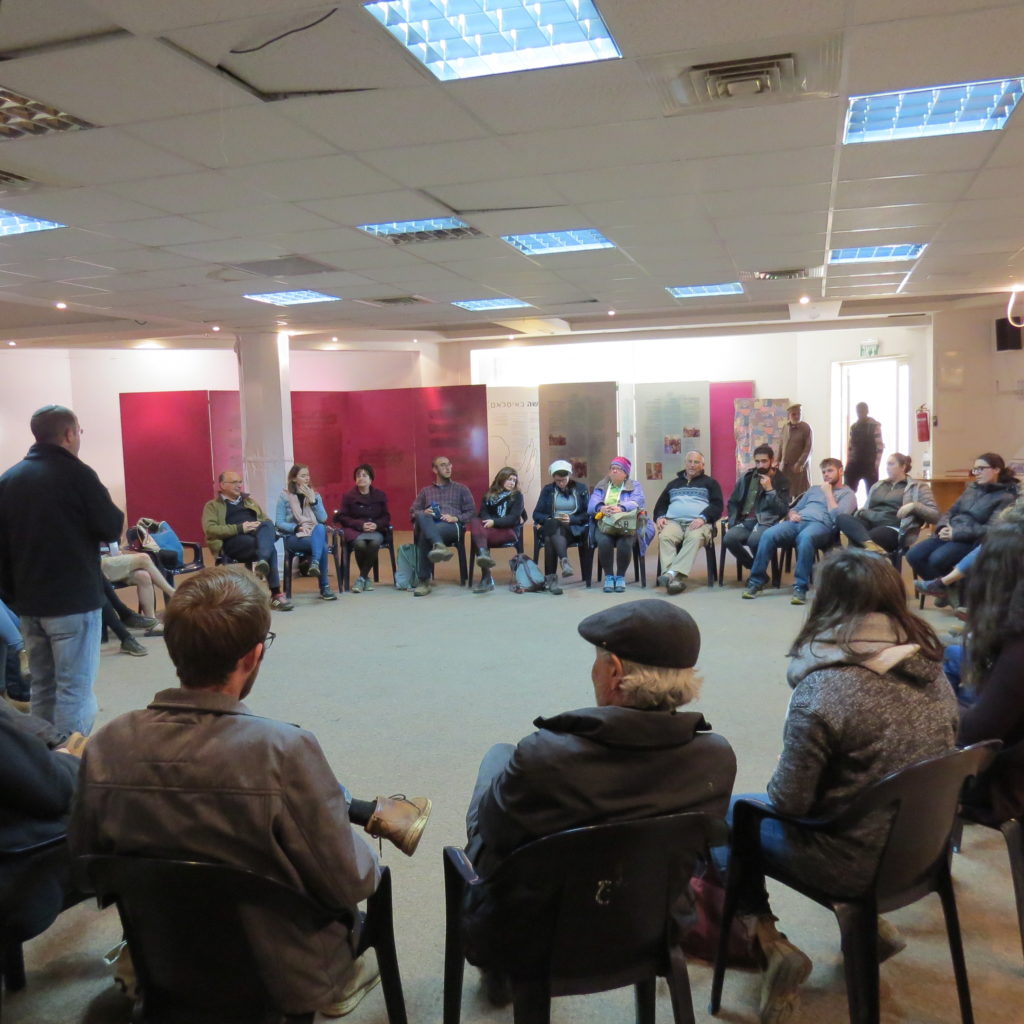 As our guide elucidated all this to us, we stood outside the Druze prayer space, a nonchalant building, indistinguishable from the rest of the village aside from an ornate gate. Our guide explained to us that, in the Druze religion, there is nothing inherently sacred about any one space, including prayer spaces. But that, because the Druze texts are secret, only initiated members of the religion were allowed inside. Despite having heard a lot about the Druze people from political and sociological perspectives, this was the first time I ever learned about their religion…and the first time I actually heard about the Druze community from a member of that community, and I am so grateful to have been able to do so.

On our way into Haifa proper, we stopped by the Bahá’í gardens outside the Bahá’í shrine on Mount Carmel. If the Druze believe that prayer spaces should be nonchalant, the Bahá’í take the opposite approach, furnishing their holy places with ornate gardens draping down the side of the mountain. Access to the shrine itself—where Ba, the founder of the Bahá’í religion is buried—is extremely limited, so we weren’t able to go inside, but standing in the outer gardens, gazing at it past all the beautiful grass and trees, was enough to engender a sense of awe. 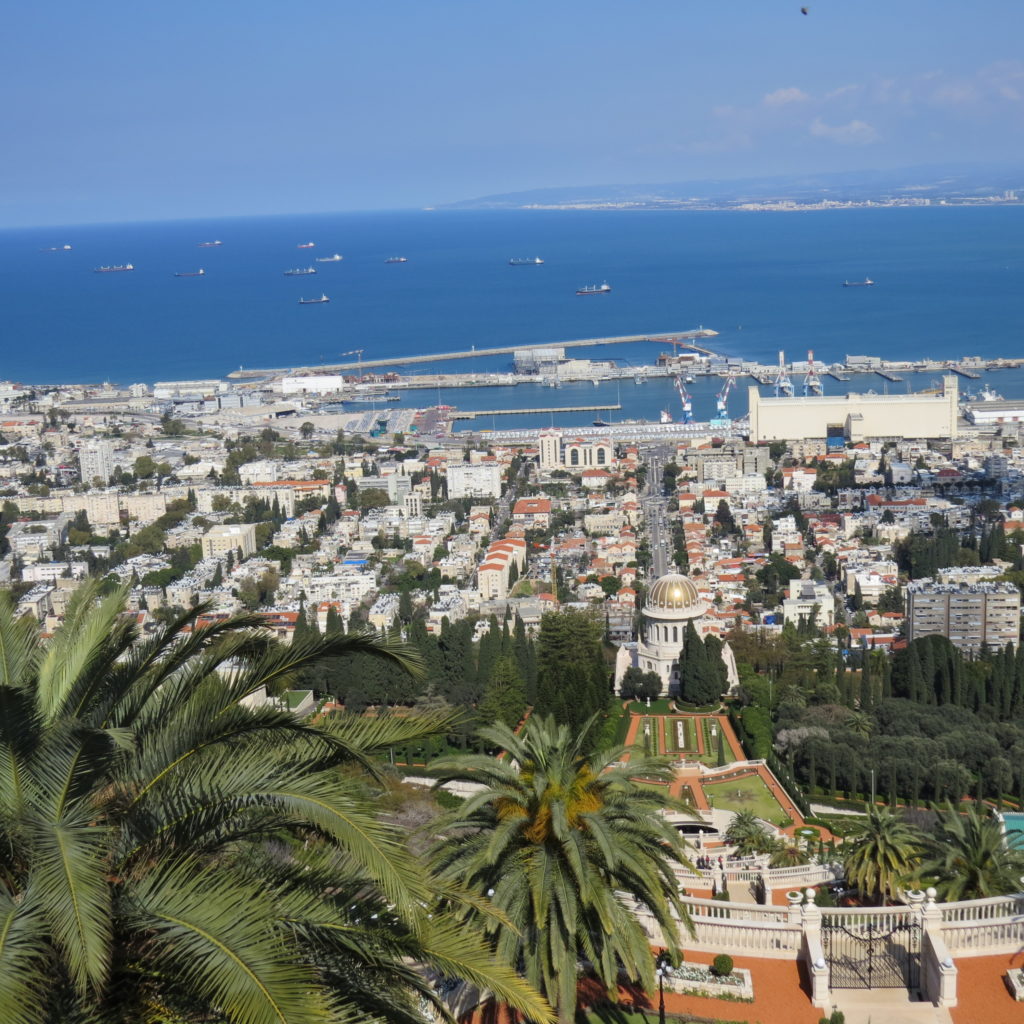 Finally, as we left the city, the Ahmadi Muslim community welcomed us into one of their Mahmood Mosque—a brilliant white building, also on Mount Carmel, whose large minarets are perhaps the most prominent feature of the Haifa skyline. An elder of the community sat with us inside, and explained that the Ahmadiyya movement only consists of hundred million people—small, relative to the rest of the Muslim world—and was founded in Punjab, now part of Pakistan, in the 1890s. In 1900, missionaries began to bring the messages of the movement’s founder, Mirza Ghulam Ahmad—who the Ahmadi believe to be a Messianic figure—to the rest of the Muslim world and beyond. The movement believes in outreach through accessibility and has made it their mission to translate key verses from the Quran into as many languages as possible—including, I was surprised to learn, Yiddish!—and distribute them for free as widely as possible. I was personally humbled to hear about the challenges the community faces in the Muslim world, including that the Saudi authorities often prohibit them from making Hajj, the annual Muslim pilgrimage to the city of Mecca, which Islam considers holy. It was a thought-provoking glimpse into a community about which I don’t think I otherwise would have learned, and I feel enriched for having done so.

On the whole, the seminar was a wonderful reminder that there is so much more to Israel than is contained within the walls of our Beit Midrash, and that there are many more communities in Israel than Jewish ones. And, in addition to this being an important idea to hold, it also, I think, affords me the opportunity to feel and experience my Judaism, my Jewishness, and the Torah I’m learning in a new way. Just as the diversity of the Padres community—that I learn with and from and in conversation with people different than me with views that are different than mine—helps me clarify and articulate what my own stances are, so too does engaging deeply with people outside out our community help me understand better who I am within my own community.