Two weeks ago, my grandfather passed away.  He had been ill for a long time, and it was not a sudden death, but it has been nonetheless a difficult experience.  At his funeral, my uncle shared a story about my grandfather that has become something of a mantra for me in the last few weeks:

“My last conversation with him was two weeks ago.  I went to him and he gave me a kiss and hug and a brilliant smile.  And then he said to me, “Bob, I have to talk to you about the garbage.”  I said, “Dad, the garbage??”  And he said, “Yes, the garbage!”  Then he raised his hands, and got a rueful expression on his face, with a little smile.  “It is not our garbage, but it has fallen upon us to take care of it…” and he pointed to himself, “so I am going to send your mother out for the supplies, and later, we will take care of it.”

This was my father, Max Singer.  He knew there was garbage in the world.  It did not matter to him that it was someone else’s garbage.  He felt a responsibility anyway, and willingly took on the obligation to heal the world without complaint, without objection, with equanimity and grace.  He wanted to help without fanfare, and he did the right thing because it needed to be done.”

By now, hopefully all of you have heard about what happened with the Women of the Wall at the Kotel last Wednesday (in case you haven’t, I wrote a blog post about it here).  The short version of the story is that a woman named Nofrat Frenkel was arrested for wearing a tallit and holding a sefer Torah, and is now under investigation, with criminal charges pending.  If convicted, she faces up to six months in prison and a 10,000 NIS fine, as well as serious repercussions to her future medical career.

The (slightly) longer version is this.  On Wednesday morning, I woke up early and got into a cab with several other Pardes students.  We arrived at the Kotel bright and early to join the Women of the Wall in their Rosh Chodesh prayers.  After twenty years of fighting for equality at the Kotel, the Women of the Wall have been granted the right to gather for one hour each month to pray in a group, as long as they adhere to the “customs” of the wall.  I arrived at the Wall with my friends expecting verbal abuse and potential physical abuse, however, we prayed our morning service completely under the radar of the people around us.

Because of this success, we decided to attempt to read Torah at the Wall, rather than to relocate to Robinson’s Arch, as is the usual Women of the Wall practice.  What seemed like a beautiful, successful morning quickly soured and was desecrated by shouting and threats from assorted officers, culminating in the arrest of Nofrat Frenkel, our shaliach tzibur (prayer leader), who also happened to be visibly wrapped in a tallit and holding a Torah when we were joined by a police officer.

There are several articles discussing these events, my own blog included, and each one of them talks about a different thing.  Some of them focus on the history, others focus on whether Nofrat was practicing her religion or making a political 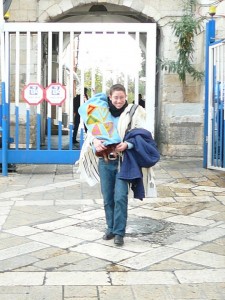 statement.  There are articles that talk about Robinson’s Arch as a perfect substitute for the Kotel, and articles that quote the Chief Rabbi of the Kotel as saying that “They behaved like [biblical] Korach and his assembly.”

What I struggle with is what comes next.  With December will come another Rosh Chodesh, and another meeting of the Women of the Wall.  What will we find, when we arrive at the Kotel on December 18th?  Will I be brave enough this time to wrap my tallit outside of my jacket, as opposed to under it, as I was instructed to do last Wednesday?  Will I, too, be brave enough to stand up in the face of angry, powerful men and respond to questions about my tallit by saying “I wear it because it’s a mitzvah.  Where is yours?”

My second story starts in a similar fashion – I woke up (considerably later, this time around), and met two of my friends on the corner of Derech Hevron and Ein Gedi, where we got on the 21 bus to Bethlehem.  We had been invited to spend Shabbat with another friend of mine, and I for one had leapt at the chance to visit.  It was my first trip to the West Bank, and therefore my first trip through a checkpoint, and my first chance to examine Israel’s second famous wall.

In my head and when I speak, the security barrier is always referred to as The Wall – capitalized and bolded for emphasis.  I remember learning about the fence as a teenager in a Young Judaea program, when construction had first begun in earnest, and spending two hours arguing about why it was being constructed and what we should call it.  The terminology seemed incredibly important to me at the time, and it still does – you’ll notice I’ve called it three different things in two sentences, and each title carries a different weight and connotation.

You can read and talk about life in the West Bank until you’re blue in the face, but you’ll never understand what it’s actually like until you travel there yourself, and even then you will only understand a fraction of what there is to understand.  The same goes for seeing the wall – it’s easy to sit in my comfortable Jerusalem apartment and argue about the benefits of a security barrier vs. the flaws of a security system that creates and maintains human rights violations every day, and an entirely different one to see the benefit of a physical wall that separates families from their land, cities from civilization, and human beings from control over their own lives.

The first thing I noticed about the wall was the graffiti – it’s difficult to notice anything else, because it’s so bountiful and beautiful and powerful.  Some of it is professional, some of it is casual, but all of it means something.  I took picture 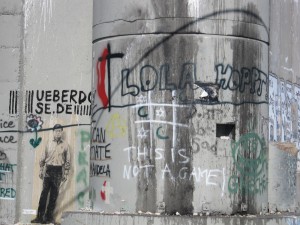 after picture; if I could capture the entire thing I would, and I hope that someone in the world is taking on the project of documenting the artwork.  This is the first picture I took, of a tic-tac-toe board and the words “this is not a game.”  The image brings to mind a lot of things – the futility of the struggle between Israelis and Palestinians, the recognition that the wall has a serious impact on the people on either side, and in one of the more petty parts of my brain, the movie War Games. 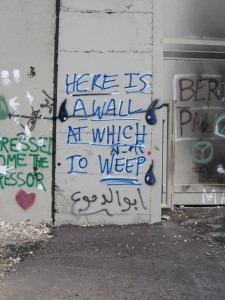 Bethlehem and the Kotel that I visited last week snapped in to focus.

These are walls with multiple meanings.  On the one hand, they are about safety and protection – safeguarding a people, protecting a religion.  But on the other hand, they are about power – they are about showing the world who is in charge, and who holds the upper hand.  And it is that part – the usage of these walls as methods of control – that I simply cannot stand for.  How can I live in a country that does not support my right to pray the way that I choose, in what many consider the holiest part of the holiest city in the world?  And how can I love a country where the government is allowed to illegally seize land by building an impenetrable barrier between itself and some of its citizens?

I live here because this is where Jews are meant to live.  For all of my doubts about whether or not the Kotel is a place I want to pray, and for all of my frustrations with the actions of the Israeli government, I live here in this place because it is the land of my family and my people and my ancestors.  But I refuse to simply live here and accept the status quo.  This Israel, that protects men who verbally and physically abuse women who simply wish to pray in the holiest fashion they know, can never be my Israel.  This Israel, which builds walls to protect itself and in the process commits human rights violations, is not a country I am proud of.

It would be easy to simply leave.  To make a phone call and change my plane ticket and go back to a part of the world where things make relative amounts of sense, and the problems that need to be dealt with are problems that I feel I have at least a chance of solving.  But Israel means too much to me to do that.  And so, next Friday, I will travel to Hebron on a Breaking the Silence trip, to learn about the culture of silence surrounding military corruption in Israel.  And on December 18th, Rosh Chodesh Tevet, I will go back to the Kotel with the Women of the Wall, and I will pray wrapped in a tallit as I believe I am commanded to do.  It’s time.  I am cleaning up the garbage.