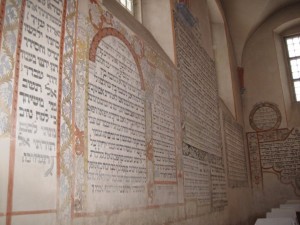 There’s a stunning, old shul (synagogue) in Tikocyn, Poland. It’s made of stone so it remains standing… the wooden synagogues of Polish yesteryear are no longer. The shul currently serves as a museum; the prayers painted upon its walls have been redone by Poles who traced the faded, unfamiliar letters (and made some errors in the process). Second in size only to the Tikocyn church (due to Polish law), beautifully constructed and decorated, the shul stands as a testament to the community’s central commitment to Yiddishkeit. Its exterior is simple, but the walls and furnishings of its interior beckon the curious mind; we explored it, we studied it, and we prayed within it… this was the first shul that we visited in Poland, and it made an impression.
We often speak of numbers lost during the Shoah, but so much more was lost to us during those dark years of Nazi destruction and murder. The Jewish community of Tikocyn had been thriving; the shul had been used, maintained and respected for several hundred years by thousands of Jews before… My stomach tightens even at writing these words. 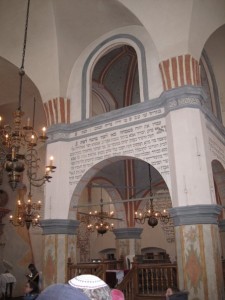 Tikocyn was our first stop in Poland. We stood in the Jewish marketplace, visited the shul, and then walked towards the larger market area with the Tikocyn church standing prominently at its far end.

That’s when R. Cooper began to read a witness’ account of the Einsatzgruppen’s methodical slaughtering of the Jews of Tikocyn. The Nazis had gathered the entire Jewish community together in the large marketplace… leading them to believe that they would be transported to labor camps. The Jews wore multiple layers of clothing, despite the summer heat… the Nazis had them sign in, feigning that they were being gathered for “peaceful” purposes.

Our experience in Poland was greatly colored by the frigid weather. Upon seeing the photos from our tiyul, a Polish friend of mine at Pardes joking told me that we hadn’t actually been to Poland at all… apparently our plane had actually landed in Siberia.While R. Cooper told us that Tikocyn massacre took place during the summer, I could only see the town and surrounding forests under their winter blanket. The chill of the snow spread throughout the storyline. 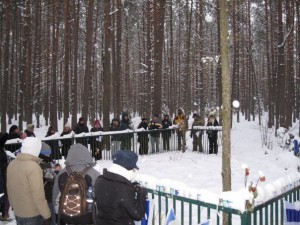 We traveled from Tikocyn to the nearby Forest of Lopohova where the Einsatzgruppen had had three massive pits dug, waiting for the Jewish victims who were lined up, shot, and thrown into the graves… regardless of whether or not they’d been killed by the bullets. Blood spurted from the ground, and some of the wounded victims tried to climb up through the bodies, choking, gasping to breathe in the air and survive.

I registered the number of pits somewhere at the back of my mind, but I wasn’t really paying attention, as I trudged through the snow into the forest. Everything was white, and a misstep would leave me ankle-deep in snow… I followed closely after the person in front of me, watching my steps. We arrived at a fenced off field, a mass grave, and R. Cooper continued with his narrative.

Hundreds of murdered Jews lay buried dead before me.

At a certain point, R. Cooper finished his story, and several members of our group began a nigun in commemoration of the lost Tikocyn Jewish community. Unready to sing after witnessing this, I backed away from the group, and looked around at the forest. To my left, I noticed… another fenced off field. A voice at the back of my mind spoke up, “R. Cooper said there was more than one mass grave…” 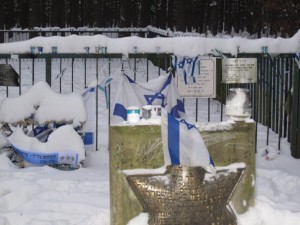 Numbly, I walked through the snow towards it.

I examined the fence and commemorative markers left at the grave by other visitors, walking around the 2nd pit until I noticed that the group had finished its nigun, and was making its way towards me. Again, I backed away through the snow, and looked around to take in the winter forest. Again, through the snow, I noticed… another fenced off field. The voice at the back of my mind spoke up again, “R. Cooper said there were three mass graves…”

I walked towards the 3rd covered mass grave, thinking… feeling… nothing. I couldn’t really process this; the idea of hundreds of Jews lying dead, twisted in a single, fenced off, snow-covered mass grave was disgusting, terrible… unbelievable… dehumanizing. The idea of two further pits filled with hundreds more twisted, tortured Jewish corpses didn’t quite register. How much more could I (should I) feel at visiting three mass graves than one?