It’s not often that I find myself able to unequivocally utter these words.  But every once and a while, a day comes along that is so good that there is nothing left to say.

Today was a good day because it was the second day of Rosh Chodesh Adar – I happen to be a huge fan of Rosh Chodesh celebrations, and Pardes has particularly lovely ones.  I chose to spend my morning at the Kotel, celebrating Rosh Chodesh with the Women of the Wall. My experiences with Women of the Wall have been mixed, and I have talked about them before, but a few things happened this morning that I want to highlight.  There was a very large group of women today – larger than I’ve ever seen before – and on top of that, there was a large group of men davening with us; they stood behind the women’s section of the prayer plaza in the main Kotel plaza.  The police, who have been so antagonistic in my prior Women of the Wall experiences, formed a barrier in front of us today to protect us from a group of Haredi women who were shouting at us (incidentally, one of the women who shouted at us kept saying “if your mother knew where you were!!!!”  I really wanted to tell her that my mother knew exactly where I was, and that if she had been in the country, she would probably have been standing right next to me).  Looking around me this morning, I was able to see the growth of Women of the Wall, and also to have a little bit of hope that things may get better.

Today was a good day because it was a beautiful day.  In an absolute miracle of weather and in defiance of everything I know about the month of February, the sun came out today and it was glorious – 80 degree weather, a beautiful breeze, sun shining down over the city.  I opened every single window in my apartment this afternoon and did my best to let the sunshine in.  I walked with a friend from the Kotel back to Pardes, where we arrived just in time for community breakfast, and a skit from some of our fellow students in the Pardes Educators Program.  We sang and laughed in celebration of the onset of Adar and the coming of Purim, and we enjoyed a wonderful meal.

Today was a good day because it was the 8th annual Pardes Yom Iyun Shel Chesed, in honor of Ben Blutstein and Marla Bennet, z”l.  Ben and Marla, students in the Pardes Educators Program, were both killed in the July, 2002 bombing at Hebrew University.  I don’t know very much about Ben or Marla – but what I have learned in the past few weeks has given me a picture of two wonderful people that the world is incredibly unfortunate to have lost.  After the bombing, the  Pardes community entered a year of mourning, a process which eventually produced the annual Yom Iyun Shel Chesed.  Every year, Pardes students are asked to spend one day devoted to bringing a little bit more chesed, or kindness, into the world.  We spent our morning studying in honor of Ben and Marla, and then spent our afternoons out in the world, doing various beautiful deeds.  A large group of students volunteered harvesting oranges for Leket, another group volunteered for Save a Child’s Heart, we ran a Gift of Life bone marrow donor registration drive, and more. 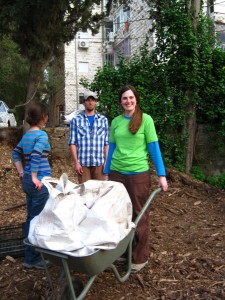 Gan HaHursha.  Spending today, such a beautiful day, with my fingers in the dirt and my lungs full of fresh air, was incredibly refreshing.  We moved mulch and compost, helped fix stone borders, and pulled weeds.  For me, this was familiar work – my family has had a vegetable garden for as long as I can remember, and I’ve been moving mulch since I was old enough to hold a big shovel.  The sites and sounds and the rhythm of the work all felt like home.

Seeing a community so engaged in social justice on behalf of the memory of two people that most of us never knew was very emotional to me.  It was obvious from the first time we heard about the Yom Iyun Shel Chesed that it was an important Pardes tradition, but it wasn’t until this morning, when I heard my fellow students speak about Ben and Marla, and this afternoon, when I saw my friends swabbing their cheeks in order to register as bone marrow donors, and moving mulch to beautify a garden that will only be our community garden for another few months, that I was able to see how fully the community embraced the idea of chesed, and giving back. 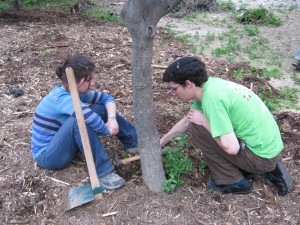 It was a very moving thing to see, and left me feeling full of pride towards the Pardes community.

Today was a good day.