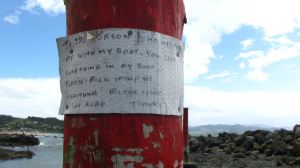 this week’s parsha entitled mishpatim translates to law in english.  and this parsha is aptly titled as the bulk of the parsha is a long, long list of rules that it is quite easy to get lost in.  topics covered include but are not limited to goring oxes, tunneling thieves, uncovered pits, and virgin-seducers.  but, in the midst of this stacking of procedural laws, is a commandment to think outside our own experiences.

we are instructed twice not to “wrong a stranger or oppress him, for you were strangers in the land of egypt” (shmot 22.20).  twenty verses later, we receive the same rule a second time, but this time with the added “וידעתם את-נפש הגר, for you know the feelings of the stranger” (shmot 23:9).   if the first time is a command not to the oppress the stranger, the second time, it is a command not only to not oppress, but to understand and to identify with.  the Torah again stresses the need for empathy discussing what to do when a poor man gives you his sole shirt as a pledge.  the Torah instructs that the shirt must be returned before nightfall, directly asking the reader, “במה ישכב?” (shmot 22.26).

i am struck by the simplicity of the question.  in a list of endless rules that i find difficult to distinguish one from the next, the Torah stops me, and turns to me, and asks me to really imagine and understand another’s difficulty.  it is not enough to simply execute God’s commands in rigidity, but rather we must live according to halacha and mitzvot with compassion and sensitivity to the world around us.

you are commanded
to empathize:  ask yourself,
in what will he sleep?

may we step outside ourselves for a moment in order to better understand each other,