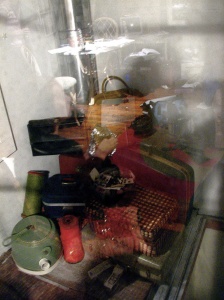 when i first read this week’s parsha, in which the תרומה (gifts offered to God) and the building of the משכן (tabernacle) is detailed, i experienced a sense of de-ja-vue in their descriptions.  i thought, i’ve literally just read all of these same words about how the skilled should offer their services, these vessels will be made of these materials, and so-and-so will be perfect for this job.  and yet, here it is again, repeated in many places word for word.

and then i realized that the first time all of this construction was detailed (think back several parshiot) God was just instructing moshe about the building.  but as of yet, moshe has yet to communicate all of these detailed instructions to bnei yisrael.  not only that, a significant amount of time has passed since God instructed moshe in the construction until now, when moshe calls the people to action.  moshe’s been on the mountain for forty days, he came down, the people worshipped a golden calf, he broke the tablets, he stayed around for a bit, he went back up, he came back down.  and only now, many pages later, is he actually putting God’s vision of the משכן (tabernacle) into action.

what’s with the delay?  and why now does moshe feel bnei yisrael are ready to receive God’s message?   up until now, even though we had received God’s laws and even agreed to follow them, we had not yet come together fully as a people.  it is only after the sin of the golden calf and our communal grieving that follows, that we come together as a community, united in our shared experience of sorrow and regret.

while the incident of the golden calf stays with us as a reminder of a time when we lacked faith, it is this very event that binds us together.  in this week’s parsha, when moshe finally does call the people to action, bnei yisrael steps up to the task with an outpouring of service, generosity, and love towards God.  so great are the people’s efforts and so many are their gifts that moshe finallys proclaims,”איש ואישה אל–יעשו–עוד מלאכה לתרומת הקדש, Let no man or women make further effort toward gifts for the sanctuary!” (jps translation, shmot 36:6).  moshe knew to bide his time until the moment when the people would come together, finally united in a commitment towards God.

i have been waiting,
keeping His words to myself.
but now, you’re ready.

may we come together as a community as bnei yisrael came together to build the משכן,