(More Than) a Week Later 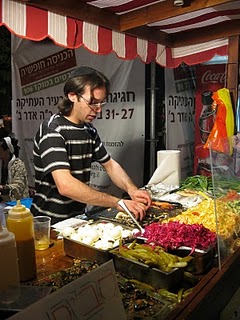 Over a week ago, Jerusalem was struck with the blight of terrorism once again. I am not going to spend time or words rehashing the events, as they are no doubt well known by now. However, in the 10 days since the most recent act of terror perpetrated against Israel, we have continued to live our lives.

On the evening following the attack, buses were crowded, and lines to the most popular restaurants were out the door. Vigilance is significantly higher, but life has gone on as normal. Last Friday, huge swathes of the city were shut down because of the first ever Jerusalem Marathon. Teens mobbed Ben Yehuda street last Saturday night, enjoying the evening with friends. As the weather warms, cafes are seating customers outdoors. All this week, the first annual Taste of the Old City (above) was held. Food, music, live music, and happiness was abound. Security was tight, and very visible, but people moved about undeterred.

Israel has weathered last week’s attack. Over the past week, I can’t help but say with relative confidence that terrorism will not solve any of the region’s problems, nor will it ultimately win.