Again, it’s been too long since my last post.  I’ve been studying hard at Pardes, and not much has changed.  But finally, Spring is here!  And with that, the first dig season of the year.

Some friends of mine from the Tell es-Safi/Gath Archaeological Project, Drs Itzik Shai and Joe Uziel, have started up their own excavation at Tel Burna, a Judahite city just up the road from Safi.  The tel was occupied in the Early, Middle and Late Bronze Ages (as a Canaanite city), and was settled in the Iron Age as a Judahite fortress city (likely Biblical Libna, home town of Josiah’s wife Hamutal- cf. 2Kings 24:18).  Its strategic position in the Shephelah, particularly its view over much of the Philistines’ territory, makes it an especially useful site to study Philistine/Judahite cross-border interactions during Judah’s monarchic period.  After its abandonment towards the end of the Iron Age (near the end of the destruction of the Kingdom of Judah), it lay largely unsettled, meaning that the Iron Age remains are undisturbed by later periods (unlike at most other sites).  Needless to say, I was very excited to get the chance to dig here!

This is a pic of me from the Dig Blog: 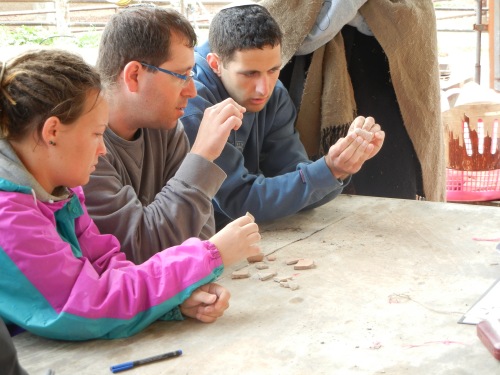 Me at the Dig (on the right)

The dig was, for the most part, composed of two groups: IBEX (International Bible Expedition?), a study abroad program for The Master’s College in CA; and a group of teenage Israelis on a mechina year between high school and army service, in which they take classes for fun and go on trips (such as archaeological digs).  Because both groups had their own accommodations, the rest of us commuted to the tell from home every day.

Being able to drive to the site every day (about a 45 minute ride), was wonderful at this time of year.  The road descends down from Jerusalem through the dramatic Judaean Hills, over tell Beit Shemesh (where the ark was brought after its stay in Philistia), through the Elah Valley (site of David’s battle with Goliath), and across to the edge of the Shephelah.  Having been in this area only during the summer, it was incredible to see the difference.  The whole way down was through lush, rolling green hills, and through bright green forests, not the dusty brown forests of the summer.  The hills are covered in yellow and red flowers, and are completely unrecognizable from when I had last seen them.

The difference on site was just as striking.  During the summer, digging without shade is horrible, if not dangerous.  Last week, we had no need for shade, since the temperatures didn’t get above the mid 70s.  It was the most pleasant time I have ever spent digging in Israel.

While the majority of the work took place on top of the tel in the Iron Age fortress, I was placed with another friend from Safi, Chris McKinney, in the presumed Late Bronze lower city.  The area had not been opened, so we spent the first couple days opening three new squares.  It took until the end of the first week before we found architecture, but we came up with a number of finds in the process.  Most interesting were two broken ceramic masks (see here for a picture).  While we didn’t come up with many answers for the area, we set the stage for great finds this summer.

Week two, I discovered the downside of digging in the spring.  Starting Monday, a huge rainstorm hit Israel, making it impossible to dig for the rest of the week.  So instead, we took that time to wash and read pottery (picture), which made a nice dent in the work for the summer.

After having been inside studying for the last couple months, it was great to be out in the field again.  We got a good week’s head start on the summer season, which I am really looking forward to.  If anyone is interested in the site (or in joining us this summer!), here is the blog.  I leave for Prague and Dresden tonight, so hopefully I’ll have an update up at the end of next week!