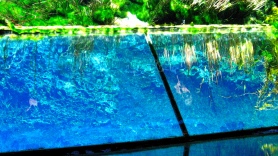 this parsha is one that sits heavy with death.  for one thing, early on, we get the description of what to do when one comes in contact with a dead body.  and then, as if the Torah was simply giving us the procedure in order to prepare us for what’s to come, we learn of the sudden death of miriam.  the Torah simply writes, “ותמת מרים ותקבר שם, miriam died and was buried there” (bamidbar 20:1).  miriam’s death coincides with a severe water drought, leading the people to once again bewail their awful fate in the desert, preferring to perish with those who have already died rather than continue to live on the brink of death.

with all the action focused on the drought, we quickly move on from miriam’s death to the infamous story of moshe and the rock.  God orders moshe to command the rock to produce water and instead moshe strikes the rock twice.  hard.  the good news: copious amounts of water flows forth.  the bad news:  God punishes moshe’s lack of faith and forbids him to enter the promised land.

just a short while later, same parsha, we find out that aharon dies.  however, here, both the telling and experience of death is totally different from the way in which we experience miriam’s.  the Torah writes, “the whole community knew that aharon had breathed his last.  all the house of israel bewailed aharon thirty days” (numbers 20:29).  while moshe and eleazar accompany aharon to the top of mount hor to be buried, the rest of the community waits at the bottom, mourning the loss of their great leader.

i am struck by the disparity in how moshe and the people experience these two deaths, both siblings of moshe, both leaders of the community.  the only way i can make sense of this seeming injustice is to look towards midrash.

i want to suggest that with miriam’s death, the community was overwhelmed with a water crisis so great that the immediacy of mourning had to be pushed aside in order to address the emergency before them.  however, when we push aside feelings of grief or anger, they don’t just disappear.  we can’t just not mourn someone, simply because it’s inconvenient.  rather, these feelings manifest themselves in unsuspected places, perhaps in inappropriate moments.

for moshe, this manifestation of grief occurs when he struck out against the rock.  it wasn’t some crisis of faith in God that caused him to strike the rock rather than command it.  but rather, we see a picture of a man, grieving, overburdened, and struggling to keep himself and a people together, in the face of the death before them.

may we find the time and the space we need to process through our loss,