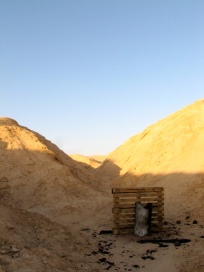 this week’s parsha strangely focus on the story of one non-israelite, balaam the diviner, and his journey of how he came to know and understand God.   okay, let’s back up a little bit.

there’s a bad guy in this story, balak, head of the amorites, who summons our diviner-friend balaam to curse the jewish people in order to drive them out from the land.  balaam, a smart, savvy diviner, first seeks God’s consult before agreeing to interfere with His people.  God appears before him, granting him permission to continue on with his talks with balak, providing that he wait for God’s advice and only transmit His word.

but, there’s a catch.  balaam has to wait for God’s word.  for some reason, God is holding back on him and will only reveal the message at some later time.  twice, in order to seek God, balaam builds an altar, offers up a sacrifice, and sure enough, receives God’s word revealing that balaam is indeed rather to bless the israelites rather than curse them as balak demands.  both times, the Torah specifies that balaam builds the altar from a vantage point from which he can see only a portion of the israelites.

the third time, balaam has now become wise to God’s will.  this time, the Torah writes, “ולא הלך כפעם-בפעם לקראת נחשים וישת אל המדבר פניו, he did not, as on previous occasions, go in search of omens, but turned his face toward the wilderness” (bamidbar 24:1).  and this time, the Torah writes, the spirit of God comes upon him and not only that, he sees each and every tribe of israel.  God and the jewish people are revealed in their entirety.

what’s the key to this complete revelation?  balaam stopping looking so hard, he stopping trying to find the sign, the proof, the word of God in every moment.  it was only when he completely opened himself up to the wilderness, the vast emptiness and all-encompassing desert, that the message of God finally rang through loud and clear.

there’s no question that we have to do some seeking on our part in order to bring ourselves closer to God.  but, perhaps, sometimes, the very act of trying so hard, of looking for something in everything, is the very act that prevents us from opening to His presence and creating space for that revelation in our lives.

it’s about giving in.
the white noise grows in volume
’til His voice is heard.

may we make meaning of the noise,

ps.  check out this beautiful text from the little prince, written by Antoine de Saint-Exupéry, in which the desert reveals hidden wonders.

“The desert is beautiful,” the little prince added.

And that was true. I have always loved the desert. One sits down on a desert sand dune, sees nothing, hears nothing. Yet through the silence something throbs, and gleams…

“What makes the desert beautiful,” said the little prince, “is that somewhere it hides a well…”

I was astonished by a sudden understanding of that mysterious radiation of the sands. When I was a little boy I lived in an old house, and legend told us that a treasure was buried there. To be sure, no one had ever known how to find it; perhaps no one had ever even looked for it. But it cast an enchantment over that house. My home was hiding a secret in the depths of its heart…

“Yes,” I said to the little prince. “The house, the stars, the desert– what gives them their beauty is something that is invisible!”