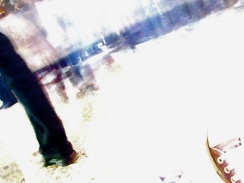 Those who Once Were

in this week’s parsha, after yet another plague in which an empassioned God wipes out large numbers of israelities, 24,000 to be exact, God tells moshe to take another census of the jewish people.  the last census was back in the beginning of parshat bamidbar, where we reached a grand total of 603,550 israelites.  and now, after several huge displays of God’s passion, resulting in mass losses of jewish lives, (think back to the sin of the golden calf, those rebellious spies, power-hungry korah, and the latest incident with pinchas), we reach a grand total of 601,730 israelities.

this seems like a crazy numbers game.  approximately, 40 years and seemingly countless deaths later, the census reveals that we are within just 2000 people of that original population census taken when we first entered the desert.  in our parsha, the Torah notes, “among these was not one of those enrolled by moshe and aharon the priest when they recorded the israelities in the wilderness.  for the Lord had said of them, ‘they shall die in the wilderness’” (bamidbar 26:64-65).

actually, two people managed to survive, three if you count moshe.  caleb and joshua, those two trusty spies, who actually had faith that God would deliver the jewish people to that land flowing with milk and honey, have been spared among all those lost.

an entire generation has been wiped out and seemingly replaced with 600,000 more israelites waiting to enter the promised land.  once again, moshe relays all of God’s instructions to the people, regarding shabbat and the holidays, in order to induct this new generation into God’s service and covenant.  and yet three people have been through this all before.  three people carry with them the memory of the friends and family that stood by their side the first time around.

may we carry with us the memory of our loved ones in each moment of our lives,

i like thinking of this poem in connection with this week’s parsha:

i don’t Know if history repeats itself, yehuda amichai

I don’t Know if history repeats itself
But I do know that you don’t.

I remember that city was divided
Not only between Jews and Arabs,
But Between me and you,
When we were there together.

The city has been reunited
But we haven’t been there together.
By now I know
That History doesn’t repeat itself,
As I always knew that you wouldn’t.