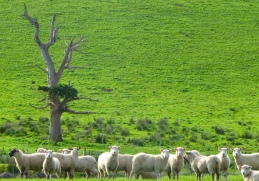 moshe has come a long way from his days of “כבד פה וכבד לשון, slow of speech, slow of tongue” (shmot 4:10).  he has not only transformed bnei yisrael from a stiff-necked, fickle bunch of wanderers into a God-loving, jewish people, but he himself has undergone a tremendous transformation.  in the course of his adventures in the desert, moshe has grown into an articulate, inspiring leader who has managed to keep this nation from falling apart for the past 40 years.

and now, generations and generations later, he finds himself in the precarious position of being “on the way out.”  his successor joshua has not only been named but officially commissioned in a ceremony before the whole community.  each instruction he receives from God bears with it the weight of “do this last thing before you die.”  and moshe finds himself, on one hand, the leader of the jewish people and on the other hand, a man waiting for his last breath.

with all of this mind, in parshat matot, the tribes of reuven and gad decide that they don’t want to enter the promised land after all.  in fact, the land on this side of the jordan seems better for this cattle-bearing people, and if it’s all the same, couldn’t they just inherit this fine piece of land rather than cross the border with their brethren?  (this they say to the very man who is forbidden from entering the promised land they take for granted).  this request is met by a seemingly disproportionate tirade from moshe in which he scolds the tribes with something akin to “you’re just like those other sinners, those spies who betrayed God when they turned the people against the land.  and they all died in a plague.  unless you too want to be wiped out in plague, you’re coming with us.”

i have to wonder in this transitional period between two lands, between two leaders, on the brink of the jordan and of war, both how the people view moshe as their leader as well as how moshe views himself in relationship to the people.

before i worried,
can i speak?  now, i wonder
if they will listen.

may we stay strong in ourselves even in times of transition,