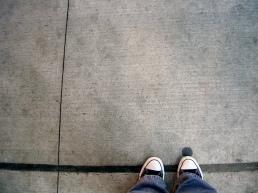 on the border, still

there’s not so much new here in parshat ekev.  moshe continues to reiteritate the people’s indebtedness to God and the importance of upholding “ומצותיו ,משפטיו ,חוקותיו: His commandments, laws, and rules” (devarim 8:11).  but buried within moshe’s retelling of חטא העגל (sin of the golden calf), an interesting discrepancy arises.

here’s the scene: moshe’s just received the ten commandments, a hugely important moment for the jewish people.  he and God are having a moment together when suddenly God sees those stiff-necked people down there making a molten golden calf to worship in the absence of their leader.  God says to moshe, “רד מהר כי שחת עמך אשר הוצאת ממצרים: hurry, go down, because your people that you brought from egypt have acted wickedly” (devarim 9:12).  notice God’s language:  your people.  that you brought out.  the burden of responsibility falls on moshe.

scene change just moments later:  moshe’s trying to convince God not to destroy the entire jewish people in His anger.  moshe says to God, “והם עמך ונחלתך אשר הוצאת בכחך ובזרועך הנטויה: yet they are Your people that You brought out in Your great might and Your outstretched arm” (devarim 9: 29).   moshe refuses to let God off the hook so easily.  these are Your people, You brought them out, and You can’t give up on them so easily.

in this together,
let’s not go pointing fingers.
parenting is rough.

when the going gets tough, stick together,