Posted on September 16, 2011 by David Bogomolny

“All of my grandparents were holocaust survivors, and they all grew up in traditional Jewish families in Hungary… I want to be a part of the tradition that they grew up with… and at Pardes, I can begin to reclaim it.” 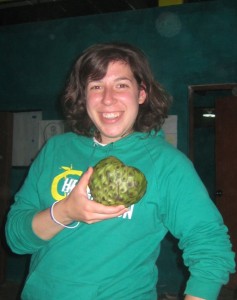 Amy arranged her arrival to Israel to overlap with the final weeks of her brother’s Israeli army service. After all, she had to ensure that her homemade batch of hamentashen reached its intended recipient before Purim! Her semester-long WUJS Jerusalem Program began in March, allowing her to spend time with her family after college graduation before flying off for a semester of Torah study in Israel.

She’d first heard of Pardes during her 2010 AJWS summer volunteer mission to Peru; volunteering had long been a significant part of Amy’s life, and she ultimately received the ‘Tzedek and Social Justice Award’ from the Hillel of Greater Toronto for running the York Hillel’s “Bathtub Project”, which collected toiletries from students on campus, and donated them to women’s shelters in the city. She was also involved in other Hillel volunteer projects, such as “sandwich-making for the homeless”, and “packaging Chanukah gifts for children”.

As a certified personal trainer and dancer of many, many years, Amy continued volunteering in Israel through WUJS, working at a Jerusalem community center for the elderly, even as she studied at Pardes in the Spring. The pluralistic community at the Pardes Institute was very comfortable for Amy – very similar to her AJWS volunteer group – and she eagerly enrolled as a full-time Pardes Summer student. In Leah Rosenthal’s Gemara class, the young woman was excited to hone her text skills, marking the first time she had ever studied the Talmud.

“It’s nice to know that when you get older, you don’t lose your sense of humor!”

Her Bat Mitzvah had been in Israel (at Masada), and Amy had been to Israel several times as a college student on Hillel trips, but her time at Pardes was particularly special for her- and it allowed her the flexibility of studying Torah during the summer before she began graduate school 🙂