Posted on November 8, 2011 by The Director of Digital Media

This year we are very lucky to have Rabbi Hayim Leiter mentoring us in the Beit Midrash, but we only just found out about his passion for surfing! Check out his most recent dvar Torah at The Jewish Surfer: 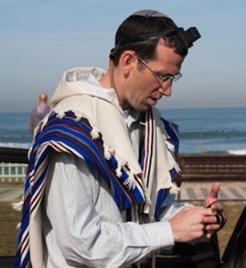 If you are like me, you only recently made the switch to the “i” revolution.  It hasn’t been that long since I first got my iphone, and because of that I’m still discovering all the amazing things it does.  But the feature that I most value is the ASP app (Association of Surfing Professionals) I got a few months ago.  Thanks to this new innovation, I am able to watch some of the most amazing surfing LIVE!!  If you don’t have it, I strongly recommend downloading it.  For me, it’s been like I finally have my own Superbowl.  I stay up until all hours to watch the contests.  I don’t want to miss a minute.

So as I’m sure you can guess, there is really only one reason why I watch—Kelly.  Kelly Slater is indisputably the greatest athlete, maybe of all time.  And this last week he was in true form.  Can you say 11?  That’s right ladies and gentlemen, he’s done it yet again.  Kelly is officially the ASP World Champion in a career that has spanned over 20 years.  He holds the record of being both the youngest and oldest world title holder.  In his outstanding career, he’s amassed over $3 million in prize money alone; this, of course, is not representative of all of the endorsements and sponsorships he also has amassed, which, no doubt, has helped him live quite a “comfortable” life.

But despite all of these accolades and feats of near super-human ability, Kelly surprised us yet again this last week.  What I failed to mention was that Kelly won his 11th world title twice.  Last week, on Nov. 2, Kelly was awarded the world title in San Francisco.  At that time, the ASP calculated that all Kelly was required to do was to place ninth or better in this last contest and he would have enough points to win the overall year contest.  Kelly won his heat that day, securing himself a ninth place finish in the contest.  Later that same night, he received a Tweet from a fan stating that he may not have won just yet.  Apparently, there was a miscalculation because of a few tie ninth place results between Kelly and the current second-place holder Owen Wright.  As it turned out, Kelly had to win one more heat to seal the deal, which he did on Nov. 6.  And that final win was against some of the hottest up-and-coming youngsters who joined the tour midyear.  But even though this was one of Kelly’s most solid displays of physical prowess with one of the greatest victory lap barrels ever seen, it still wasn’t the most impressive aspect of this unusual title race.

Kelly Slater amazed us once again, but this time it was not only with his athletic abilities, but with his morality.  The aforementioned Tweet was to Kelly alone.  None of the judges or ASP staff had been notified.  And this piece of information could have cost him the title.  Although it was extremely unlikely that Owen could have done the amount of winning required and that Kelly would have done the amount of losing necessary, the possibility was still there. Kelly could have lost it all.  But keep in mind, no one knew!  Kelly could have simply walked away and ignored the message, and almost certainly he still would have won.  He could have thought, “Who would know the difference?”  But that’s not the type of person he is.  He brought the incongruence to the attention of the director of the ASP and made it public.  And then, like the true showman and ambassador of the sport of surfing that he is, he went on to win with a clear conscience.

In this week’s Parasha, VaYereh, we have a similar occurrence.  Avraham Avienu was given a piece of information by God.  HaShem told Avraham that he was going to destroy Sdom and Amora because of the evil its citizens were doing.  With this piece of information, Avraham had a choice.  He could have internalized the message from God, and then could have realized that no one else in his generation had heard what God had said and he could have kept it to himself.  He could have thought, other than my nephew Lot, those people are not my concern, and most likely they are all bad.  Who will know the difference? But that’s not the type of person Avraham was.  In hearing God’s plan, he immediately responded, “Will you also stamp out the righteous along with the wicked?  Perhaps there are 50 righteous people in the city (in S’dom), would You still stamp it out rather than spare the place for the sake of the 50 righteous people in the midst of the city?”  The conversation continues with Avraham attempting to bargain to save the city for less and less righteous people, until he ultimately loses the argument to HaShem.  But his motives were of the greatest importance.  Avraham had a clear moral vision of the world.  So much so, that he called God into question when HaShem didn’t seem to be living up to that standard.  Avraham demanded of God that both the world and the cosmos be subjugated to law and justice.

In a similar vein, Kelly Slater, although not a Jew, followed in Avraham’s footsteps this week.  He was not concerned with himself, his honor, his monetary gain, or even who wronged him in this miscalculation.  He was concerned, as Avraham was, with doing the right thing for it’s own sake.  When you think of all of the stories that litter the news of scandal after scandal in the professional sports world, what Kelly did is nothing short of amazing.  Seeing his behavior made me realize what a true champion he is and it made me proud to be both a surfer and a Jew.