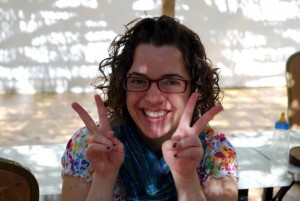 Naomi grew up in a Modern Orthodox community in South Miami, where her family helped found a Young Israel. She was immersed in Judaism from a young age  – shul, day school, day camp – but rarely in a community as diverse as Pardes.

It is in a Modern Orthodox community that Naomi feels most at home, but that does not preclude serious issues of identifying within the community as bisexual.  Since she was in high school, struggling with trying to fit into the Jewish community has defined much of Naomi’s Jewish life.  While at student at the University of Michigan she affiliated with the Modern Orthodox community while heading Ahava, the Jewish LGBT group on campus; stitching together both identities. Her creative senior thesis was on being queer and Orthodox, and it was published in book form.

The year after graduating, Naomi worked as an AmeriCorps Service Member in the MAP program (Michigan AmeriCorp Partnership) for one year. As a service member she headed a division at the University of Michigan’s Ginsberg Center for Community Service focusing on interfaith dialogue and service work. Drawing on her own experiences, she was able to lead students in difficult conversations about the intersection of religion and social justice.

After considering exactly what aspects of her experience in AmeriCorps she liked best, Naomi applied to teach abroad and ended up spending the last two years in Seoul, South Korea.  (To see Naomi’s take on being Jewish in Korea, click here). After being constantly surrounded by very (Jewishly) well-educated friends and family in the States, Naomi didn’t think there was anything unusual about the level of Judaic education she received until settling in Korea. In Seoul, having a Jewish education at all was unusual in the Jewish community.  Naomi found herself as a quasi-leader/halakhic authority within the community, a position that she never thought she would be in.  Until her time in Seoul, she had never considered the Jewish education she had received particularly valuable, and it was then that she realized that if she wanted to be a leader in whatever Jewish community she was to end up in, she had better invest more in her own Jewish education.

After her Orthodox day school education, Naomi was looking for an open, yet serious environment to study in. She made the decision to study at Pardes to ‘fill in the gaps’ in her halahic and textual knowledge.

Her favorite classes are Hassidut and Intermediate Halacha, where her extensive knowledge of Jewish law is actually useful. Naomi’s day school background provides an ever interesting foil to learning at Pardes, where, for example she often has trouble untangling actual Chumash from Rashi’s commentary. With them being sometimes taught as one and the same in day school, Naomi often felt like she ‘knew the punch line’ to all the exegetical questions that arose in class.

I like Hasidut with Levi Cooper a lot, it’s the reason why I’m taking Halacha.  Levi Cooper reminded us to make sure we are getting what we want to out of Pardes, and since I came here to study Halacha I had to adjust my lens and make sure I was focusing on learning Halacha.

Next year is still uncertain, but Naomi is looking into programs in Jewish Education with a focus in Special Education, a program in Speech Language Pathology, or Drisha’s Artists Residency.