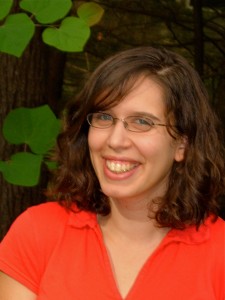 Deborah grew up in Amherst, Massachusetts, where her family was active in a local chavura, as well as a Conservative shul. When Deborah was eight years old, her mother decided to attend the Reconstructionist Rabbinical College (RRC), and her family moved to the Philadelphia area. While studying at RRC, her mother also became very involved with Rabbis for Humans Rights (RHR) and specifically in protesting the genocide happening in Bosnia at the time. Although Deborah was somewhat resistant to active participation in the Jewish community, viewing Judaism more as her mother’s religion than as her own, her mother’s involvement with RHR had a lasting moral impact on her.

When Deborah was in tenth grade, her mother accepted a position as a congregational rabbi in Westfield, Massachusetts (which she still holds), and her family moved back to Amherst. Deborah found moving again quite difficult, and the fact that she perceived the upheaval as due largely to her mother’s position as a rabbi did not ease her already tense relationship with Judaism. Although she continued to be marginally involved in Jewish life during high school, she did so largely out of a sense of familial obligation, and intended to disassociate completely from Judaism once she went to college. And yet, despite this sense of disconnection, Deborah was consciously looking for meaning in life; her belief in God, and a need to understand how God could be operative in the world, drove her to continue exploring what role, if any, religion could play in her life.

In college, Deborah found a meaningful way to connect to religion: academia.  Due to an interest in environmental studies, she enrolled in a course on religion and the environment and found herself drawn towards the field of religious philosophy, although she avoided courses focused specifically on Judaism.  It was only during her final year of college, in a course on feminist interpretations of evil, that she began to explicitly engage with Jewish perspectives on the religious questions that motivated her.  Through that course of study, Deborah realized that her point of entry into the tradition was academic. Academia offered her a way to make the tradition her own, while maintaining enough distance that she did not have to accept all the traditional doctrines of the religion.  Her interest in Jewish perspectives on the problem of evil sparked a need to study further, this time with a Jewish focus in graduate school. It was at the University of Virginia, where Deborah is currently completing her PhD in Religious Sudies, that she stumbled upon Midrash as the perfect conduit.

“Midrash is fascinating because it does not have a need to be systematic.  It is just people talking about their texts, about their lives and about God, though stories that often appear to be wildly inconsistent. And the fact that this apparent inconsistency is not a problem is what draws me to it, because I think it reflects something important about how we experience and engage with the world.”

Deborah was advised to come to Pardes by her faculty at UVA, because they thought it would provide the best environment to enhance her skills to enrich her PhD research.  While apprehensive about coming to live in Israel, Deborah was interested to see what kind of life traditional Jewish texts have outside of themselves, and their impact on different individuals who hold them to be centrally important.

Two classes have stood out as highlights of Deborah’s time at Pardes so far: Judy Kilstner’s Chummash class, which she likes because it walks a good line between being critical and analyzing the text closely and being open to bigger questions and personal engagement; and Levi Cooper’s Chassidut class, which has created for her the rare opportunity to really engage with and challenge her personal connection to Judaism, instead of retreating behind an academic lens.

Deborah also really loves the community Pardes creates. She finds the other students to be fascinating people worthy of respect both for how they live their lives and how they think. “Pardes would not be what it is if it were not for the other people who choose to come study here.”