In looking back at our Poland Heritage Trip in January, it’s quite difficult to fathom just how much we witnessed in 5 short days. We began with the colorful tapestry of Jewish life that existed in Warsaw and Lublin, which was hardly a foreshadowing of what was to come. We tapped into the spirituality of the Chasidic leaders through visiting the tombs of Hassidic masters, such as Rav Elimelech of Lezajsk. We visited Krakow, and painted a picture of the colorful tapestry of Jewish life that existed by experiencing the beautiful old shuls and telling stories about the scholars who led the community. We stepped into the horror and disbelief that is Belzec, Majdanek and Auschwitz, facing head on the reality of what happened on cold winter nights while the feeling of death lingered in the air. We explored the concept of heroism through studying the Warsaw Ghetto Uprising, and re-defined what it meant to have courage and conviction in the face of bleak circumstances. We searched for some sort of redemption, as we learned about righteous gentiles like Oskar Schindler while standing outside of his factory, and realized just how much individuals like him risked to save a few Jewish souls. 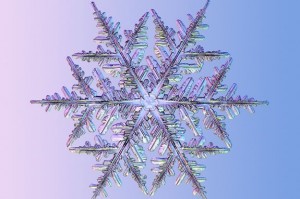 The journey our group took during those 5 days forced us to confront a tragedy in our collective history that is painful to address. It would have been much easier to stay in the Beit Midrash. But in freezing temperatures, we trudged through the snow, intent on searching for some sort of answer to our existential questions. I came away from the experience with more questions and less answers than ever before. However, as I was standing in Birkenau trying to fathom what was before me, a chance occurrence gave me a sliver of clarity. As our tour guide’s words pelted us with the alarming numbers of death and cruelty that occurred in the exact spot where I stood, the snow started to fall. I happened to look down and saw on my glove a snowflake in the shape of a Magen David. While it wasn’t an answer, it felt like a still, small voice, perhaps even a quiet charge. And my realization was this: I was standing, by my own choosing, in a place where hundreds of Jews wanted to be freed from their suffering. And through the consistent development and commitment to my personal Jewish identity, Torah study and service in the community, I could in some small way honor and uplift their memory. While it wasn’t an answer to the many questions racing through my head, it was at least a direction gleaned from a symbol that connected me to previous generations.
Today when I enter the Beit Midrash to embark on deepening and expanding my Torah knowledge, I am aware that my small actions are easily taken for granted and that I am privileged to carry on our tradition. My Jewish brothers and sisters can no longer carry this on, and in memory of those who perished, I will hopefully begin to regain a tiny fraction of the communal knowledge, culture and vibrance that was destroyed in the Shoah.