Hey, remember me? Sorry it’s been so long since I posted last, but things have been pretty busy here. I’m not exactly sure where I left off last, but I think it was somewhere around sukkot break (called one of the chagim aka festivals), so let me jump to that since that included plenty of excitement. 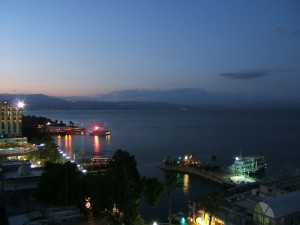 During the week of sukkot break, I went with 2 friends from Pardes up north to Tiberias. We hopped on a bus on Wednesday morning without much of a plan other than wanting to sleep on the Kenerret (also known as the Sea of Galilee – the only fresh water source in Israel, and the only source of water other than the Mediterranean) . So when we arrived in Tiberias, we began as any proper American would by stopping at the (kosher!) McDonald’s right outside of the bus station and getting awesome milkshakes for ourselves. Then, after exploring for a bit and swimming in the 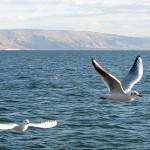 Kenerret, we saw a mountain by us and decided that we wanted to climb it – so we did. We wandered around until we found a trail up, and eventually made it to an amazing point where we could see the whole Kenerret, mountains, and an aerial of Tiberias, at which point we (well at least I) spent some time reflecting and meditating over our time so far and getting to look back at Jerusalem from afar in order to properly think about it. Also, it was nice to finally be near a body of water. We then hiked more and finally wandered around the Kenerret, until we found a great place to set up camp, about 15 ft. from the water. Or I guess I should use the measurement system of the country and say about 5 meters. But you get the idea.

The next morning, we decided to head over to Tsfat, so we spent the day wandering around the town; it was so great to be back there, since it had been about two years since I had been there. Also, on the way there, our bus broke down and we had to switch, but, being the unplanned travelers that we were, we got to experience it as just another cool part of our journey instead of something that got in the way. Then, after coming back to Jerusalem that night, I hopped on the first bus out to Tel Aviv the next morning (~6am) to partake in the massive 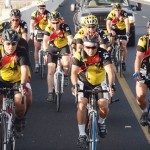 cycling event that was going on there. They blocked off about ten miles of highway and a bunch of major roads through the city, and I got to join thousands of bikers in doing a 42k through the city, and it was great; definitely a nice way to ease back to Tel Aviv after not being there for ~2 years either. Then, after finishing up the ride, I went to hang out and stretch on the beach and jump in the Mediterranean and think about how 24 hours earlier I had woken up in the Keneret. Definitely a pretty packed few days.

Since coming back from break, we’ve been back in class for ~2 weeks now and it’s definitely been nice to be back in routine after about a month off for holidays. And now we don’t really have too much time off in the next few months other than a 3-day hike in November and a week off for Hanukah, so this time coming up will be a great time to start really getting into the learning and developing a routine which will be great. I’ve been reading a lot lately also, and I’ve really been enjoying two books in particular – “The Secret Life of G-d” and “The Sabbath”.

There was a man who dreamed that he saw his whole life’s journey as footsteps in the sand. Sometimes there were two imprints, his and G-ds. But during the parts of the trek that were most difficult, he saw only one set of footprints. He complained to G-d: “G-d, You promised me that You would always accompany me in my journey. How is it that during the most difficult times in my life, You disappeared?” G-d responded, “I have always been with you. The reason why you only see one set of footprints is because during your most difficult times, I carried you. Those footprints are Mine.