An integral part of R. Daniel Roth’s חוּמָשׁ class (this year’s first installment of the Peace and Conflict track) is the summaries that students are asked to create at the end of a unit. Rabbi Roth gives free creative reign to his students to use whatever methods speak to them most—written mediation notes, art work, essays, etc.—to understand the conflict from multiple perspectives. This is often achieved by speaking directly through the key actors in a given unit. Below is one such summary from a second year PEP student who seeks to understand the main narratives in the familial conflict in פרשת נח based upon the insights of the commentators (Jubilees, Philo, Targumim, Baruch, Targum Neophyti, בראשית רבה, מדרש תנחומא, בבלי סנהדרין, רש”י, ספורנו, ראב”ע, רמב”ן, רד”ק, Cassuto, Gunkel, Armstrong).

Growing up, things were difficult ever since I could remember. It had been getting harder and harder to make our daily bread from the cursed soil, and the community we lived in was steadily declining. But it seemed we were stuck—no matter where we thought of moving to, we heard terrible accounts of robbery, rape, and murder. What made matters worse is that there was no one to come and protect the victims or mete out justice to the perpetrators. Common law was in the hands of the vulgar and brutish, and the name of God had long ceased to be in the mouths of the people. 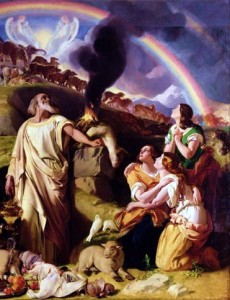 My father died a wearied man, but for some reason he thought something special of me. He named me נֹחַ after his hope that I would bring comfort to the world. I am not sure what comfort I brought. When I was 500 years old, ה’ came to me and told me to rebuke the evil-doers around me and in the world. This was Plan A: attract, instruct, and return.

Plan B was a terrible plan I did not even want to consider: a מָבוּל the likes of which man has never before seen that would come to wipe everything away—basically a tool designed to undo creation. I did not want this. How could anyone? So I got to work and I spread ה’’s message. But no one listened. Worse, they jeered and mocked me for trying to help. I rebuked them and they refused to change. I warned them of impending destruction at the will of ה’ if they chose not to turn back. They had the gall to say there was no God, חס ושלום! I kept working on the ark throughout that century. Every day that the boat got bigger, the grim reality of Plan B got closer. The years passed into decades until finally, the animals came and my family came. As my sons and daughters disappeared into the boat’s interior, the brutes came out with their weapons and torches. They had not come to talk. We were protected only by packs of bears and wolves and other ferocious animals which kept them away from the boat.

The flood came. Those forty days and nights and then the waiting period that came after was the worst. A whole world had been destroyed. When the waters went back to their place, we came out of the boat to a ravaged land. There was nothing left for anyone.

So I did what seemed best, I tried to recreate the world as God would have wanted it. I rebuilt from the very beginning, starting with the tree of the knowledge of good and evil. We sacrificed to God, and I planted the tree, and waited. A few years later, I made a drink from the tree and offered up another sacrifice on the anniversary of our coming out of the ark. We rejoiced before God. נעמה, my wife, thought that planting a tree was perhaps not the only thing we could do to help recreate the world. We could also do what comes next in creating a world. We could have another child. So I came close to נעמה that night and in her tent.

But there was someone else there with us that night. It was hard to see in the dark, but I from the movement of the tent cover and the shape of the figure, it must have been like כנען, חם’s son, was watching us. What an embarrassment!

When we woke up the next morning we heard worse. כנען had gone to tell his father about seeing נעמה and me in the tent, and instead of chastising his son, חם had talked about us in the public square. Why should such a private matter be publicized? I had been humiliated by having my ערוה exposed and now I had been publicly denounced by my son and grandson in my time. What else could I do? חם had been blessed by ה’, as had all of my sons. Who am I to go against God’s blessing? So I cursed חם’s son so that they should both share of the burden of the pain and suffering I now carry. נעמה and I are very old and it is not often that we are together. It may be that what stopped us that night may have stopped us for good, and we may never have another child. It is difficult to be described by God as “צדיק”. It is even more difficult to be so. My judgment was just. It was מידה תחת מידה.

Where do I begin? My son is cursed and I am shamed and it gets harder and harder to go on. 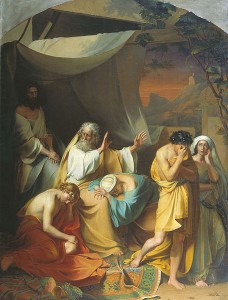 I supposed I should start at the last days of the ark. . . . When we left there were many confused thoughts going through all of our minds. We hadn’t been adequately prepared for the Flood and we certainly didn’t know how to process the destruction and horror we imagined happening outside the ark while we were protected and alive inside. Seeing the thousands of dead, the washed landscape, the complete absence of any human or animal life once we got off the boat…that was too much.

We needed something to give us hope and strength to start over. We needed God on our side. So the sacrifice was natural, it was quickly and collectively agreed on. But afterwards things got a little complicated. My brothers had their own families to take care of and I mine. We had to talk about how we were apportioning the land so we could begin assigning responsibility for building cities and roads and cleaning up what the Flood had wrought.

Dad…that’s another story. The flood changed him. I will always have respect for him but I was really worried for him on the boat. He never slept – he just worked and worked, with no sleep, always checking on even the lowliest of animals. He was even bitten by a lion once (for not coming with the lion’s food quickly enough!). This gave him a powerful limp he still has not recovered from. I’m not sure if he ever well. So you can imagine that when we emerged, Dad wasn’t really in any shape to work. With his limp, his over-exhaustion, and his depression, he was unfit for hard labor. But he tried anyway. There was no one left to preach to and the only other job he knew was the one his father had trained him in: farming. So Dad found an old vine sticking up from the muck at the bottom of the mountain, and he began working to re-infuse it with life. You gotta hand it to him, after a few years, he had the beginnings of a beautiful vineyard and he was even making new wine from it.

But we rarely saw him. It seems like he put all of his troubles into his work and really lost himself in it. I couldn’t take it anymore. I had to say something to him, “take it easy”, “let us help you”, anything. One day I went to check on him in the middle of the work day. I saw him lying naked in his tent, clearly drunk. His tent was a mess. I had no idea what to do. I was embarrassed for him and myself, and afraid that I had seen this. I quickly ran to town to tell my brothers what I had seen, and to ask them what we could do about it. I have always looked up to שם and יפת and I trust them in everything. They had a genius idea of a way to cover Dad up without seeing him. So they did this. I was too embarrassed to go back there, so I stayed away hoping to hear good news. Meanwhile, I tried to figure out a way to make things nice for him when he came back home.

But when I saw him, he flew into a rage. He said he knew I had been in the tent and he cursed my son as a slave to his brothers. What did כנען do to deserve this? What did I do to earn this fate? I was the one who came to check on him in the first place. Dad has certainly changed since the flood and I don’t know what to do now. I feel now not only estranged from him, but from everyone else, as if in a personal exile.

We may move soon because שם and יפט’s wives have stopped inviting my wife over, and we see less of my brothers in town. I guess this is just the way of the world. I hope to see my family again but I’m not sure if that will happen the way things seem to be working out.